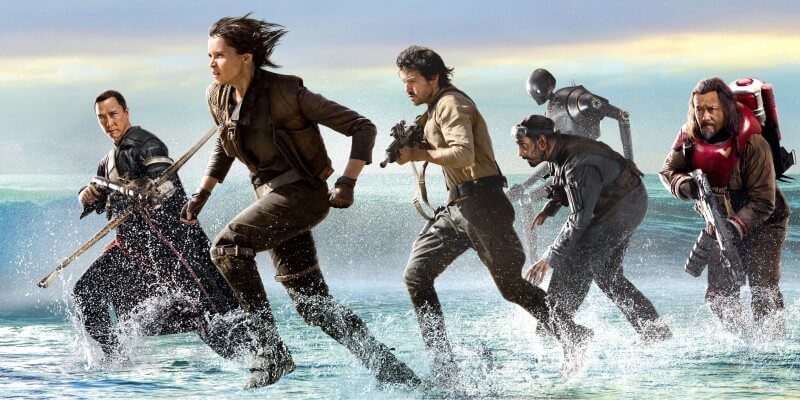 Next on the slate is Obi-Wan Kenobi from director Deborah Chow, but sometime shortly after, Star Wars: Andor will see the return of Diego Luna as the titular Rebel spy, and the series, which boasts the most episodes of a live-action Star Wars series, may have been cut even shorter.

Luna will reprise his role of Cassian Andor from the fan-favorite and commercially successful Rogue One: A Star Wars Story (2016) alongside Stellan Skarsgård, Adria Arjona, Fiona Shaw, Denise Gough, Kyle Soller, and Genevieve O’Reilly. Forest Whitaker will also return as Partisans leader, Saw Gerrera — the character that first appeared in Star Wars: The Clone Wars before making his live-action debut in Rogue One.

His arrival in the Star Wars story came with Felicity Jones’s Jyn Erso, with the two being pivotal in the Rebel Alliance’s battle against the powerful Galactic Empire, acquiring and transporting the Death Star plans which ultimately ended up in R2-D2. The ending of Rogue One, with Darth Vader’s attack on the cruiser and the arrival of a young Princess Leia, albeit via CGI, is perhaps one of the most surprising moments Star Wars has given fans in recent years.

Andor will see the Star Wars saga explored anew, and will be set five years before the events of Rogue One. In a new interview with Vanity Fair, Andor creator and showrunner, Tony Gilroy, describes the upcoming Star Wars series as a “novel”, revealing that the first two seasons — made of 12 episodes each — are two parts of one whole. He said:

“We don’t have Alan Tudyk,” Gilroy confirms. “Not yet, anyway.” But fear not. Prep for a second season is already underway, and the story of how Cassian Andor met that former Imperial battle droid may be told then. “It is a second season, but it’s really, for me, the second half of the novel,” Gilroy says. “This first season is about him becoming a revolutionary, and the second 12 episodes take him into Rogue One.”

While fans may be elated to discover that Alan Tudyk’s wise-cracking K-2SO droid may appear in the future second season, what is interesting here is that Gilroy seemingly suggests that Andor will be two seasons at most. If the second season takes Cassian Andor’s story up to the events of Rogue One, then there really aren’t many places left for the series to go.

This “novel” format for the first two seasons comes just weeks after Andor composer, Adriano Goldman, revealed that the spy-thriller series was originally slated for five seasons, but was reduced to three. Now, it is possible that Lucasfilm is shortening the series even more and will use the 24 episodes to tell the complete(ish) story of Cassian Andor and the young Mon Mothma, played again by Genevieve O’Reilly.

O’Reilly starred briefly in Star Wars: Episode III — Revenge of the Sith (2005), before orchestrating many of the Rebellion’s actions in Rogue One over a decade later. Obi-Wan Kenobi will, of course, play into the tragic events of Revenge of the Sith when it brings back Ewan McGregor and Hayden Christensen as Obi-Wan “Ben” Kenobi and Anakin Skywalker/Darth Vader, respectively. According to Gilroy, Andor will give Mon Mothma even more agency, with fans expected to be tweeting about Mon Mothma following the first season’s fourth episode.

So, while the second season brings Cassian Andor to the events of Rogue One, and if there is a third season brewing, it may be that O’Reilly’s Rebel leader becomes the focus of the live-action event in the future. The Star Wars character does appear in the original trilogy, after all, and thus the Skywalker Saga movies following Andor and Rogue One.

Are you excited for Andor? Let us know in the comments down below!