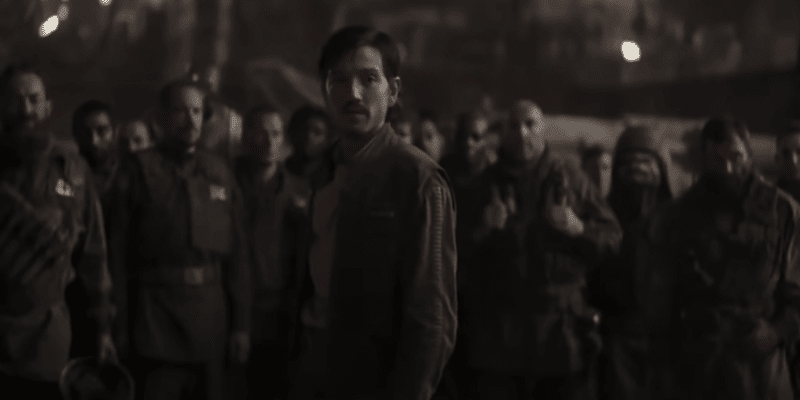 Lucasfilm and The Walt Disney Company clearly have a great deal of faith in one upcoming live-action Star Wars series.

Andor, starring Diego Luna as Captain Cassian Andor from Rogue One: A Star Wars Story (2016), is set to receive a second season before Season 1 has even debuted.

Previously, Alan Tudyk (Firefly, I, Robot, A Knight’s Tale)— who played fan-favorite droid K-2SO in Rogue One — teased that the movie spinoff prequel series would be receiving a Season 2 when he said:

“They’re shooting it right now, I’m not in it. But, if it stays on the air, stories keep getting told, I’ll end up in there.

Now, Swedish actor Stellan Skarsgard, who will appear in Andor, has confirmed that the second season will film this fall, perhaps aligning with the show’s reported fourth quarter debut:

“We start with ‘Dune 2’ in July. And then in the autumn, it’s time for the second season of the Star Wars series ‘Andor’.”

Although not much is known about the exact plot of Andor, it is unlikely that popular Rogue One character Jyn Erso (Felicity Jones) — daughter of Death Star saboteur Galen Erso (Mads Mikkelsen) –will return for the show since it is set about five years before the standalone Disney Star Wars film.

In the Star Wars timeline, the two did not know one another prior to the Rogue One movie, which is set mere days before Star Wars: Episode IV – A New Hope (1977), in which George Lucas first introduced Star Wars fans to Jedi Knight Luke Skywalker (Mark Hamill), Princess Leia Organa (Carrie Fisher), Han Solo (Harrison Ford), and, of course, legendary villain Darth Vader.

At this time, we know Andor will follow Rebel spy Cassian Andor, who is among the Star Wars universe’s most resourceful (and occasionally morally suspect) heroes. Andor — who also goes by various aliases, including Aach, Joreth Sward, Fulcrum, and Willix — is known to go to any length to complete his spy missions successfully.

…adventures of Rebel spy Cassian Andor during the formative years of the Rebellion and prior to the events of Rogue One: A Star Wars Story…The rousing spy thriller will explore tales filled with espionage and daring missions to restore hope to a galaxy in the grip of a ruthless Empire.

You can watch the sizzle reel for Andor below:

Are you excited for at least two seasons of Andor?