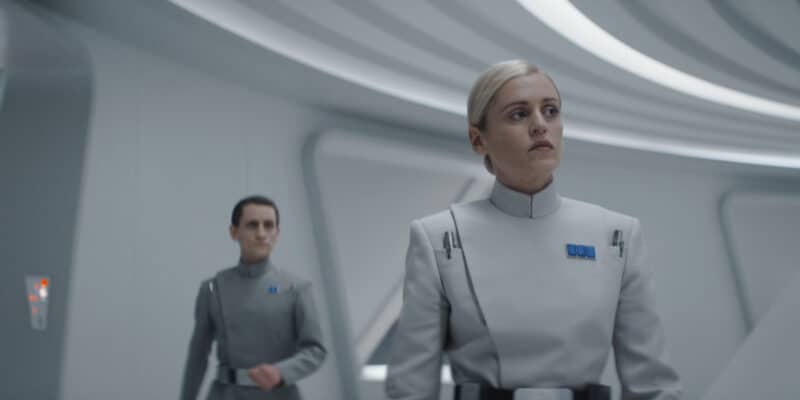 How do you follow up on one of the most action-packed hours of Andor yet? The answer: dial up the suspense.

After ‘”The Eye” saw Cassian Andor (Diego Luna) and his rebel compatriots flee their Aldhani heist into a stunning celestial event, this week’s episode deals with the fallout. The Imperials, embarrassed, are looking to clench their fist on a shaken galaxy; the oppressed have had a taste of hope.

Let’s get into it.

We open with everyone’s least favorite Imperial simp, Syril (Kyle Soller), enjoying yet more blue milk at home. His mother (a sure candidate for the Real Housewives Of Coruscant, if I ever saw one) is still pushing for him to dream bigger. Syril looks nothing but defeated as she even pulls him up on his dress sense. A tailored collar? It screams desperation.

At the Imperial’s ISB HQ, last week’s theft has gone down less than well. It’s even led to the first name drop of Imperial royalty: Emperor Palpatine has spoken personally to command — none other than Colonel Yularen — about the matter. Their response is swift and crushing. If the Rebels want to use traditional holidays as cover, they’ll take them away. An increased tribute tax. Emergency powers for surveillance, search, and seizure.

From one side of the fight to the other. We are back to Mon Mothma’s (Genevieve O’Reilly) favorite gallery, Luthen Rael’s (Stellan Skarsgård). The proprietor is there to greet her personally, as always. And it isn’t long before Mon’s suspicions — that he might be behind the recent disturbance — are confirmed. They are both on the same side, but not quite aligned just yet with their idea of what their resistance involves. Luthen sees this as a starting pistol for action. Mon Mothma is hesitant, keen to continue to shore up resources. His militancy alarms her, even though she is a key part of the chain. But as Luthen says: “Has anyone ever made a weapon that hasn’t been used?” They’re rebels, but it’s not an easy alliance just yet.

Checking in with Syril, he’s in the Imperial equivalent of a phone farm. Rows upon rows of workstations replete with glowing monitors and dead-eyed imperial drones fill a huge space. This is the Bureau Of Standards. He’s allocated to ‘fuel purity’, and greets the news with a fitting grimace. Elsewhere on the capital world, Kleya (Elizabeth Marki) moves at a pace, dressed for all the galaxy like an incredibly chic Red Riding Hood. She’s meeting Vel (Faye Marsay). But it’s bad news for Cassian. Similar to Luthen earlier, Kleya demonstrates a callous outlook on life, not so dissimilar to her Imperial enemies. Knowing he is still alive, with knowledge of their operation but no desire to be part of it, makes him a threat. She wants him dead. Our lead is being hunted from both sides now.

Finally, we’re checking in with the man himself. It seems a bad move, but Cassian has gone home to Ferrix. Maarva (Fiona Shaw) is more than a little surprised to have him walk back through her door. She spills the beans about Timm’s (James McArdle) betrayal, and he tells her his plan to take his earnings and buy them both a new home in a distant spot. She seems less than convinced, but he heads off to meet Bix (Adria Arjona).

Back on Coruscant, Mon Mothma is in a nest of vipers. She has one friend among them: Tay Kolma (Ben Miles), who she has known since childhood and is a prominent figure in Chandrila’s financial sphere. As she alludes to revealing something political, something only three people in the galaxy know, he stops her; he thinks his own views might be a little strong, especially among her Imperial friends.

He has no idea who he’s dealing with. In an effort to access her family’s finances, to help fund the rebellion, she decides to bring him into the fold. And she tells him Mon Mothma the meek, idealistic senator is a lie. “I’ve learned from Palpatine. Show them the stone in your hand and they miss the knife at their throat.” Before they can discuss further, Perrin Furtha — frontrunner for the obnoxious deadweight husband of the year — intervenes to sweep her away to some waiting partygoers.

On Ferrix, Cassian’s reunion with Bix has gone less than well. Similar to Maarva, she can’t believe he’s back, and urges him to go. He’s chasing information on Luthen, mainly to make sure he can disappear successfully. Bix doesn’t crack, and he asks to be forgotten. She says she’s forgotten before. Cassian needs a lesson from the Obi-Wan Kenobi guidebook to vanishing off the grid.

The next morning, after a flashback to the death of his father (who appears to fall victim to some Phase II Clone Troopers after trying to stop protestors from putting themselves in danger), Cassian’s chat with Maarva goes no better. She won’t go. The Aldhani heist has had an impact on her. More than just a strike against the Empire, it’s a rallying call for defiance, a marshaling point for courage. She refuses to leave her home and you see the cogs begin to move in Cassian’s mind, as he realizes the ripples of their raid have started to spread. He tells her he has to leave, but won’t be able to find peace worrying about her. In a beautiful moment, Maarva tells him “That’s love — the worry.” She implores him to stop searching for his long-missing sister. B2EMO, everyone’s favorite red rust bucket, is forlorn.

Returning to the ISB, not everyone is satisfied with the Empire’s predictably ruthless response. The underappreciated employee of the month Dedra Meero (Denise Gough) thinks it plays straight into the rebels’ hands. But she has even bigger things to worry about; namely, her workplace rival Lt. Supervisor Blevin (Ben Bailey Smith). He’s using this crisis meeting as an opportunity to attack Dedra for overstepping her jurisdiction. But it backfires and backfires spectacularly. In a move worthy of The Apprentice boardroom, she seizes the chance to lay out her theory. And she dares critique the Imperial response too: “Systems either change, or they die.”

It’s an incredibly satisfying moment and testament to Andor’s writing (and Gough’s performance) that we’ve been rooting for her to succeed, even when that means nothing but trouble for our heroes. She makes a convincing case and her ambition is lauded. Blevin is stripped of his jurisdiction and it’s handed to Dedra to manage. He couldn’t look more embarrassed if he’d just opened the door on Vader himself on the toilet, while Dedra looks like the Loth-cat who got the cream. This satisfaction is cut short, however. To rise through the Imperial ranks is to cut throats, and put your own on the line. Major Partagaz (Anton Lesser) offers her praise, and some ominous advice: “Watch your back”.

We cut with what can only be the Star Wars equivalent of Ibiza beach party music. The camera swoops over blue seas and onto sun-bleached sands. This is Niamos, a resort world, and some time appears to have passed. Cassian is now going by the name Keef, and is with a mystery woman in an apartment, hiding in the bathroom as he picks through a lockbox containing a blaster and credits.

Heading out onto the beachfront, he gets caught up in Shoretroopers chasing down thieves. Mistaken for one of them after understandably demonstrating some anxiety around the armed enforcers, we get an exciting Andor debut — the KX-series droids, the same model as his latter-day companion K-2S0 (Alan Tudyk). These droids demonstrate a similar intimidating strength, although with none of K2’s acerbic charm. After the trooper casually tells the droid “Hang onto this one for me”, it proceeds to hoist Cassian up by his throat against the wall.

Presumably, the trooper returns to intervene before he chokes, as the next thing we see is him in a sentencing facility. A bored bailiff is dishing out sentences on plates. Cassian is hit with multiple: civil disruption; anti-Imperial speech; fleeing the scene of anti-Imperial activity; attempted damage… the list goes on. And in his shock, insisting he is just a tourist, he almost gains another. The bailiff shakes her head, noting how this string would previously have warranted just six months. Instead, and potentially as a result of the escalation from the heist, it now carries a sentence of six years. He is grappled away to his fate.

Back in the Bureau Of Standards, Syril is at his workstation, staring at shifting data. The shot changes to show him seated, just one cog among many in the wider Imperial machine.

Moment of the Week:

Cinta, still on Aldhani, powers up a speeder bike as an Imperial Star Destroyer thrums into vision and fills the sky above her. It’s a terrifying moment to remind you of the sheer scale and might of the Imperial Navy, and how large a shadow it can cast.
What did you think of Andor Episode 7? Tell us in the comments below.
Andor (2022) is currently streaming on Disney+. Led by showrunner Tony Gilroy, it stars Diego Luna as Cassian Andor, Genevieve O’Reilly as Mon Mothma, Stellan Skarsgård as Luthen Rael, Fiona Shaw as Maarva Andor, Denise Gough as Dedra Meero and Kyle Soller as Syril Karn. Set before the events of Rogue One, in the years prior to Princess Leia’s fateful capture by Darth Vader, it follows the formation of the Rebel Alliance in the ever expanding Star Wars universe.

Comments Off on ‘Andor’ Episode 7: “The Announcement” Recap