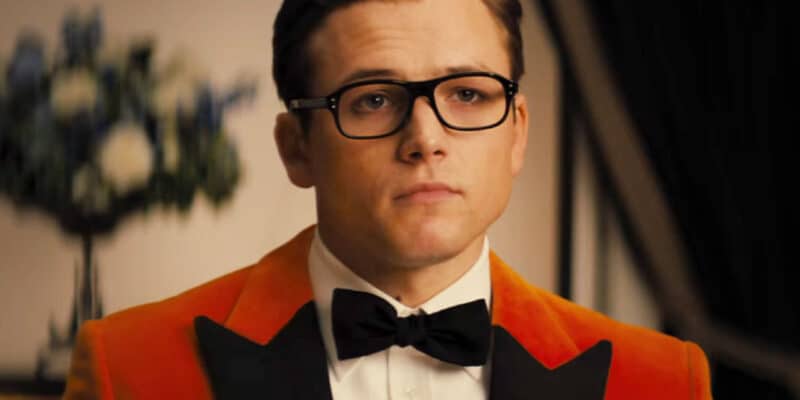 While rumors that Taron Egerton will be the new Wolverine/Logan in the Marvel Cinematic Universe continue to circulate, the 32-year-old British actor, best known for Kingsman: The Secret Service (2014), has now revealed that he almost played an iconic hero in another blockbuster franchise.

Taron Egerton is no stranger to action, having also starred in movies such as Kingsman: The Golden Circle (2017) and Robin Hood (2018), but we’re yet to see him appear in a major IP such as Marvel or Star Wars. However, Egerton actually came close to playing one of the faraway galaxy’s best-known characters.

In an interview with the Happy Sad Confused podcast, Egerton talked about how he was once in the running to play Han Solo in the Star Wars spin-off movie Solo: A Star Wars Story (2018), a role that was ultimately given to Alden Ehrenreich. In the interview, Egerton said:

“I’ll be honest, I got on the [Millennium] Falcon. I was with Chewie. I was in the full costume… and I… you know what, that’s what I felt like. I felt like I got there, I did it, I lived it.”

However, not only did Egerton briefly get to “play” the character, he ultimately chose to step away from the project. He added:

“There was another round that I decided not to do. And it’s far enough in the past now that I feel like I can say that. I hope no one feels annoyed that I have said it. But it just felt to me like I didn’t feel… like you know when we mentioned earlier that thing when I read the Kingsman script and I was like, ‘This is– I’ve gotta do this. This is my part.’ I just didn’t feel it.”

He also discussed the inevitable pressure of following an actor like Harrison Ford, saying:

“Yeah, and can really own it and really– ’cause you’re following Harrison Ford… No one ever wants to follow Harrison Ford, you know? So yeah, that didn’t happen.”

His comments echo a similar statement made by Chris Pratt, who recently revealed that he was too afraid to take on the role of Indiana Jones and replace Harrison Ford.

Solo: A Star Wars Story failed to wow audiences and critics, grossing only $393.2 million worldwide against a budget of $275 — $300 million. However, the film also underwent a troubled production, when original directors Phil Lord and Christopher Miller were fired and Ron Howard was brought in to complete the project.

Lucasfilm president Kathleen Kennedy recently came under fire for making a statement about how the company shouldn’t recast iconic Star Wars characters, referring, of course, to Solo: A Star Wars Story, which was criticized heavily at the time for the casting of Alden Ehrenreich as the iconic smuggler.

“I don’t mind saying that was a real thing, that was a real conversation. I’ve never said this, actually. To be honest, the reason that conversation never went anywhere further is because I didn’t want to play a character for a potential series of movies where you don’t see my eyes. For me, I felt, instinctively, creatively, that – like, the eyes are the windows to the soul. I would find that challenging, and I just didn’t find it an intriguing prospect. It’s not that they ever offered it to me, but there was a conversation – a real conversation – that never went any further.”

But Egerton may yet get another shot at playing an X-Men character, as it was recently reported that he’s in talks with Marvel bosses about playing Logan/Wolverine in the Marvel Cinematic Universe.

Whether or not he will end up donning the yellow spandex and putting on the adamantium-clad bone claws remains to be seen, but perhaps Egerton will show up in Star Wars in some other capacity one day. Or maybe he’s already Han Solo somewhere in the Star Wars Multiverse!

Do you think Taron Egerton would have made a better Han Solo than Alden Ehrenreich? Let us know in the comments down below!