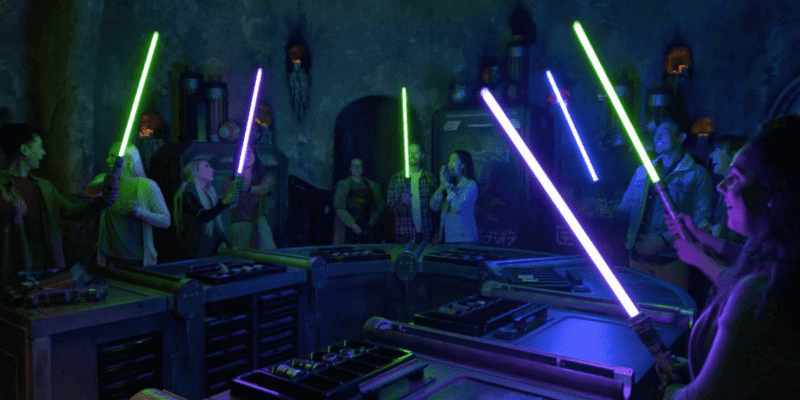 Disneyland Resort and Walt Disney World Resort are constantly changing, trying to improve Guests’ experiences at the Parks, and developing new and innovative technologies for the Park’s attractions and expansions. With the latest additions, Avengers Campus and Star Wars: Galaxy’s Edge, the experience when visiting the Parks has only gotten better for so many Guests.

However, many Guests consider Disney Parks lacking since their reopening, with bad experiences on cleanliness, food quality, merchandise stock, supply chain, and even Cast Members’ attitude.

Redditor u/letsthinkaboutthis_ recently shared their experience trying to build a  lightsaber at Savi’s Workshop at Disneyland, commenting they’ve wanted to do it for years.

They comment that Cast Members informed them that they did not have any more scrap for elemental nature, the theme this Guest originally wanted, and that they don’t think they will be receiving any more, causing them to choose protection and defense, an alternative they had previously considered. This Guest adds that they felt let down seeing the costly experience didn’t offer different parts to have a variety, as they were given extra pieces of the ones they already had instead of the other options included in the theme they had selected.

The original poster comments that, as they were exiting the experience, Cast Members commented that they wouldn’t allow them to change any parts, and when the Guest asked if they could change their saber entirely, they were told they couldn’t do that either. They warn any fellow Redditors and Guests wanting to build a lightsaber about their experience and advise them to wait until the new sabers come out, as current options are minimal and the Cast Members aren’t being helpful. They add that Guests should either save their money or buy a legacy saber at Dok-Ondar’s Den of Antiquities, mentioning they wish they had been informed a bit more thoroughly to make a different decision during their visit.

In a later comment, the original poster adds that when they tried to cancel their reservation due to the missing parts, Cast Members told them they would be charged either way since they wouldn’t be canceling their reservation at least one day in advance, as the cancelation policy for this experience states. They say this is “not very magical,” but it seems to be how Disney has been handling things lately.

There is a one-day cancellation policy. You must cancel at least one day prior to your reservation to avoid a per builder cancellation fee. If you fail to timely cancel and are a “no-show,” the credit card provided at the time of reservation will be charged the full product price, currently $219.99, per builder.

On an update, the original poster says they called Merchandise Services, who instructed them to return to Savi’s and explain the situation to a manager. They were kind and listened to the Guest’s story, saying they do not offer the missing parts to Guests, but would check to see if they had some scrap, which they did, but handled in a very “hushed” way in the original poster’s words. They were pulled aside and given the part they were looking for, and when they asked about “new scrap,” referring to the new pieces announced at this year’s Star Wars Celebration, the Cast Member laughed and said they had no idea when they would arrive.

Earlier this year, Guests experienced another massive flaw during this experience, as Disney Parks stopped providing complimentary cases and instead provided plastic bags while charging Guests full prices, creating outrage among Guests who, again, referred to the fact that this is a costly, premium experience, and that a fitting solution should’ve been provided for Guests.

We have also seen comments online commenting on Guests’ disappointment after being unable to find Holocrons at Dok Ondar’s. On a personal note, we have been looking for a Sith Holocron since September 2021, with no luck at Disneyland or Disney World. On a recent trip, we saw several items, including clothing, jewelry, phone accessories, and toys, were out of stock and, according to several Cast Members, have been for some time.

As of the publication of this article, Disney had not released any official statements addressing these supply shortages, which are continuously affecting Guests’ experiences while visiting the Park.

At Tomorrowland, fans of the Star Wars franchise can travel across the galaxy aboard Star Tours – The Adventures Continue and visit The Star Traders after their travels to find Star Wars-themed treasures and Disneyland merchandise. Guests can also join the Rebel Alliance on a dangerous and exciting mission aboard a Rebel X-wing on Hyperspace Mountain, a Star Wars overlay of the beloved Space Mountain attraction, running until July 4.

However, thanks to a recent announcement, this strict timeline will be modified for Guests to be able to meet Boba Fett (Temuera Morrison) and mercenary Fennec Shand (Ming-Na Wen), with Din Djarin (Pedro Pascal), known as the Mandalorian and Grogu coming to the Park at a later date. This opens a whole galaxy of possibilities, as Guests will be able to meet and interact with different characters from the ever-expanding Star Wars universe as they roam the Black Spire Outpost at Star Wars: Galaxy’s Edge!

Have you visited Star Wars: Galaxy’s Edge recently? What has your experience been like? Let us know in the comments below!