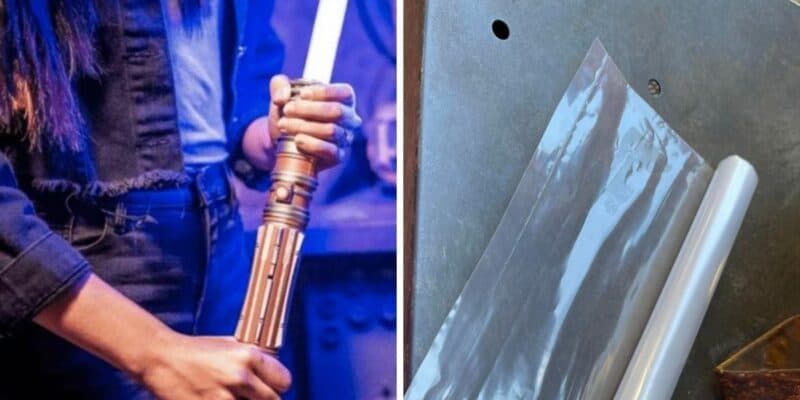 A Disney Guest traveled to a galaxy far, far, away this week in order to experience the Disney vacation of a lifetime. Booking a slot at the coveted Savi’s Workshop to build a lightsaber of her choice, Kate Harder was more than disappointed that Disney changed the carrying case for the lightsaber to a simple, clear plastic shopping bag instead of the carrying case billed by the website. Her story from Galaxy’s Edge shared personally with us, is as follows.

Kate arrived at Savi’s on Friday, January 7, 2022, around 11 a.m. for her 11:25 appointment. After checking her family in, the Cast Member handed her husband a plastic bag, which was unusual. After asking what it was for, her husband was told by a Cast Member that it was the carrying case for the handbuilt lightsaber.

Kate overheard this and asked the Cast Member who was currently taking her payment. They confirmed it was the carrying case. Of course, Kate inquired about the standard carrying case and was told they were sold out/out of inventory. Kate, of course, was angry about this and “said that a plastic bag wasn’t a case, and you know it.”

The Cast Member’s response was that if the Guest was unhappy, she could cancel the experience at no cost, but had to make the decision in this split second. That was difficult because Kate and her 9-year-old daughter had been planning this specific activity for months. Canceling would have been a worse choice.

Kate accepted the “junk plastic bag” thinking that Guest Services might provide her a discount for the other case. After the build, she went to one of the blue Guest Experience umbrellas and spoke with a Cast Member. That CM spent a deal of time on the phone, after which he apologized that nothing could be done. Her payment had been posted and the case she was given met the definition of a carrying case.

Kate and her family had already been carrying around the unwieldy lightsaber for 20-30 minutes, sliding around in the bag with no handles. It was a matter of time before it fell out.

She then asked for a discount on the Savi’s Workshop experience and was denied. Instead, she was sent back to Savi’s to get a shipping box to send it home. When she arrived, she complained again, she received no sympathy, only silence, and then paid $17.95 to have it shipped home.

While Disney will be responsible for damages occurring during shipping due to this process, Kate was still without her lightsaber for the rest of her vacation. She once again gave it another “college try” and visited Guest Services for a manager.

A Cast Member passed her onto another CM, who had already heard about her Facebook post going viral. He again gave her the same lines that she had already “paid for the experience and the case is just an “extra” and the plastic bag was sufficient to meet the description of the experience per their web page description.” The female manager that followed, again, gave her the same explanation.

Other Guests shared with Kate (as comments on her post) they had been given free kyber crystals as compensation, but when she asked for those, the manager refused to consider it and couldn’t offer her anything beyond the plastic bag, and they would not give her another case, even when the originals came back in stock.

Kate did not receive a discount on her experience, a future case, or anything else. She cautions other Disney Guests arriving at Savi’s Workshop that if they are comfortable carrying around a $240 lightsaber all day, to not let it keep you from having the experience. But know what you’re getting. If “Disney think[s] they don’t need to provide a case, I think we will see them remove that item from the description and no one will get a case.”

The Walt Disney World Website describes Savi’s experience as a way to, “Build your own custom lightsaber at this secret workshop and continue the way of the Force.” Mentioned in the description of the hand-built lightsaber workshop are pieces such as the hilt, handle, kyber crystal, and cloisonné pin. Currently, the website also promises that for the $219.99 price, you will also receive a carrying case.

These cases, in the early days of Star Wars: Galaxy’s Edge, the lightsaber carrying cases were beautiful customer black bags, with white logos hinting at the bag’s contents. The Walt Disney World Resort bag also had a large, adjustable strap, allowing the Jedi or Sith to carry it on their shoulder or crossbody style. Allowing Disney to simply change the lightsaber cases to a clear plastic shopping bag without much of a price change is inexcusable. There is no word on if Disneyland Resort Guests face the same change.

Have you had the same experience as Kate did? Would you still build the lightsaber, knowing you missed out on an incredible carrying case? Leave us a comment below.