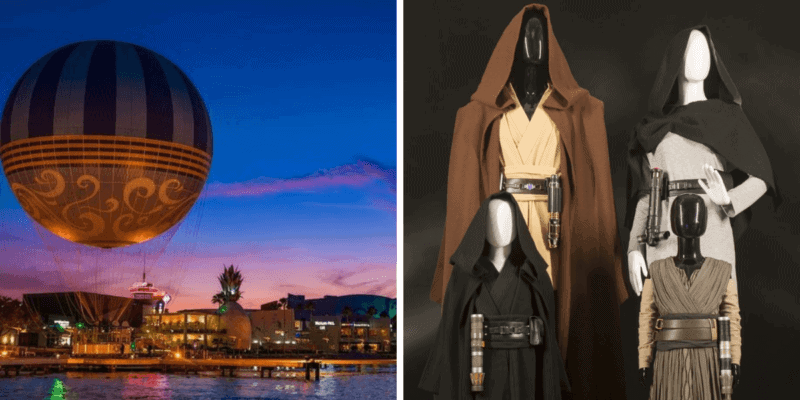 Products direct from Star Wars: Galaxy’s Edge will be shipped from the planet of Batuu and available at Star Wars Trading Post in Disney Springs at Walt Disney World Resort and Downtown Disney District at Disneyland Resort and online at shopDisney.com for a limited time!

On shopDisney.com, fans can outfit themselves for a galactic adventure at home with garments and gear direct from Black Spire Outfitters, including offerings iconic to both the Jedi as well as the Sith. Fans can complete their looks with mysterious and unique artifacts including legacy lightsabers from Dok-Ondar’s Den of Antiquities beginning on Sept. 28 at 7 a.m. PST.

Fans will also want to stay tuned to shopDisney.com over the next few months for even more products shipping from the planet of Batuu with handcrafted toys and collectibles from Toydarian Toymaker, curious creatures from Bina’s Creature Stall, recruitment gear and supplies from First Order Cargo and even the galaxy’s most indispensable sidekicks from the one and only Droid Depot.

Vote for the next Legacy Lightsaber!

In celebration of this announcement, I’m excited to announce that, beginning today fans can vote for which legacy lightsaber they would hope to see offered at Dok-Ondar’s Den of Antiquities. That’s right, Dok is always looking to expand his offerings and this is your chance to tell us what you hope his next acquistion might be!

Legacy lightsabers are modeled after the lightsabers of some of the most heroic, iconic, mythical and sinister figures in the Star Wars galaxy. This list includes legends from Luke Skywalker and Ahsoka Tano to Darth Vader and Darth Maul.

Found inside Dok Ondar’s Den of Antiquities, twelve unique legacy lightsabers have been offered to date. Today, you have a chance to share your opinion about what you hope to see added to Dok’s collection! Make your choice from these 6 options, all legendary in their own right — Anakin Skywalker, Kanan Jarrus, Qui-Gon Jinn, Cal Kestis, Ezra Bridger and Lord Corvax.

The current times make it extremely difficult for Star Wars fans to get a Disney Park Pass to Disney’s Hollywood Studios and make it out to Black Spire Outpost to find the desired merchandise.

Are you excited about these new opportunities to score some Star Wars merchandise on Disney Property? Let us know in the comments!