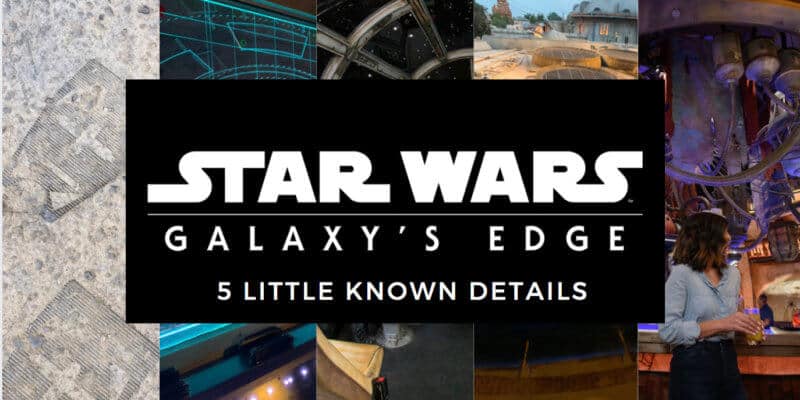 If you’ve had the good fortune to journey to the planet of Batuu (AKA Star Wars: Galaxy’s Edge) at Walt Disney World or Disneyland Resort, there’s no doubt you’ve noticed all of the big-picture features Disney’s Imagineers included to truly transport Guests to another world.

There’s the 100-foot long Millennium Falcon replica (you can almost imagine Han Solo walking around outside of it), and the incredibly realistic open-air Black Spire Outpost marketplace. True to form, though, the Disney’s Imagineering team left nothing to chance and made sure that even the smallest details at Galaxy’s Edge were attended to.

#DidYouKnow: The heat source for the meat grill at Ronto Roasters is a podracing engine hanging from the ceiling? pic.twitter.com/RCCxKVnnGe

The Disneyland AP Twitter account recently shared a little-known fact about Ronto Roasters, home of the Ronto Wrap. DLR’s social media team shared, “The heat source for the meat grill at Ronto Roasters is a podracing engine hanging from the ceiling.”

This Star Wars land fun fact got us thinking about all of the other little known Galaxy’s Edge details that go under-appreciated by most Disney theme park visitors. Here, you’ll discover five details (including the Ronto Roaster podracing engine!) that you’ve never noticed at Star Wars: Galaxy’s Edge.

The red flags of the First Order’s 709th Legion (the Red Fury) can be seen hanging in various locations around Batuu, including near this imposing TIE Starfighter, which is impressive in its own right.

The appearance of the Red Fury’s flags is a nod to Batuu’s rich backstory, which should fascinate every Star Wars fan. The 709th storm trooper legion was handpicked by Supreme Leader Kylo Ren and these highly-trained, deadly soldiers occupied Batuu while war raged between the First Order and the Resistance.

The third under-appreciate Galaxy’s Edge detail on our list are the droid tracks that appear on the pavement throughout the theme park. These “footprints” were created by an R2-D2 unit (circa 1977), which is a great piece of Star Wars history for fans of the original trilogy!

Next time you visit the Star Wars park land at either Disney’s Hollywood Studios or Disneyland park, don’t forget to look down. If you follow the droid tracks near the Droid Depot, you’ll even find a fun animatronic scene in which a red R5 unit and a yellow R2 unit are getting an oil bath.

Also, keep your eyes peeled for the roaming R2-D2 at Galaxy’s Edge!

Rise of the Resistance Queue

We also think the details in the Rise of the Resistance queue are easy to overlook. From this incredibly detailed star map to the fact that many parts of the line were hand-carved for the sake of authenticity, the Imagineering crew who worked on Galaxy’s Edge really put themselves in the shoes of Batuu’s Resistance faction.

Kirstin Makela of Walt Disney Imagineering said, “My job as an art director is to think about how the people who inhabited these spaces would actually build these spaces.” Next time you’re lucky enough to be part of a Rise of the Resistance boarding group, don’t take the queue for granted.

Our final under-appreciated “detail” at Star Wars: Galaxy’s Edge are the Cast Members themselves! The Cast who works at Batuu every day has undergone special training to make sure they provide Disney Parks Guests with the most immersive experience they possibly can.

They’ve learned a new Batuuan language (“Bright suns, traveler!”) and go above and beyond to make sure every Galaxy’s Edge visitor feels like they’ve truly traveled to a galaxy far, far away.

Trek to Batuu Yourself!

To see these and the hundreds of other details that make Star Wars: Galaxy’s Edge a truly out-of-this-world experience, contact the Authorized Disney Vacation Planners at Academy Travel for a free quote. Their team can help you plan the trip of a lifetime to either Walt Disney World Resort in Florida or Disneyland Resort in California.

Whether you want a reservation at Oga’s Cantina or you’re hoping for a Millennium Falcon: Smuggler’s Run FastPass, their Disney park experts will make sure every detail is taken care of.