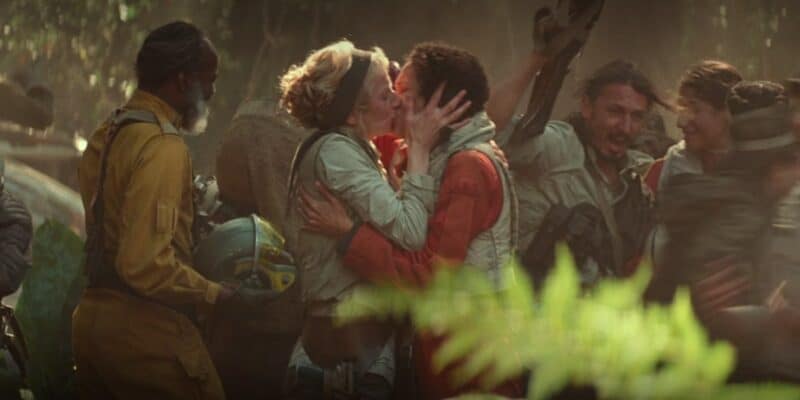 Star Wars: Episode IX — The Rise of Skywalker (2019) was an overall miss with fans. After touting the return of Emperor Palpatine (Ian McDiarmid) in the official trailer run-up to the sequel trilogy movie’s release, the film fell flat with the majority, and blame was laid at the feet of directors JJ Abrams and Rian Johnson, and Lucasfilm President Kathleen Kennedy for the overall muddled output of the Star Wars franchise

Nestled within the things that went wrong with the Star Wars movie, a smaller moment noticeably drew ire from audiences: the same-sex kiss featured in the film’s final act. Now, Star Wars are fixing this sweeping LGBTQ+ moment — a moment was meant to mark something momentous in the franchise — with an all-new LGBTQ+ romance for the galaxy, far, far away.

That said, Abrams’ return to the galaxy, far, far away did not do much to mend the fractured fandom and instead seemed to deepen the crevice left behind by Johnson. After Colin Trevorrow (Jurassic World) was fired by Lucasfilm, the reins of helming the third movie shifted back to the sequel trilogy’s inaugural director but Abrams has since discussed the effects of not pre-planning the overarching Star Wars story. It wouldn’t be until Jon Favreau and Dave Filoni’s The Mandalorian gained speed that hope for the Star Wars franchise would be loosely restored.

Aside from Johnson having Kylo Ren kill Supreme Leader Snoke (Andy Serkis ) in The Last Jedi, which ultimately left the door open for Emperor Sheev Palpatine’s return, Finn’s (John Boyega) incredibly downsized role, and Rey discovering herself to be a granddaughter of the Sith, the sequel trilogy had one other moment that irked many fans: the lesbian kiss in the final moments of The Rise of Skywalker.

After the Resistance finally bested the First Order and Palpatine’s fleet of Star Destroyers above the planet Exegol, the characters of the galaxy far, far away rejoiced in a way not dissimilar to the celebration had on Endor in Star Wars: Episode VI — Return of the Jedi (1983). Amid the hugs and cheers, Abrams included a sweeping lesbian kiss, marking the first moment LGBTQ+ characters had been seen on-screen in the Star Wars universe. But, it was just that, sweeping, gone in the flash of a few seconds.

It wasn’t just the timing of the moment that was wrong but the characters involved. When Commander Larma D’Acy (Amanda Lawrence) kisses her pilot wife Wrobie Tyce (Vinette Robinson), it proved that Star Wars was not willing the put an LGBTQ+ moment front and center; in using two small, side characters to highlight this historic moment, Disney and Lucasfilm seemed to choose optics over substance. This came after many fans had been clamoring for the notable chemistry between Finn and Poe Dameron (Oscar Isaac) to expand into something more than friendship.

Alas, it has been two years since The Rise of Skywalker‘s debut and as of yet, no other LGBTQ+ characters or relationships have appeared in live-action. But, other Star Wars media has. In the Star Wars: The High Republic transmedia initiative, a Jedi romance is seemingly erasing the mishandling of Star Wars‘ sweeping onscreen LGBTQ+ moment. One High Republic Era author, Daniel José Older, has brought an LGBTQ+ couple to the center of the Star Wars story.

Back in January, “Star Wars: The High Republic Adventures” confirmed the romance between Jedi Padawan Lula Talisola and Force-sensitive Zeen Mrala, with the franchise aiming to show the opposite of Anakin Skywalker’s (Hayden Christensen) downfall after his attachment to Padmé Amidala (Natalie Portman). What Talisola and Mrala’s coupling also showcases is the ability to nurture an LGBTQ+ romance through careful and considered character-building, meaning the connection between the two feels organic and not a throwaway nod like in The Rise of Skywalker.

Fans deserve to see themselves in media, and blockbuster franchises like Star Wars and Marvel Studio’s Marvel Cinematic Universe should be leading the way. Unfortunately, both are remiss of any notable LGBTQ+ characters. However, the MCU recently debuted the first gay character in the form of Brian Tyree Henry’s Phastos in Chloé Zhao’s Eternals (2021) with Kevin Feige confirming that Valkyrie (Tessa Thompson) will be featured as bisexual in Taika Waitit’s Thor: Love and Thunder (2022).

There is seemingly a long way to go when it comes to three-dimensional LGBTQ+ love in big blockbuster pictures.

What do you think of Star Wars trying to rectify its LGBTQ+ mishap? Let us know in the comments down below!