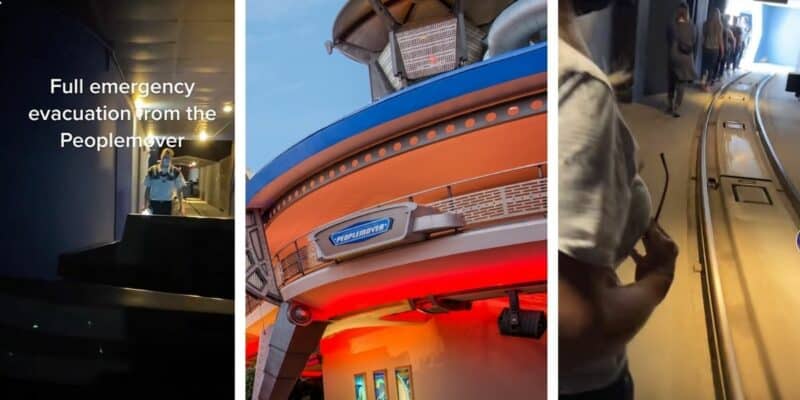 Despite its humble appearance and gentle movement, the Tomorrowland Transit Authority PeopleMover cannot seem to catch a break.

The fan-favorite attraction at Walt Disney World Resort’s Tomorrowland was once again shut down and fully evacuated following a medical emergency on board.

The Tomorrowland Transit Authority PeopleMover was one of the last attractions to reopen at the Walt Disney World Resort in Orlando, Central Florida due to refurbishment and following the closures affected by the ongoing pandemic. The fan-favorite attraction takes to the skies above Magic Kingdom’s Tomorrowland giving Guests the chance to have a time-out from the hustle and bustle of the Disney theme park, giving unparalleled views of other attractions like Cinderella Castle, Tomorrowland Speedway, and the construction of the upcoming TRON roller coaster.

The “mass transit system of the future” recently got into trouble when the Disney Resort shut down the attraction along with fellow Tomorrowland fan-favorite, Space Mountain. The double closure was due to a reported fire but later, sources confirmed that the Fire Department had cleared the area and that no fire was detected. In a new incident captured on social media, the PeopleMover was evacuated with the Guest citing a medical emergency that caused the shutdown.

Posting to TikTok, Expedition Neverland (@expedition_neverland) captured the moment that the PeopleMover was ordered to evacuate at Magic Kingdom Park.

The video shows the PeopleMover at a standstill while Cast Members approach with torches to safely remove the Guests from the ride vehicle. From the comments, we can ascertain that a medical emergency caused the evacuation, leading to the fire department being called. The video creator went on to add:

It was very strange. It kept stopping and starting then we were evacuated. I heard the cast member say they called medical services!

This is just the latest in a long line of evacuations on Tomorrowland’s PeopleMover. The 10-minute-long journey around the Disney Park land came to an abrupt end last year leaving Guests able to ride Space Mountain with the lights on!

Despite being one of the most magical destinations in the world, Disney Parks, unfortunately, are not immune to real-life problems including medical emergencies. Recently, the latest Walt Disney World injury report was released and detailed many medical incidents while on Park property at Magic Kingdom, EPCOT, Disney’s Hollywood Studios, and Disney’s Animal Kingdom. In addition, a lawsuit is currently ongoing relating to an accident outside House of Blues at Disney Springs.

Walt Disney World is currently amid its 50th anniversary celebrations AKA The World’s Most Magical Celebration. The 18-month-long event has seen many new additions make their debut across the Florida Resort including the Disney Enchantment fireworks, Harmonious at World Showcase, Disney KiteTails, and more controversially, the launch of FastPass+ replacement, Disney Genie+, and the a la carte Individual Lightning Lane Selections. Disney World will next open Guardians of the Galaxy: Cosmic Rewind in EPCOT’s new Wonders of Xandar pavilion in the World Discovery neighborhood.

Have you ever been evacuated off of the PeopleMover? Let us know in the comments down below!