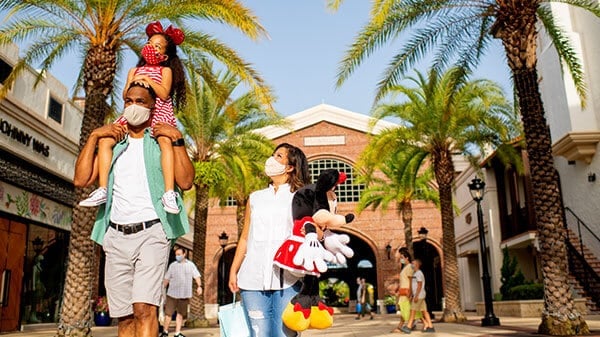 The place of magic and memories, and home to Cinderella Castle, Walt Disney World Resort is a beacon of joy. However, despite the experiences to be had at Disney Parks — whether it’s riding Space Mountain at Magic Kingdom Park, witnessing the Harmonious fireworks at EPCOT, entering the Star Wars galaxy at Disney’s Hollywood Studios, or soaring over Pandora in Disney’s Animal Kingdom, there are occasions where incidents, accidents, ride malfunctions, and injuries can disrupt Guests’ vacations or Disney magical moments.

As was the case at the end of 2019, when one Guest fell over and injured themselves outside a popular Disney Springs location. And the case is still ongoing over a year later.

Disney Springs, the retail and dining area that sits within Walt Disney World property, is a beloved destination to pick up all your merchandise and take time out from the bustle of the Parks.

One trip to Disney Springs, and specifically the House of Blues Restaurant and Bar, ended with one Disney Springs Guest suing The Walt Disney Company for the sum of more than $30,000. In public records obtained from the Orange County Clerk of Courts, the incident occurred on November 24, 2019, and as of January 21, 2022, documents in the case are still being filed.

The events which led to this “action of damages which exceeds the sum of THIRTY THOUSAND ($30,000.00) DOLLARS” to be filed saw the Plaintiff “[trip and fall] on a brick paver outside of the restaurant at or near the entrance/exit to HOUSE OF BLUES, in an area that was owned, operated or maintained by Defendant HOUSE OF BLUES.”

The Plaintiff and their lawyer set out the following negligent behavior of the Defendant, House of Blues at the Orlando Disney Resort. The report, which was filed on 10 November 2021, states:

a. failing to maintain the premises in a reasonably safe condition including walkways
leading in and out of HOUSE OF BLUES;
b. failing to utilize non-skid paint and/or materials on the surface of the walkways to prevent from tripping:
c. failing to warn patrons of the treacherous walkway when Defendant had or should have superior knowledge than that of the Plaintiff;
d. failing to provide and/or create adequate safety measures on the premises, including placement of warning signs; rubber floor/walkway mats; and other products;
e. failing to establish and/or enforce adequate inspection and supervision of the premises, including the common area and walkways contained therein;
f. failing to maintain adequate lighting in the area in which Plaintiff fell;
g. failing to exercise due care relating to the ingress and egress of patrons of the House of Blues.

The complaint goes on to detail why the Guest is suing House of Blues and by association, The Walt Disney Company’s Disney Parks, Experiences, and Products division (listed in the court documents as Walt Disney Parks and Resorts). Of the Plaintiff’s reason to sue, the report states:

As a direct and proximate result of the foregoing negligence, Plaintiff suffered bodily injury and resulting pain and suffering, impairment, disability, inconvenience, disfigurement, mental anguish, loss of capacity for the enjoyment of life, expense of hospitalization, and medical and nursing care and treatment. The injury to the Plaintiff is permanent within a reasonable degree of medical probability and the Plaintiff will continue to suffer the losses in the future.

The complaint concludes with a request for a Jury trial.

During the time since the complaint was filed to the present, January 2022, Affidavits and multiple Request to Produce documents have been filed. The latest court documents, a Request to Produce dated 21 January 2022, highlights the Plaintiff’s request for Walt Disney Park and Resorts to release specific evidence in relation to the incident. From this document, it can be ascertained that on November 25, 2019, one day after the fall, a Disney representative did take a statement from the Plaintiff, to which it is claimed they produced in evidence.

Other requests saw the Plaintiff request video footage of the incident, the names of Cast Members working at House of Blues at the time of the incident as well as of those who had worked there for the 12 months following. To the majority of requests, where Disney had not already provided documents for the litigation, their response remained that the Plaintiff’s request was:

“…overly broad, vague, not reasonably limited in time or scope, not reasonably calculated to lead to the discovery of admissible evidence, and to the extent it seeks production of documents or materials gathered or prepared in anticipation of claims or litigation, which are protected from discovery by the work product doctrine and/or attorney/client privilege.”

The latest filing shows that Disney has responded to the Plaintiff’s requests as well as providing a log of evidence previously supplied by the Defendant. The lawsuit is still ongoing.