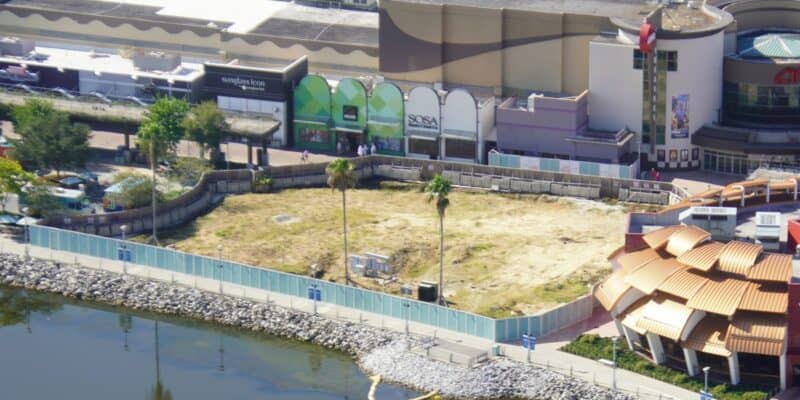 At Disney Springs, Guests typically visit the area to eat some delicious food, seek out some shopping, and enjoy the atmosphere that Disney has so intricately created.

There will always be something being built or refurbished in the area from time to time, as we can see all over Disney property. Lately, Guests at Disney Springs may have realized that some areas have been under construction for quite some time; however, at the moment, no construction is being done.

With the pandemic came a few setbacks for Walt Disney World. Projects were pushed back, offerings were removed, and some locations that Disney was preparing to introduce to their Guests were not only put on the back burner but were canceled altogether. The Disney Springs eatery Bongos was demolished so that Beatrix, a new restaurant and coffee bar, could go in its place.

Beatrix was one of two canceled projects at Disney Springs. The other was Ample Hills Creamery, the ice cream location that was removed from Disney’s BoardWalk but was supposed to open at this new Disney Springs location in winter 2020.

So what is going on with these large plots of land now? Nothing, apparently.

Theme park reporter bioreconstruct (@bioreconstruct) showcased what the two areas look like at this moment, and it seems that they remain empty without and construction equipment or workers in the area.

The large plot of land would have belonged to Beatrix, and Ample Hills Creamery would have been across the walkway. We currently have no update as to what will be taking the place of these now desolate locations.

We have also recently learned of the third plot of land that will need to find a new resident. Disney announced that the NBA Experience was coming to an end after a very short run. The NBA Experience took over DisneyQuest, and now it seems that Disney will be back at the drawing board to see what offerings they can put in its place.

What would you like to see added to Disney Springs? Let us know in the comments below.