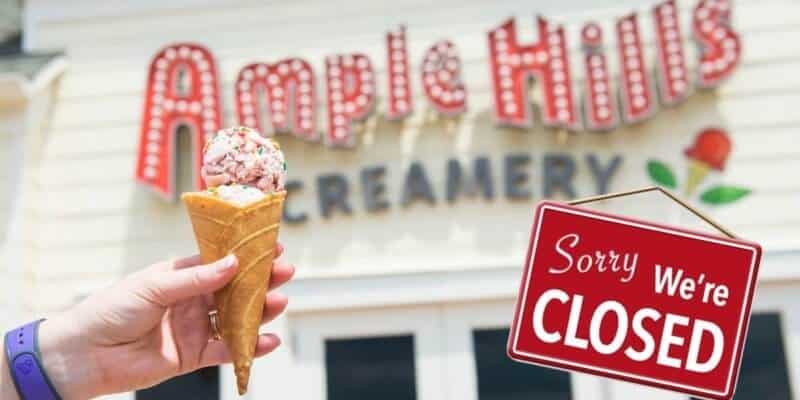 We’re sad to announce that it looks like the Ample Hills Creamery has seen its last days at Walt Disney World. The popular location at Disney’s Boardwalk Resort looks to be closing and the previously announced Disney Springs location is looking like it will never see the light of day.

The popular destination served delicious flavors including dark chocolate, orange marshmallow, chocolate, lemon sky, and pure strawberry ice cream and had the perfect sweet treat for any visitor on a warm Florida day.

We thought that something might happen to the locations at Walt Disney World as the creamery had come up against Chapter 11 bankruptcy earlier in the year and then just a few days later the location at Disney’s Boardwalk Resort closed alongside the rest of Walt Disney World to try and tackle the global pandemic.

Related: Disney’s BoardWalk: A Guide to Dining at the BoardWalk

There was a glimmer of hope when it was announced earlier this month that Schmitt Industries had closed the acquisition of Ample Hills Creamery assets but it would appear that for now there is no future at the Walt Disney World Resort.

Here is a quote directly from an Ample Hills Creamery spokesperson:

Prior to the acquisition, the Disney agreement with Ample Hills creamery ended (back in January). As a result, Ample Hills will close at Disney’s BoardWalk and the proposed Ample Hills location at Disney Springs will not open later this year.

There have been many occasions where we’ve enjoyed something sweet from the Ample Hills Creamery while watching the world go round and relaxing at Disney’s Boardwalk Resort. It’s a real shame to lose the business and that incredible Sally Sells Seashells flavor that was unique to Walt Disney World!

Even though there are other options just around the corner with the excellent Beaches & Cream Soda Shop located at Disney’s Beach Club Resort, we will really miss Ample Hills.

The good news is that they are still offering nationwide delivery of ice-cream so there is still a way to get access to your favorite flavor!

If you’re looking to book your next trip to Walt Disney World then be sure to check out our friends at Academy Travel. No matter what your Disney Parks needs. the team will be able to help you to book your next magical vacation. Contact their team now for a free quote!

Will you miss the Ample Hills Creamery at Walt Disney World? Let us know in the comments below.