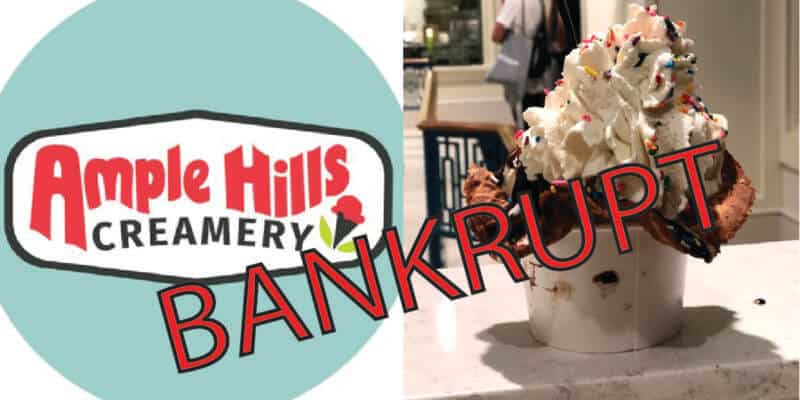 The famous ice cream chain Ample Hills Creamery, with multiple locations on Disney property, has filed for Chapter 11 bankruptcy, according to The Real Deal. This development is reported not to be connected to Coronavirus effects, but rather issues with its Red Hook factory.

The chain, with 14 locations spanning New York, New Jersey, and Florida, is now preparing to move forward. In regards to the bankruptcy, the company stated,

“This is a strategic decision that allows us to course correct and continue doing what we love most: creating a delicious product from scratch, in our beloved Brooklyn home,”

Earlier this year, Ample Hills had announced the closing of its Los Angeles location, stating that they, “Look forward to existing and new expansion opportunities in the Southern California market and promise to stay in touch!”

. Opened in 2016, Ample Hills at Boardwalk Inn has been serving guests scoops and ice cream sandwiches of all different flavors. Stand out flavors include Ooey Gooey Butter Cake, Chocolate Milk ‘n Cookies, and Peppermint Pattie. A new location was also opened this Winter at Disney Springs West Side.

My favorite ice cream from our good friends at @amplehills in collaboration with @MarvelStudios!
Check out the new flavors!!! pic.twitter.com/GlrVgVpczD

We hope that in the future, Ample Hills moves past this bump in the road and we get to continue to appreciate these delicious flavors in the future!

How do you feel about Ample Hills Creamery announcing bankruptcy? Have you had their ice cream in the past? Let us know in the comments.

Comments Off on Ample Hills Creamery Filed for Bankruptcy