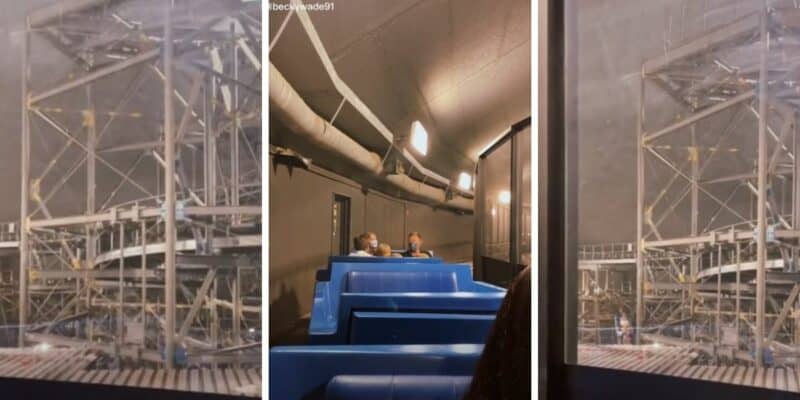 The Tomorrowland Transit Authority PeopleMover is a popular attraction at Magic Kingdom in Walt Disney World. In case you aren’t familiar, the ride takes Guests on the grand circle tour of Tomorrowland, allowing them to see the different attractions located inside the land — Including Space Mountain, Carousel of Progress, and Buzz Lightyear’s Space Ranger Spin — as well as getting the chance to people watch from the highway in the sky.

Well, on a recent visit, Guests were in for an “unexpected detour” as the PeopleMover ended up experiencing technical difficulties, resulting in an evacuation.

Becky shared the following video to TikTok, which shows Guests stuck on the PeopleMover while inside Space Mountain. The lights came on for safety reasons, but that didn’t stop Space Mountain from operating. The video pans to the right and you can clearly see Guests riding Space Mountain with the lights on.

Riding Space Mountain with the lights on is a dream for many Guests as this is a rare occurrence.

In part two of the video, Becky shared Guests being evacuated off of the Tomorrowland Transit Authority PeopleMover.

Reply to @hanxd10 update and surprise at the end!

At this time, we do not know what caused the Tomorrowland Transit Authority PeopleMover to break down.

Have you ever ridden Space Mountain with the lights on? Let us know in the comments below.