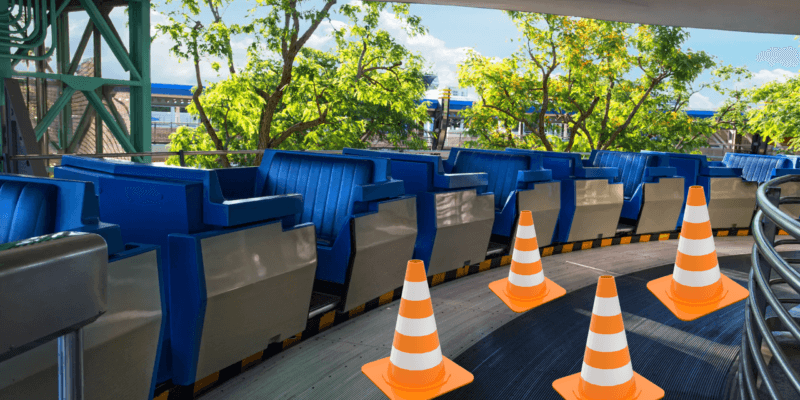 The Tomorrowland Transit Authority PeopleMover or simply “PeopleMover” for many Disney fans around the world is one of the most beloved attractions at any Disney Park.

In fact, a member of our team Kelly recently wrote a great piece on why the PeopleMover is one of the best attractions at Walt Disney World, an opinion that I agree with!

Given that so many fans love the PeopleMover, I thought I would pose the question, isn’t it about time that Disney gave it the attention it deserves? Here are a few of my suggestions on how Disney could give PeopleMover some love to show the fans they appreciate it as much as we do.

Give it a proper queue

The PeopleMover has grown in popularity over the years (especially since the rise of social media) and even during the classic quiet months there is always just a collection of people bunched together waiting to board the moving walkway to the boarding station of the attraction.

Disney needs to take this attraction a bit more seriously at the Magic Kingdom and introduce a proper queue area for the ride. During busy times this area turns into a bit of a free for all, and this could all be changed with the introduction of an area to queue. Now I know the logistics of this and the current space available makes this difficult, but remember, I’m not an Imagineer, it’s not my problem to solve!

With the current situation and the increase in social distancing methods that are likely going to have to be introduced for attraction queues, who knows what this will mean for the PeopleMover. It’s likely the current structure will have to change, unless the attraction remains temporarily closed. Which leads nicely onto my next point…

Everyone knows about the famous orange cones that sit on the PeopleMover right? Any vehicle that Cast Members deem unsuitable for guests holds an orange cone to let Cast Members and guests know not to sit there.

What other attraction can you think of where this would be acceptable to see almost every time you ride? Disney needs to work at making any quick adjustments to the attraction so that at the very least we can wave goodbye to the cones (but hopefully not the Twitter account).

Give the attraction a full refurbishment

As for what I’d like to see included in a full refurbishment? A full track and ride vehicle replacement, a brand-new audio track, and perhaps an extension of the attraction so that it passes a little closer to the upcoming TRON attraction.

Are we likely to see any changes?

With construction at Walt Disney World currently paused it’s very unlikely we are going to see any big changes to the attraction in the near future. That being said, when TRON does eventually open we are likely to see at least a bit of new audio added to reflect the new addition to Tomorrowland.

Anything new to one of the most beloved attractions at the Magic Kingdom is always going to be a win in my book.

Do you think Disney needs to give the PeopleMover more attention? Let us know in the comments below!