Couple Gets "Frisky" On Disney's PeopleMover, Forces Ride to Stop - Inside the Magic 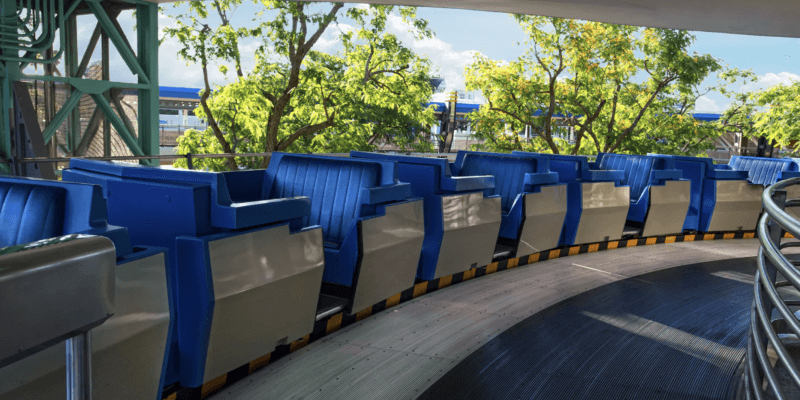 The Tomorrowland Transit Authority PeopleMover is a popular attraction at Magic Kingdom in Walt Disney World. In case you aren’t familiar, the ride takes Guests on the grand circle tour of Tomorrowland, allowing them to see the different attractions located inside the land — Including Space Mountain, Carousel of Progress, and Buzz Lightyear’s Space Ranger Spin — as well as getting the chance to people watch from the highway in the sky.

If you’ve ever been on the Tomorrowland Transit Authority PeopleMover, you know that while riding through Space Mountain, the lights are out as you ride past the indoor rollercoaster, which is set in the dark. Well, one Disney World Guest explained that the ride came to a sudden stop as a couple, who was in two cars ahead of them, decided to “get frisky” as they assumed no one could see them.

“We got stopped on the PeopleMover cause the couple two cars in front of us got frisky in Space Mountain,” the Disney World Guest wrote. “It stopped, the lights came on, and the announcement was ‘we can see you’.”

If you were not aware, the Disney Parks have cameras located throughout to ensure a safe, family-friendly environment for all Guests.

In fact, many Walt Disney World attractions have cameras located inside of them so that Cast Members can keep an eye on Guests and ensure they are following the rules. For example, one time a Cast Member came over the loud speaker on Carousel of Progress to tell the Guests to keep their face coverings on during the entire show. Cast Members were able to see Guests remove their face coverings thanks to hidden security cameras placed throughout the rotating theater.

And, of course, the Tomorrowland Transit Authority PeopleMover has security cameras throughout the ride track so that Cast Members can make sure Guests remain seated with their hands, arms, feet, and legs inside the vehicles at all times (or to ensure no couple is getting “frisky” during the Space Mountain section.)

Another Disney fan replied back, “I can only imagine what the faces of the people messing around were lmao,” to which the Guest said, “It got them to stop, that’s for sure. I cringed when we got off the ride, and I saw him zip up his fly. Lol.”

Please note that behavior like this is strictly prohibited at the Disney Parks as it is a public place and a family-oriented location. Disney Cast Members and security officials are always at the theme parks in order to maintain a safe environment as much as possible.

If you ever witness anything of this nature, or if you are ever concerned when visiting one of the Disney Parks, be sure to find the nearest Cast Member or report your issue with Guest Relations, located in each of the Disney Parks.

Is the Tomorrowland Transit Authority PeopleMover a must-do for you and you family? Let us know in the comments below.