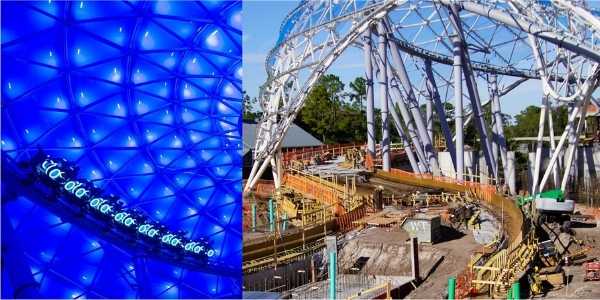 The highly-anticipated Magic Kingdom coaster construction has been creeping along. The semi-enclosed launched steel motorbike roller coaster first arrived in 2016 as Tron Lightcycle Power Run in Shanghai Disneyland. The attraction was an instant success, so we were thrilled to learn another Tron coaster (known as TRON Lightcycle / Run) would be making its way to Walt Disney World Resort. New images show construction progress is being made, with photos that hint towards the attraction marquee and access path over the train tunnel.

Back in 2017, Disney announced at the D23 Expo that the Tron franchise would be coming to Magic Kingdom Park in roller coaster form. We learned the attraction would reside in the Tomorrowland portion of the Park. The Walt Disney World Railroad was then closed in December 2018 so construction on the coaster could begin as its location would take over the train tracks. Now, as refurbishment is underway for the Walt Disney World Railroad and TRON construction continues, we’re seeing some insight into the train tunnel and walking path that will likely go over the tunnel.

@bioreconstruct took to Twitter to share a few photo updates on the coaster’s progress from Thanksgiving weekend (November 27). Here’s a look at the current canopy work in progress at TRON with Space Mountain in the distance.

Here’s the curved roof extension recently built over where the TRON coaster ride vehicle will enter the top of the show building after being launched on its thrilling race.

The building located next to TRON looks like construction is moving along with exterior boards going into place as shown in the photo below.

When the Walt Disney World Railroad reopens, it will tunnel through the attraction. Here’s a photo of the concrete being formed for the curved walkway, so Guests will be able to cross over the steam train tunnel and access the TRON attraction.

Here’s an interesting piece of construction! @bioreconstruct believes this semicircular frame placed at TRON’s construction site is likely for the attraction marquee.

It is also believed that the concrete formed here at the center might be for TRON signage which is in the center of the access walkway for the attraction.

Of course, the BIG question is when will the new attraction open? When Disney first announced TRON coming to Magic Kingdom, they had high hopes the attraction would be ready in time for Walt Disney World’s 50th Anniversary. With COVID closures causing construction delays, the opening time frame for the coaster has been pushed back. While Disney has yet to confirm an official opening date, we can expect to experience this attraction sometime in 2022.

Impatiently waiting for this Disney roller coaster? Here’s a full ride-through of Tron Lightcycle Power Run at Shanghai Disneyland so you’ll have an idea of what to expect from the Magic Kingdom version:

Are you excited to welcome TRON to Walt Disney World? Let us know in the comments!