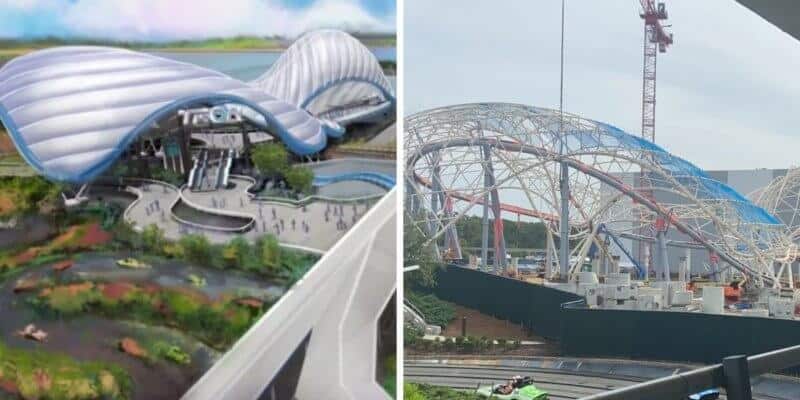 Disney World fans cannot wait for the day they can take off on TRON Lightcyle / Run. As Disney Imagineers continue to work on the upcoming Tomorrowland attraction, we have spotted a new element been added to the canopy.

On a recent trip to Magic Kingdom, I hopped onto the Tomorrowland Transit Authority PeopleMover and as I passed by the construction at TRON Lightcycle / Run, I spotted new blue netting added to the canopy of the highly anticipated coaster.

Check it out in the photos below!

The installation of the blue netting, which you can see clearly in the images above, will not be how it will look once it is complete. This milestone is just the first step in installing the entire canopy, which will be illuminated at nighttime as seen in the concept art below.

I also decided to walk over to Storybook Circus to check out the construction from that side of the site and it is clear that the attraction is inching closer to completion as the construction crew can be seen along with construction vehicles around the building.

You can also see the bright blue netting on the canopy from this angle! In the image below, if you look in the background near Space Mountain, the blue netting is clearly visible.

At this time, we do not have an opening date for TRON Lightcycle / Run, but Inside the Magic will update you as we get information.