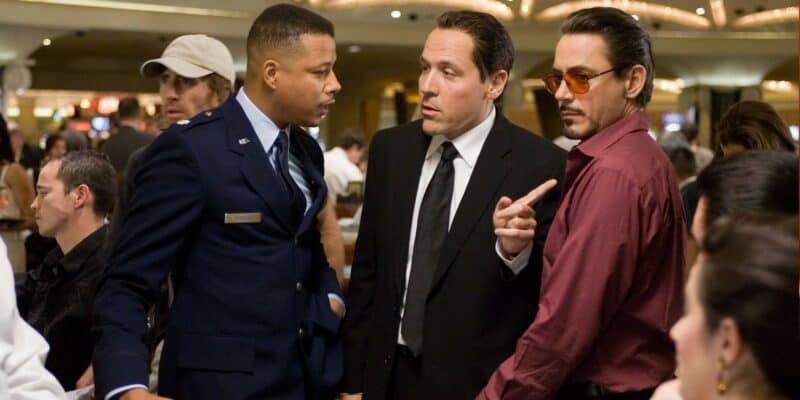 Marvel Studios President Kevin Feige has made a lot of movie magic since he launched the Marvel Cinematic Universe with Iron Man (2008).

Although RDJ has confirmed that his time in the MCU came to a close with the beloved character’s ultimate sacrifice — in the arms of his wife, Pepper Potts (Gwyneth Paltrow) — to save the world from Thanos (Josh Brolin) in Avengers: Endgame (2019), other Iron Man trilogy characters are still appearing in new Marvel movies.

But, as it turns out, Hogan was actually supposed to meet his demise in Iron Man 3 (2013) — which is, in fact, a Christmas movie according to the Marvel head honcho — and Feige recently shared details about how the fan-favorite sidekick’s life was spared.

“Since like 2006… it’s been a wonderful collaboration and friendship. It’s so great to be part of the Spider-Man trilogy now, as well as the Avengers movies,” the Iron Man director and Avengers franchise producer said during a live-streamed interview with TikTok.

Added Feige, “I’ve said this many times, the MCU would not be what it is without Mr. Favreau at all. Obviously Iron Man, obviously everything there, but staying the heart and soul of Happy Hogan is what’s really amazing.”

Feige (and Favreau!) went on to tell Marvel fans how Favreau himself saved Hogan’s life with the “most important note” he ever gave to Marvel Studios:

“There was a little difference in the script than the final movie, which was that Happy died,” Feige said. “Jon had a note — that is one of the most important notes he gave us at Marvel — which was, ‘What if Happy was severely injured but did not die?'”

“He’s not lying! It’s true, it’s true,” Favreau said. “They accommodated it, and I’m so happy I’ve been a part of this and being able to be there with Tom Holland since the beginning. He’s such a pleasure to work with, and [Spider-Man director] Jon Watts, who is incredibly talented, it’s just fun to continue this relationship [with Marvel Studios]. It is a big part of my life, and these people are friends and also people I work with.”

You can currently catch Favreau as Happy Hogan in Spider-Man: No Way Home, currently showing at movie theaters worldwide.

Favreau is also involved in numerous Star Wars projects alongside Dave Filoni. The duo is currently part of The Book of Boba Fett — due to debut on Disney+ on December 29 — The Mandalorian Season 3, and Ahsoka.

What do you think about Jon Favreau saving Happy Hogan’s life?