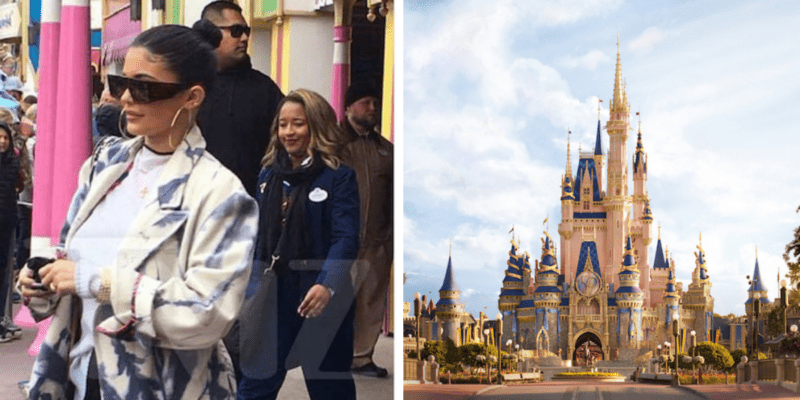 Disney’s Hollywood Studios isn’t the only Disney Park where you can spot famous faces.

Disney Parks across the world are visited often by celebrities and their families, who – just like us – enjoy the magic of theme parks.

Since its phased reopening, many celebrities have been spotted enjoying the magic of Walt Disney World Resort, with multiple sightings across Magic Kingdom, EPCOT, Disney’s Hollywood Studios, and Disney’s Animal Kingdom.

Reality star Paris Hilton also recently revealed in an interview that she wears prosthetics to “fit in” and not get attention when visiting Disneyland.

The Mouselets revealed on their TikTok a surprising encounter with the Kylie Cosmetics founder Kylie Jenner at Walt Disney World, in which an entire attraction was closed down to cater for the celebrity.

Kylie Jenner, 24, has over 284 million followers on social media and is currently pregnant with her second child with Travis Scott. They already share daughter Stormi, 3.

Alongside her sisters Kim Kardashian, Khloe Kardashian, and Kourtney Kardashian, the Kardashian family are big fans of Disneyland, having celebrated many kids’ birthdays there in the past with Kanye West.

The Mouselets reveal that during a visit to Walt Disney World, Kylie Jenner had the whole It’s A Small World attraction closed to Guests so that she and her family could ride the attraction alone:

The TikTok video describes how the Magic Kingdom ride was “cleared out” so the Jenners could ride the attraction with no Guests present:

“What happens when a celebrity visits Disney? I was actually at Magic Kingdom when Kylie Jenner was. I guess she decided she wanted to ride Small World. They actually shut down the entire ride, cleared it out, so she could ride alone.

This definitely doesn’t always happen though, but at the very least they’re usually chauffeured around backstage and they almost always have a V.I.P. tour guide with them.”

The Mouselets go on to clarify the reasons behind this Disney Parks celebrity regulation in a second video:

“Yesterday I shared that when Kylie Jenner visited Disney they cleared out the entire Small World ride for her. And some of you explained that this doesn’t always happen but at the very least they’ll usually have their own ride vehicle. What you guys said was this reason is for safety.

They don’t want Guests doing anything unsafe to try to access the celebrity on a ride. And that’s one of the reasons they’ll walk around with a V.I.P. tour guide as well. It keeps people from crowding around them and they can bring them backstage if needed. And yes this might seem a little over the top for a celebrity but the point is to not have the celebrity impact your day at Disney.”

Essentially, celebrities who want to enjoy the magic need some kind of safety buffer around them in case of Guests that are too eager to get near them.

In the past, however, some celebrities have been known to stand in line and queue just like any other Guest. Princess Diana made her sons Princes William and Harry wait in line on a visit to Walt Disney World back in 1993, while Pirates of the Caribbean (2003) actor Johnny Depp has been known to wait in the normal line at Disneyland in Anaheim.

With Disney Genie+ launching in Walt Disney World on October 19, it seems all you need to do is be famous to close down an entire ride to Guests to “skip the queue”.

What do you think of this celebrity safety regulation? Have you ever spotted a famous face at the Parks?