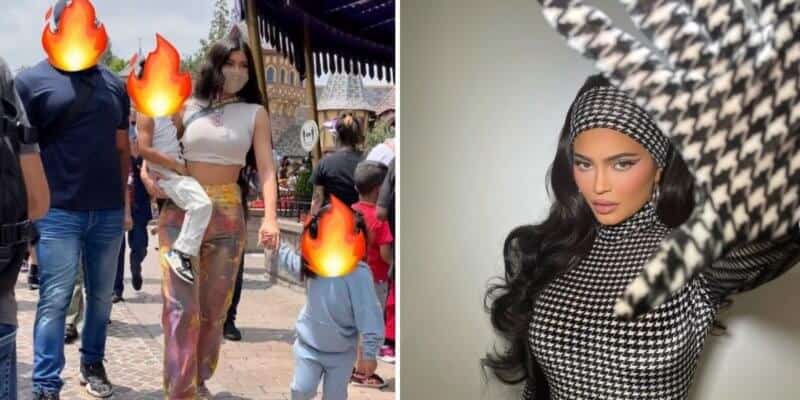 When Guests go to any of the Disney Parks, there is always the chance they’ll spot a celebrity.

Just like you and I, people in the spotlight love going to Disney World, Disneyland, and more! We recently wrote about Justin and Hailey Bieber heading to Universal Studios Hollywood. Katy Perry has had a pizza party in Cinderella Castle. Ryan Gosling has protested the Haunted Mansion overlay in Disneyland. Justin Timberlake built lightsabers with his son last week. Paris Hilton has admitted to wearing prosthetics when she visits! And, those stories are just the tip of the iceberg when it comes to celebrities visiting Disney.

Now that Disneyland is finally open, many celebrities are likely to head back as Anaheim, California is a short drive from Los Angeles, where many Hollywood stars live. It seems that some of the most famous stars in reality television decided to pop into Disneyland today, as we can see Kylie Jenner (Keeping Up with the Kardashians) is enjoying Disneyland Park!

Theme park reporter The Cali Bae posted a photo of Kylie on Instagram, which shows her two children and a gentleman, all of whom have been blocked out. One of the children is likely Kylie’s daughter, Stormi Webster, and it’s possible that the gentleman with her is Stormi’s father, Travis Scott. However, the two are not currently together as a couple.

Kylie is also an aunt to many kids since three of her sisters (Kim Kardashian, Khloe Kardashian, and Kourtney Kardashian) all have younger children, so the children in the photo could also belong to them!

That being said, we can see that Kylie is surrounded by Cast Members behind her, ensuring her protection and privacy. Often, when A-list celebrities visit Disney, they are escorted around by a Cast Member to avoid ending up in larger crowds, which could cause a scene.

The Kardashians are big fans of Disneyland, having celebrated many kids’ birthdays there in the past. Kim Kardashian and Kanye West are particularly familiar with the park since they have not only celebrated their daughter, North’s, birthday there, but they have experienced multiple VIP tours!

Have you ever seen a celebrity at a Disney Park? Tell us your story below!

Comments Off on Kylie Jenner Visits Disneyland With Secret Guest