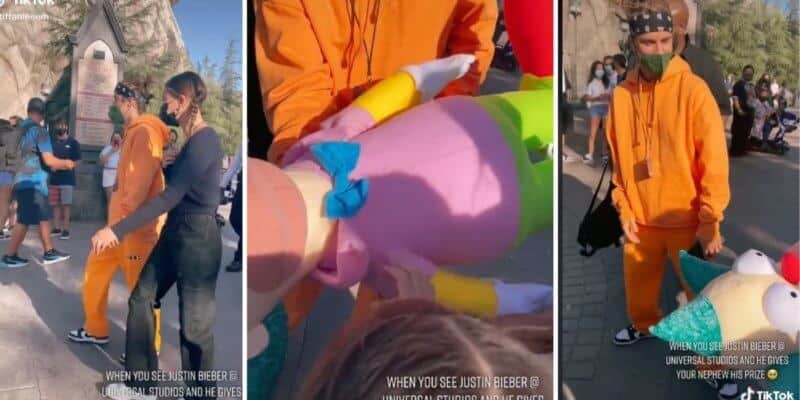 Celebrities often visit the Disney and Universal theme parks, and when they do, it can be very exciting for Guests!

Often, especially at Disneyland Resort or Walt Disney World, it can be tough to spot celebrities as they may be in a sort of disguise, or, they could have a Cast Member taking them backstage to avoid crowds. Unfortunately, with all the commotion and attention celebrities draw toward themselves, they often cannot experience theme parks the way that many regular Guests can. But sometimes, their actions can positively impact another Guest’s experience, which we have seen through Justin Bieber’s visit to Universal.

One of the world’s biggest superstars, Justin Bieber, recently visited Universal Studios Hollywood with wife and model Hailey Bieber. When the couple visited the theme park, they hung out in the Simpsons-themed land, Springfield, where Justin shot some hoops and won a Krusty the Clown plush toy.

In the below video from YouTubers Steve & Kai, you can see Justin play the carnival game and then hand it off to his wife!

The two were surrounded by security, which is not uncommon to see for celebrities at theme parks, especially ones as well known as Justin and Hailey Bieber. The YouTube video ends with the couple in front of Hogwarts in the Wizarding World of Harry Potter, however, there is more to the story.

TikTok user Tiff (@tiffanieeem) was also at Universal that day, filming Justin in front of Harry Potter and the Forbidden Journey. In the TikTok below, we can see that Bieber takes the Krusty toy out of security’s hands and hands it to a young child. In the TikTok, Tiff says that Justin actually handed the toy to her nephew, and clearly, it made his day!

Although Justin’s childhood stardom did not begin with Disney or Universal, he did have a lot of close connections with others who grew up in the Disney limelight, like Selena Gomez, who Justin dated on and off for multiple years. Later on, Justin married Hailey Baldwin (now Bieber).

The two own property in LA, so visiting Universal Studios Hollywood does make sense for the couple, as they would only be a short drive away. Now that Disneyland has also reopened, it will be fun to see if both Justin Bieber and Hailey Bieber hop on over to Anaheim to visit Mickey Mouse!

Have you ever seen a celebrity in a Disney or Universal theme park? Let us know below!