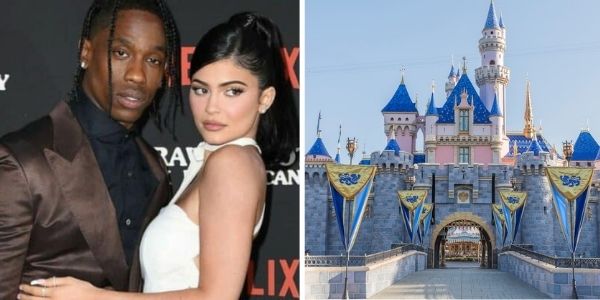 Disney Parks across the world are often visited by celebrities and their families, who – just like us – enjoy the magic of theme parks. Celebrities are spotted at both Disneyland and Walt Disney World quite often, so it’s a good idea to always be on the lookout when visiting.

Reality star Paris Hilton also revealed in an interview that she wears prosthetics to “fit in” and not get attention when visiting Disneyland.

But perhaps the most infamous Disney Guests are the Kardashians and Jenners. Recently, Kylie Jenner was spotted spending the day at Disneyland and on social media, unsurprisingly, freaked out.

Kylie Jenner, 25, has over 370 million followers on Instagram alone. Alongside her sisters Kim Kardashian, Khloe Kardashian, and Kourtney Kardashian, the Kardashian family are big fans of Disneyland, having celebrated many kids’ birthdays there in the past with Kanye West.

Several photos circulated online of the trip to “The Happiest Place on Earth” which you can see below:

Below is a video taken from Kylie’s official Instagram:

Stormi walked with her mom and her cousins Chicago, Dream and True to Disney!  Kylie Jenner via Instagram Stories

More photos were shared by @kkwwrld:

It’s not surprising to see Kylie and co. visiting Disneyland as there is so much to see and do! At Disneyland California Adventure alone, Guests can enjoy Buena Vista Street as they walk the roads Walt had in Hollywood, enjoy a hand-dipped corn dog at Award Wieners, Head to Cars Land to enjoy the neon signage and Radiator Springs Racers, check out the new Marvel-themed land in Avengers Campus, where they can meet Spider-Man, Loki, Ant-Man, Black Widow, Doctor Strange, and so many more characters.

And of course, you have to ride WEB SLINGERS: A Spider-Man Adventure and Guardians of the Galaxy: MISSION BREAKOUT. Rock on the Silly Symphony Swings as well, and go catch Jack Jack on Incredicoaster! The list of rides and attractions never ends!

Have you ever spotted a celebrity at Disneyland?