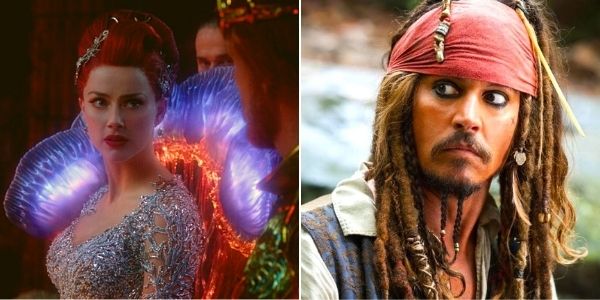 Actress Amber Heard is currently hard at work filming Aquaman 2 — officially titled Aquaman and the Lost Kingdom — alongside leading man Jason Momoa (Aquaman) and other costars like Dolph Lundgren (King Nereus) and Patrick Wilson (Oceeanmaster), all of whom are reprising their roles from the original Aquaman (2018).

New mom Heard has become a controversial figure over the course of the past year due to her ongoing legal battle with ex-husband Johnny Depp (Pirates of the Caribbean, Alice In Wonderland, What’s Eating Gilbert Grape, Corpse Bride), with some Depp supporters even boycotting Warner Bros. because Heard wasn’t fired from her role in the DCEU franchise.

The studio did let Depp go from his part as Gellert Grindelwald in the Harry Potter Fantastic Beasts spinoff series. Depp’s replacement, Mads Mikkelsen (Rogue One: A Star Wars Story) has admitted even he is not sure if Depp’s firing was “fair”.

Nonetheless, not everyone seems to have a negative opinion of Heard. In fact, former bodybuilder Lundgren recently spoke out about his time on the Aquaman sequel set, referring to Heard and everyone else involved in the production as a “class act”:

“That whole picture is just a class act. Everybody from James Wan and Jason Momoa to Amber Heard and the producers. I think this one is better. I think the script is stronger and it’s more exciting.”

The Swedish actor went on to share details about how incredible Aquaman and the Lost Kingdom — which is reportedly seet to follow Arthur Curry’s quest to find the Lost City of Atlantis — is going to be when it hits theaters:

“The technology has moved forward in four years, so I was really pleased to be a part of it. James Wan is just going to blow everybody away again by this tremendous world that he creates. He’s involved in every little detail, even every little piece of every weapon, and I think it’s going to be great.”

If you haven’t followed the ongoing Johnny Depp vs. Amber Heard case, in November 2020, the Sleepy Hollow star lost his libel lawsuit against U.K. News Group Newspaper publication, The Sun, for their report that he had allegedly engaged in domestic violence — including a reported “hostage” situation during a Pirates of the Caribbean shoot in Australia — against ex-wife Amber Heard on multiple occasions.

In addition to being let go as Grindelwald, Disney fired Depp from his iconic role Captain Jack Sparrow in Pirates as a result of the controversy.

What do you think about Amber Heard?