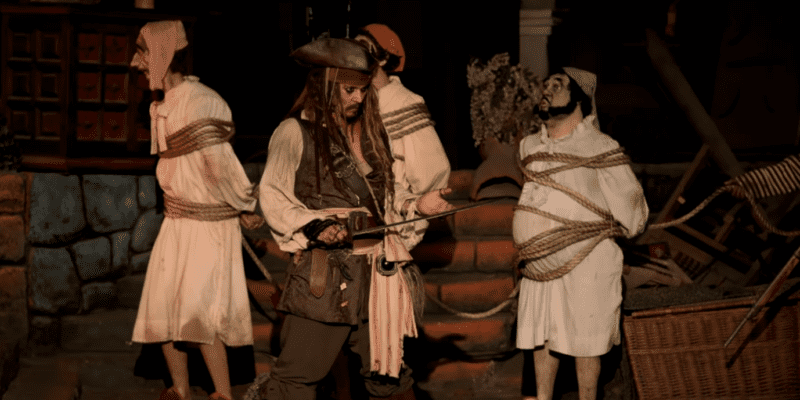 Hollywood actor Johnny Depp is best known for his role as the one-of-a-kind Captain Jack Sparrow in Disney’s Pirates of the Caribbean franchise.

The movie series — which began with Pirates of the Caribbean: Curse of the Black Pearl (2003) — was inspired by the Disney Parks ride of the same name. But, thanks to the popularity of the five-film franchise, the ride also eventually drew inspiration from the films.

Audio-Animatronics of both Depp’s Captain Jack Sparrow and Geoffery Rush’s Captain Hector Barbossa have been added to Pirates of the Caribbean rides around the world. And, at one point, Depp shocked Disneyland Resort Guests by actually “becoming” the Jack Sparrow animatronic!

Instead of the usual animatronic in Depp’s likeness, visitors were treated to the actual actor reciting lines from the popular film franchise while brandishing his sword at the Anaheim, California, theme park.

This is not the first time Depp has stopped by the ride that inspired 2003’s “Curse of the Black Pearl,” but this is his first appearance during the “Dead Men Tell No Tales” era of his iconic captain’s log.

You can watch a video of Johnny Depp shocking Disneyland Park Guests in Anaheim, California below:

If you haven’t followed the ongoing Johnny Depp vs. Amber Heard case, in November 2020, the Alice In Wonderland star lost his libel lawsuit against U.K. News Group Newspaper publication, The Sun, for their report that he had allegedly engaged in domestic violence — including a reported “hostage” situation during a Pirates of the Caribbean shoot in Australia — against ex-wife Amber Heard (Aquaman, Aquaman and the Lost Kingdom) on multiple occasions.

Related: Johnny Depp’s ‘Pirates’ Co-Star Addresses Whether the Controversial Actor Should Be Replaced

Depp has lost both of his most notable recent roles — Captain Jack Sparrow in Pirates and Gellert Grindelwald in Warner Bros. Harry Potter Fantastic Beasts spinoff franchise — as a result of the controversy.

Did you know Johnny Depp once surprised Disneyland fans as an animatronic?