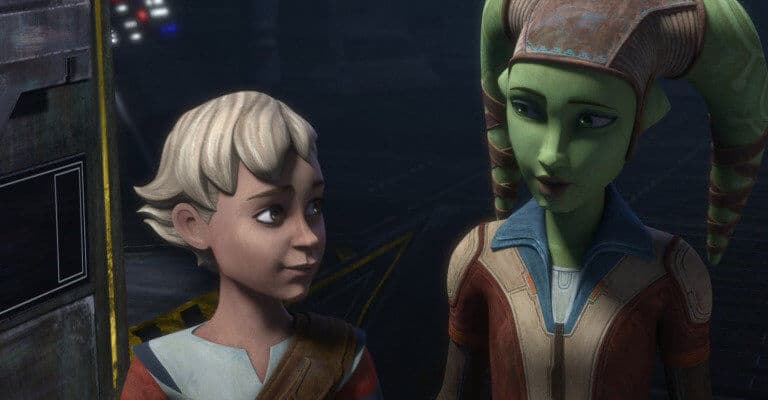 Not only did we get to see more of Hera’s backstory as a young girl on the Twi’Lek homeworld of Ryloth, but we discovered how the young Ghost ship captain-to-be connected with Clone Force 99, first-generation Jango Fett clone, Omega (Michelle Ang), and the larger Star Wars story.

Hera returned in the latest episode of The Bad Batch, Episode 12 (“Rescue on Ryloth”), alongside our elite squad of clone troopers — Hunter, Wrecker, Echo, and Tech (Dee Bradley Baker) — to save her parents Cham Syndulla (Robin Atkin Downes) and Eleni Syndulla (Ferelith Young) from the Galactic Empire’s clutches.

To celebrate her return to the Star Wars franchise, voice actress Vanessa Marshall has been making the press rounds. In a recent interview with CNET, she shared details about how her return as a young Hera Syndulla was inspired by a somewhat surprising source — Spider-Man icon Mary Jane Watson!

Marshall, who voiced Mary Jane in Spectacular Spider-Man, shared her initial excitement at being asked to play Hera again in another Dave Filoni series following the end of Star Wars Rebels:

I got an email from my voice-over agent, asking if I would be interested in playing Hera at a much younger age. I was thrilled. And then my mind started racing: “I wonder how old she is? I wonder if it’s on Ryloth? What does this mean?” And then it was some time before I received the script and we did the recording. They knocked it out of the park, it was so well written that it was easy to act.

She continued, noting that her reprisal of Hera was inspired by her performance as a teenage Mary Jane:

For Mary Jane in Spectacular Spider-Man [a beloved 2008 animated series], I almost didn’t audition for it because I thought “Oh, this will never happen. I mean, why am I doing this?” But my agent convinced me that I should try.

I imitated a friend of mine who I thought sounded the way Mary Jane would sound. I know how she thinks and I know how she feels. I guess I was doing an imitation of her. But there was something about it that I believe rang true…

Marshall also shared how much fun she had returning as the fan-favorite Rebels character and sharing some of her early life:

…They were in high school in that show, so I reflected on how I arrived at Mary Jane’s voice, then also put a French accent on Hera as a younger person. I don’t know if that made it harder or easier, because it was further away from the adult Hera, but it was definitely more fun.

At this time, it seems likely that Star Wars Rebels characters will make their live-action debut in an upcoming Star Wars series, whether it is in The Mandalorian universe or in Diego Luna’s Rogue One prequel series, Andor.

Are you looking forward to seeing more of Hera Syndulla and the Ghost ship crew in the Star Wars universe in the future?

Catch new episodes of The Bad Batch streaming every Friday on Disney+. Next up in the Star Wars universe is Mandalorian spinoff series, The Book of Boba Fett in December 2021. The Mandalorian Season 3 and Ahsoka are expected in 2022.