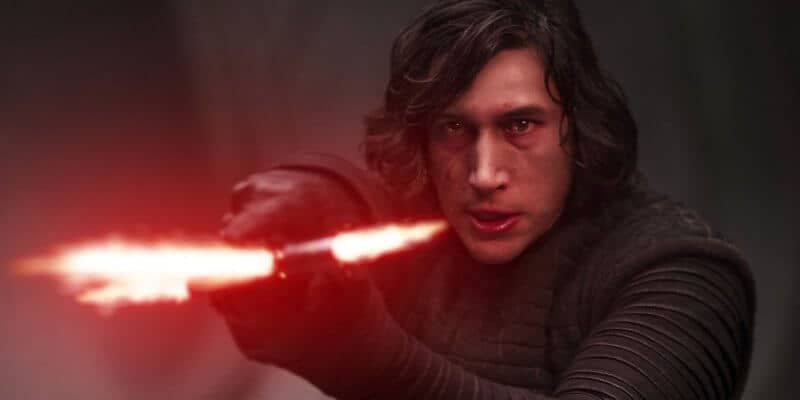 Former United States Marine and current actor Adam Driver (Inside Llewyn Davis, Paterson, Marriage Story) began his Hollywood career in 2010 with TV series The Unusuals. But, he truly became a household name when he was cast as the villainous Kylo Ren in the Star Wars sequel trilogy.

“First day we were rocking with the lightsabers and he would just be [mouthing lightsaber noises],” Oyoung said. “Me too! And I had to remind him, ‘Hey man, we’ve got to stop. Because when they film, you’re going to start doing that. And then they’re going to catch you. And it’s going to be strange. You don’t want to get into the habit.'” So any time you see Kylo Ren on screen, remember: he had to be taught not to make lightsaber noise.

Following The Mandalorian Season 2 finale episode, which reintroduced Jedi Knight Luke Skywalker (CGI Mark Hamill) to the Star Wars universe as Grogu’s Jedi Master, many Star Wars fans have been wondering if a young Ben Solo could make an appearance in an upcoming Jon Favreau and Dave Filoni streaming series.

The Mandalorian takes place approximately five years after Star Wars: Episode VI – Return of the Jedi (1983) and about 25 years prior to The Force Awakens, which features Ren killing his father Han Solo (Harrison Ford).

This means that somewhere in the unexplored part of the timeline, young Solo destroys Skywalker’s new Jedi Academy — presumably with Grogu present.

The link between the sequel trilogy’s primary antagonist and the ongoing Mandalorian saga is undeniable, so it certainly seems likely that more backstory will be provided at some point, especially given that Favreau and Filoni have already referenced the sequels by  diving into Supreme Leader Snoke’s existence.

At this time, no information about Ben Solo — or Kylo Ren’s — return to the Star Wars universe has been shared by Disney or Lucasfilm.

However, it’s worth noting that Driver is the only sequel trilogy star who hasn’t expressed that he has no immediate plans to return to the Star Wars galaxy.

The final Skywalker Saga trilogy’s core trio — Daisy Ridley (Rey), John Boyega (Finn), and Oscar Isaac (Poe Dameron) — have all indicated they have no intention of reprising their Star Wars roles, at least not anytime in the near future.

Now that The Force Awakens, The Last Jedi, and Episode IX – The Rise of Skwyalker (2019) are over, United States Armed Forces veteran Driver is currently working on four projects — The Last Duel, House of Gucci with Lady Gaga, 65, and White Noise.

Do you hope to see actor Adam Driver return to Star Wars? What do you think about this hilarious lightsaber story involving the actor?