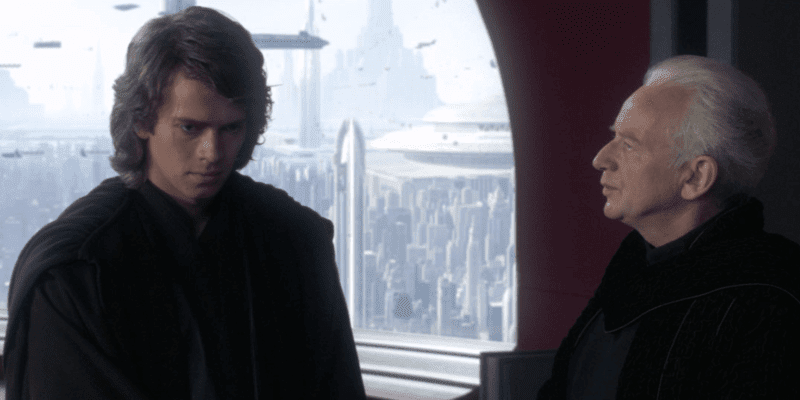 In the Star Wars story, Anakin Skywalker was believed by many to be the prophesied Chosen One who would bring balance to the Force — his why the Jedi Council eventually allowed him to be trained in the ways of the Jedi Order even though he was older than many Padawans when he began his Jedi journey.

However, the powerful Force user had a tumultuous experience throughout his training. Following the death of his original Jedi Master, Qui-Gon Jinn (Liam Neeson) at the hands of Darth Maul (Ray Park) in Star Wars: Episode I – The Phantom Menace (1999), young Anakin was trained by Jinn’s apprentice, Obi-Wan Kenobi (Ewan McGregor).

Anakin was swayed to the dark side because of his attachment to his loved ones, namely Padmé Amidala (Natalie Portman). Padmé, of course, died in childbirth with twins Luke and Leia after learning that the man she loved had become the most feared villain in the galaxy.

Tragically, Anakin was only seduced by Chancellor Palpatine/Darth Sidious (Ian McDiarmid) because he wanted to save Padmé from death. Both the Jedi and the Sith had long sought immortality — the Jedi could sometimes achieve it by becoming Force Ghosts, but the Sith, due to their dark nature, struggled to find a peaceful life after death.

This greatest secret of the Sith is how Palpatine was kept alive to be part of the conclusion of the Skywalker Saga, Episode IX – The Rise of Skywalker (2019). Although this was never explained in the JJ Abrams film, the novelization of the movie explains how Palpatine learned the power of essence transfer from his own Master — and murder victim — Darth Plagueis:

“The falling, dying Emperor called on all the dark power of the Force to thrust his consciousness far, far away to a secret place he had been preparing. His body was dead, an empty vessel, long before it found the bottom of the shaft, and his mind jolted to new awareness in a new body – a painful one, a temporary one.”

Palpatine ultimately convinced Anakin to turn to the dark side by teasing the existence of essence transfer, telling the desperate younger man, “The dark side of the Force is a pathway to many abilities some consider to be unnatural”.

Palpatine insisted these secrets of the dark side could not be learned from a Jedi. His words encouraged Anakin to pursue the dark side rather than the light.

All the best lies contain a half-truth, and we now know Palpatine was not lying when he claimed Darth Plagueis possessed the power to conquer death. But a Sith Lord can only transfer their own essence through the use of the dark side, meaning essence transfer is useless when it comes to keeping anyone else alive. Padmé was always doomed, and the only hope Anakin clung to – the idea the dark side could save her – was nothing more than an elaborate hoax.

The true tragedy here, of course, is that Anakin cared so much that it ultimately led to his demise, but nothing would have changed for his beloved no matter what choices he made. He only missed his last moments with her because of his desperation — and Palpatine’s lies.

What do you think about how Anakin Skywalker was tricked using the Sith’s greatest secret?

Catch the untold story of Darth Vader and Obi-Wan Kenobi on Disney+ in 2022. Hayden Christensen and Ewan McGregor are set to reprise their prequel trilogy roles in Deborah Chow’s Obi-Wan Kenobi special event series. The show will take place approximately ten years after Revenge of the Sith (2005) and may showcase Luke Skywalker’s childhood on Tatooine.

Comments Off on ‘Star Wars’ Reveals the Sith’s Greatest Secret