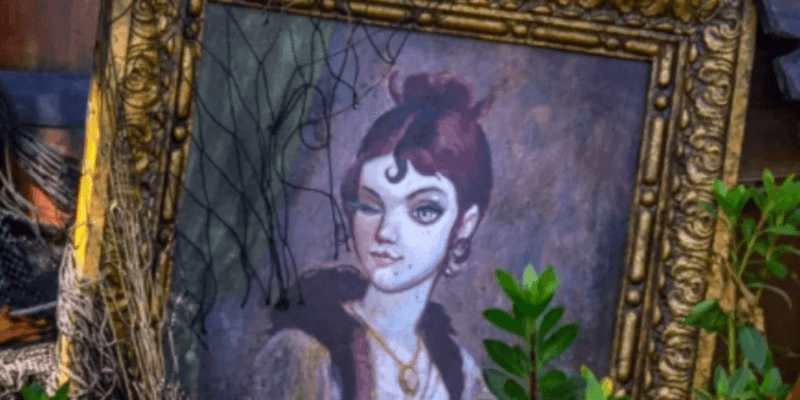 Today, Disney Parks released a behind-the-scenes look at the new Haunted Mansion updates for Disneyland Park. Fans were quick to spot the return of a legendary changing portrait that could change New Orleans Square forever.

Updates to the Haunted Mansion

The Haunted Mansion located at Disneyland Park at Disneyland Resort and Magic Kingdom at Walt Disney World Resort is a fan-favorite attraction featuring grim grinning ghosts. Once they materialize, these happy ghouls put on a frightful show throughout the lively mansion. Among the many features in the Haunted Mansion, like the stretching room or the hitchhiking ghosts, the changing portraits have stood the test of time since Disneyland’s Haunted Mansion opened in 1969.

At Disneyland Park, once Guests drag their bodies from the stretching room, they’re greeted by five ghoulish portraits. Some feature individuals directly tied into the mansion, and others feature objects or events that heavily impact the Ghost Host’s story. These portraits change as lightning flashes through the window, revealing ghastly images.

April to December, one of the most famous portraits, was replaced in 2005 and lived on only at the Magic Kingdom’s Haunted Mansion and Tokyo Disneyland with the Sinister 11. Now, this portrait is making her long-awaited return to the original Haunted Mansion once Disneyland Resort reopens on April 30. And when she returns, Guests will see her in her own viewing area in the final path before Guests board their doom buggy.

April to December (commonly referred to as “April-December”) was an original changing portrait that featured a beautiful muse with the world “April” written in the top right of her portrait. Upon the flashes of lightning, April slowly began aging with each new month until she turns into a frightfully old lady in December, hence the “April to December” name.

Disney Parks Blog shared an inside scoop on this portrait’s cadaverous return:

Check out the video below for a highlight of April to December’s return:

Disneyland’s Michele Hobbs, who oversaw the Haunted Mansion refurbishment, spoke with the Los Angeles Times and gave some insight on this prominent ghost making her return from her creepy old crypt:

Here, resurrected, is a portrait from [Marc] Davis, the Disney legend who designed such characters as Snow White, Tinker Bell and Maleficent…

Davis’ “April to December” painting, in which a gorgeous woman slowly transforms into jagged bones and aged flesh, was removed from the Haunted Mansion’s portrait hallway at Disneyland in the mid-2000s.

Hobbs says that at the time, the painting’s gradual four-scene change didn’t work with a technological update to the ride, which created crisper, more instantaneous two-slide transformations. Imagineering has now extended the portrait hallway, placing a remade version of Davis’ art around a bend — past the illusion of the busts watching guests.

Marc Davis, one of Walt Disney’s legendary Disney Animation Artists and king of frightfully fun gags in the Haunted Mansion, originally envisioned the April to December portrait during the attraction’s early concept stage in the 1950s and 1960s.

In the above image, we can see the final walkway leading to the doom buggies. And just out of view sits April to December, the sixth changing portrait sitting the Haunted Mansion loading area. Right before you board your doom buggy, April will give you a wink. This wall-to-wall creep slowly changes from April to December, showcasing April progressively turning older. Once she gets back to April, the beautiful haunt gives Guests a wink.

April to December’s return may feel quite random. While not every Disney Parks fan knew about this changing portrait, it is interesting to dive into the lore.

The portrait is actually connected to the Society of Explorers and Adventurers (commonly referred to as “S.E.A.”), a secret group of globe-trotting philanthropists sharing their discoveries to the world.

According to the S.E.A. Wiki Fandom:

The Society of Explorers and Adventurers or the S.E.A. is a fictional organization in various attractions at the Disney theme parks, originating in Tokyo DisneySea… Consisting of scientists, explorers, researchers, artists, travelers and adventurers from around the globe, S.E.A. is dedicated to the continued exploration of the world’s oceans and exotic lands…

The mission of the Society of Explorers and Adventurers is to collect, conserve, and curate valuable cultural and artistic artifacts from around the world and make them available to the public in an artistically pleasing and sensitive manner. It is furthermore the mission of the organization to equip and mount socio-cultural expeditions to discover, explore, chronicle and protect the artistic achievements of human society, past and present, exalted and forgotten.

Over recent years, the S.E.A. has gained a somewhat cult following within the Disney Parks fan community. The Skipper Canteen at Magic Kingdom Park and the Jungle Cruise’s re-theme are even tying in some famous members: Albert Falls and Dr. Kon Chunosuke (the poor fellow stuck second from the top of the tree in the Jungle Cruise, as seen below).

Now, Disney is focused on connecting all of their popular attractions, like Big Thunder Mountain, Pirates of the Caribbean, and The Haunted Mansion, together with one overarching storyline.

S.E.A. and the Haunted Mansion at Disneyland

The S.E.A. culminates with Disneyland’s Haunted Mansion, as the original concept art and early conceptions of the attraction featured a much darker tone that inspired rich backstories for other attractions.

Originally conceived by Walt Disney as a walkthrough attraction of the “Museum of the Weird,” one unused — but later recycled — storyline by Imagineer Ken Anderson followed Captain Gore, a murderous pirate with deep roots with New Orleans Square that owned the mansion.

Upon celebrating his new marriage to a beautiful young woman (believed to be an early version of Constance Hatchaway), Bartholomew Gore set sail from New Orleans Square and embarked on a murderous voyage. Unbeknownst to his new wife, Gore was a deadly pirate who scored treasure troves from his victims. Much like Beast instructs Belle to beware of the West Wing in Beauty and the Beast, Captain Gore instructed his wife not to go into a part of the Haunted Mansion: the attic.

Of course, his bride ventures into this room. Discovering his husband’s true identity, Captain Gore suddenly appears in the door. Returning from his voyage, Bartholomew searched through his mansion to greet his bride. In a fit of rage, he pushes his bride out the window (hence the window in Disneyland’s attic room scene near Constance Hatchaway).

Throughout the years, Haunted Mansion’s storyline has changed, as well as its resident. Before Constance Hatchaway, a black widow bride, a ghostly bride with a red-beating heart, greeted a ghostly Guest in the attic. This version of the bride adhered to the Captain Gore theory, as the pirate later contacted the help of Madame Leota to speak with his wife in the afterlife. This results in his death (seen in the stretching room), Madame Leota’s transformation into a seance sayer, and the ghosts overtaking the mansion.

Storylines merge with the Ghost Host, though. Some suggest that voice is Captain Gore, while others feel that it’s Master Gracey.

These ghosts, however, are the crown jewel of S.E.A.’s forgotten past and the potential cover-up of the dark mansion. Captain Gore now belongs to the Sinister 11, the antithesis to S.E.A. comprised of ghastly individuals aiming to scare their audience. Now, it seems that Disney could be tying these groups together with the new portrait.

Below you can watch a video about the secret tomb:

It’s reported that Disney originally planned that this crypt would lead either to the Haunted Mansion or to a secret catacomb and tomb of a famous pirate located on Tom Sawyer’s Island.

Walt Disney was obsessed with the famous pirate-turned-American hero Jean Lafitte. In the War of 1812, the French privateer and smuggler heroically aided the United States in defense of New Orleans against the British. Not much is known about Lafitte’s early life, but historians claim that he and his brother founded a blacksmith shop in New Orleans that served as a hub for smuggled goods brought ashore.

Walt honored Jean Lafitte throughout his New Orleans Square with an anchor (currently near Cafe Orleans) that fictiously belongs to the captain, as well as naming the loading area in Pirates of the Caribbean attraction “Laffite’s Landing.”

There was even a jewelry shop in New Orleans Square called Lafitte’s Silver Shop. And, the storage area on Tom Sawyer’s Island for Fantasmic! is called Lafitte’s Tavern. We can’t make this stuff up!

Here’s another connection — in Ken Anderson’s original Haunted Mansion storyline with Captain Gore, the maritime was a close friend of Jean Lafitte. The two partnered in business (of commandeering ships) regularly!

The crown jewel in Jean Lafitte’s homages would have been the crypt outside the Haunted Mansion leading to a dead pirate’s tomb. This pirate, Jean Lafitte, would then tie The Haunted Mansion, Pirates of the Caribbean, and Tom Sawyer’s Island at the Disney Park together.

Eddie Sotto, former Senior Vice President of Concept Design of Walt Disney Imagineering, backed up this theory and supported the idea of New Orleans Square is entirely connected, so it’s got to be legit!

Flashback to 2006, and you’d experience a pirates-themed show in New Orleans Square. Apart from this comedy-filled, swashbuckling adventure for the release of Pirates of the Caribbean: Dead Man’s Chest (2006) was a pirate ship-themed set. Sitting at the base of this set was the original April to December changing portrait!

The very portrait hand-painted by Marc Davis sat right among the Pirates of the Caribbean props. Coincidence?

Disney is famous for recycling their props from extinct or old attractions, but including this very niche portrait in a pirates-themed show raises an eyebrow.

Let’s put on our tinfoil caps, people. Jean Lafitte’s roots with The Haunted Mansion, a secret catacomb under New Orleans Square connecting each attraction, and a forgotten portrait randomly reappearing for a pirate show… Hmm, something fishy is going on.

Is Disney connecting New Orleans Square’s attractions together with the April to December portrait? It’s a possibility. This is all a far-fetched theory and Disney has not confirmed anything about this, but April’s return to the Haunted Mansion raises the question of what the House of Mouse implies with this update.

What’s Next for Disneyland

Aside from refurbishments for attractions like The Haunted Mansion, the Matterhorn Bobsleds, Snow White’s Enchanted Wish, and Story Book Canal at the Disneyland Resort, Disney recently announced their planned expansion for the Southern California resort: DisneylandForward. Though Disney CEO Bob Chapek has not spoken about the expansion for the Downtown Disney District, Disneyland Park, and Disney California Adventure Park, concept art suggests Frozen, Tangled, or Peter Pan-themed lands could be coming to the Anaheim resort.

Could Tomorrowland expand over into Downtown Disney with a Tron Light Cycle Power Run or another Fantasyland feature a roller coaster about Tinker Bell and the Lost Boys? Only time will tell.

Fastpass selections and outdoor dining experiences are sure to expand over the next decade with DisneylandForward, and Orange County will never be the same! Be sure to stay up to date with Inside the Magic as we let you know what’s coming to this Disney theme park next!

Do you think that New Orleans Square is connected? Let us know in the comments below!