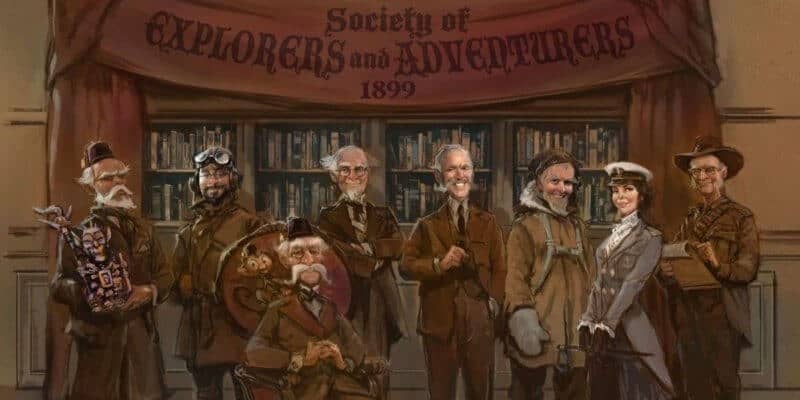 When you visit Magic Kingdom Park in Orlando, Florida and ride beloved attractions such as The Haunted Mansion, Jungle Cruise, and Big Thunder Mountain Railroad, if you look closely at the attraction queue, you may realize that all of these rides have storylines with fictionalized characters that exist within the theme park. The best thing is, the magic does not start or stop at Walt Disney World’s Magic Kingdom, but spreads throughout every Disney park all over the globe.

Now, Disney is finally listening to the call that many Disney fans have been making years and creating a TV series on their streaming network, Disney+, that will further dive into the stories.

Yes, Disnerds, this means the Disney S.E.A. (Disney’s Secret Society of Explorers and Adventurers) is FINALLY coming to life!

The Hollywood Reporter announced that the Magic Kingdom Universe — the worlds within the Disney Parks — will be explored in the new series, and the first part of that series will explore the S.E.A.

The media giant is teaming with For All Mankind creator Ron Moore to develop a franchise for streamer Disney+ that is set in Disney’s beloved Magic Kingdom. The first project in the works as part of the so-called Magic Kingdom Universe is The Society of Explorers and Adventurers, which is set in a world where all the themed lands and characters of the Disney parks and classic films actually exist in another reality.

Moore is reportedly working closely with Disney — including the Imagineers who molded these characters — and a writers’ room has already been set up for the show. When asked why Moore chose Disney while having other lucrative offers on the table, he said:

“I decided to go there mostly because my childhood was built around a lot of things that were Disney. I am a huge fan and aficionado of the Disneyland park in Anaheim to the point where I would go there by myself periodically and ride the rides. The opportunity for me to get to work on a lot of the classic IP that Disney has and things in their library that meant so much to me as a child growing up and that I have shared with my children ultimately was just something I couldn’t pass up.”

Lesley Goldberg (@Snoodit) also took to Twitter to share the good news after publishing the breaking news about the new series!

As we have previously reported, the Disney S.E.A. emerged from the minds of Imagineers all over the world. Some credit The Adventurer’s Club lounge as the birthplace of the Society (which used to find a home in Joe Rohde’s now-defunct Downtown Disney Pleasure Island location), while others say that Tokyo DisneySea Fortress Explorations attraction holds the key to the start of S.E.A.

The list of who is in the Disney S.E.A. can expand each time a new ride is conceptualized, but these attractions cannot have existing IPs. For example, Star Wars Rise of the Resistance at Star Wars: Galaxy’s Edge would never have included new S.E.A. characters since it already featured Star Wars sequel trilogy characters.

Recently, Disney many of Disney’s new rides — included the aforementioned Rise of the Resistance and the upcoming Guardians of the Galaxy: Cosmic Rewind roller coaster — have showcased existing films and TV show casts, which leaves little room to create new characters. Luckily, there are many original attractions overseas that help round out the Secret Society of Explorers and Adventurers — and always offer the opportunity to add more!

The first show in this new Disney+ project exploring the Magic Kingdom Universe will showcase Disney’s Society of Explorers and Adventurers. So, who could the cast include?

In Mystic Manor (Hong Kong Disneyland), Guests can see a photo of the Disney S.E.A. in the queue. The attraction first introduces Lord Henry Mystic as a member of Disney’s Society of Explorers and Adventurers, but confirms seven additional members (listed in order of appearance from left to right) in the 1899 Society grouping. Next to each name, I will also list notable attractions and parks that each member is associated with:

Other known members of Disney’s S.E.A are:

Side note: Jock Lindsey actually first appeared in Indiana Jones as Indie’s pilot, which makes him the only character to not be originally created for a Disney attraction or location.

Personally, I believe that there is a connection with George Hightower from The Haunted Mansion in the Disney S.E.A., but that is an article for another time (Hint: George Hightower is related to Henry Hightower, a member of the S.E.A.). In terms of the show, I think what is most exciting is that Disney has the chance, for the first time, to acknowledge all their parks as one, and combine them.

Professor Garret Reed is a criminal, so we should expect to see lots of drama surrounding him, as well as Henry Hightower III.

Dr. Albert Falls can also be a great linking member of the S.E.A. because the Jungle Navigation Company can travel, which brings him to various parts of the world — plus, according to the S.E.A., Falls is currently missing, which could be an exciting storyline.

Truly, each character holds an entire world behind them that interacts with the others. This is something that many Disney Parks Guests barely know about. The series will likely not only excite Disney fans who love the S.E.A., but will also teach many Disney fans about the backstories of the characters on the rides they love, giving their experience an even deeper meaning.

This isn’t Moore’s first stint with Disney, as he previously toyed with a Star Wars live-action TV series with George Lucas for Disney-owned ABC. Even though that was over ten years ago, Moore is still “eager to revisit the franchise as part of his lucrative new Disney pact.”

For now, Disney fans can rest assured knowing that this is a huge Disney Parks integration that will delve into the lives of those in the S.E.A., and finally connect the dots for many Disney fans who have been studying their backstories for years!

Do you know of the Disney S.E.A.? What character backstories are you excited to see brought to life?