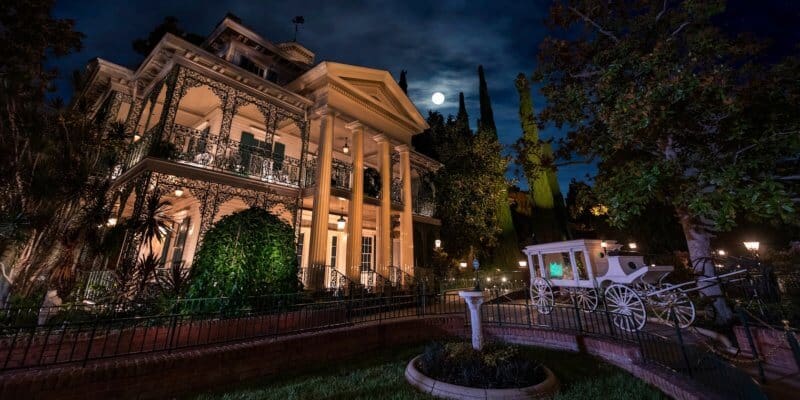 The Haunted Mansion is a Guest-favorite attraction at both Walt Disney World in Florida and Disneyland Resort — and it’s one of the oldest rides in Walt Disney’s original Magic Kingdom in Anaheim, CA. However, even though the attraction is beloved by many, it may be possible for it to undergo some changes in the future.

Disney has continued to announce updates and changes for rides at Disneyland Park at Disneyland Resort and Magic Kingdom Park at Walt Disney World Resort (specifically, the retheme of Splash Mountain to a Princess and the Frog attraction and the reimagining of the characters and storyline of Jungle Cruise). Amid these announcements, fans have wondered whether other attractions at the California and Florida theme parks could be reimagined or changed, as well.

One ride that some fans think deserves some attention is the Haunted Mansion at Disneyland and Disney World. At the end of the stretching room scene when Guests first enter the mansion, Guests can look up and see the depiction of a hanging body swinging from the ceiling. Many feel that the scene should be removed from the attraction, but Disney has not commented on the possibility of this — until now.

The Los Angeles Times shared in an article today that Disney is aware of the complaints regarding the hanging scene in the Haunted Mansion attraction.

Recently, some have called for the removal of a hanging scene in the Haunted Mansion, noting its association with suicide and lynchings.

Disney has heard those complaints, but for now, the scene will remain unchanged. “It’s been discussed for sure,” says Disney’s Michele Hobbs, who managed the Haunted Mansion refurbishment. “It’s definitely something that we’re thinking about.”

Disney has confirmed that the refurbishment of the Haunted Mansion attraction at Disneyland did not include the removal of the hanging scene, and the company has not indicated that the scene will be changed or removed from either the California or Florida Disney theme parks. However, as the quote above indicates, changing the scene is “definitely something that [Disney is] thinking about.” We’ll report back if any other information is released, but note that when you enter the stretching room on your next visit to Disneyland or Magic Kingdom, the scene will still be there.

We previously posed the question of whether Disney should remove the hanging scene from the Haunted Mansion, and dozens of Disney fans shared their own perspectives on the possibility. You can read more here.

Click here for our complete guide to the Haunted Mansion at Disney Parks.

Read the full description of the Haunted Mansion attraction at Disneyland below, courtesy of the official website:

What do you think of the hanging scene in the Haunted Mansion? Should Disney leave the attraction as-is, or should the scene be removed? Let us know in the comments.