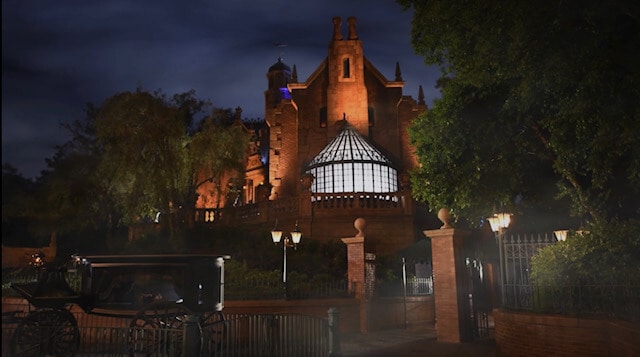 The Walt Disney Studios has had a major streak with their live-action adaptations of classic Disney films, which has Disney fans thinking of what other classics could Disney reimagine. One, in particular, has already been given the live-action treatment, however, it didn’t resonate with fans. Yes, I am talking about the live-action Haunted Mansion film from 2003.

The good news is, Disney has a chance to redeem themselves as they recently announced a new live-action movie based on the classic Disney Parks attraction. So, how can Disney reimagine a Haunted Mansion film and make it a hit? Here’s what I think!

The Haunted Mansion is a classic and beloved attraction, so it seemed like a no-brainer to bring the magic of this story to the big screen. Coming off the heels and the success of the summer box-office hit Pirates of the Caribbean: The Curse of the Black Pearl, a film modeled after another attraction was sure to be a success as well.

Unfortunately, the Eddie Murphy-led film did not do so well with audiences or with critics. It was agreed among fans and film critics that The Haunted Mansion movie wasn’t funny nor was it scary. It’s also on the lower end of the Tomatometer, receiving a 14% and an audience score of only 30% on the Rotten Tomatoes website. And ever since, Haunted Mansion fans have been asking for a film to redeem their favorite Disney attraction.

The good news is that a Haunted Mansion film is in currently development! Unfortunately for fans, this project has been in development for years now.

In order to take on this massive project, Disney knew they would need an A-list director and script. That’s where famed director Guillermo Del Toro comes in. With his expertise in the horror and drama film industry, he seemed like the perfect match.

However, in recent reports, we’ve learned that Disney is looking to Katie Dippold to write a script based on the attraction. Dippold is known for her work in more comedic films and television. She did work on the recent reimagining of the female-led Ghostbusters film in 2016, in which the effects looked similar to effects used in the current Haunted Mansion attractions. This could give her the edge to create a great script that embodies the spooky side of the mansion with a mix of the more tongue-in-cheek elements.

In Order To Succeed, The Film Needs an Original Story

Depending on which elements Disney wants to lean towards will ultimately determine the fate of this film.

I feel that going the route of the Pirates of the Caribbean films would gain the most success for the Haunted Mansion film. Focusing on a series of main characters proposed with a dilemma and navigating their way through all the famous scenery that is famous in the attraction.

Then, just as in the Pirates films, sprinkling in some iconic scenes, characters, and adding a touch of humor along the way could resonate with fans. This way, it doesn’t take away from the history and what makes the Haunted Mansion great but also keeps that Disney touch of whimsy.

Unlike the 2003 adaptation, which focused on an outside family that happens upon the mansion, I, personally, would like to see more of an origin story of sorts. Where viewers learn how the mansion came to be. A problem could be presented and wrong has to be corrected.

Also unlike the first Haunted Mansion film, the mansion would still remain the mansion and still haunted. This will help preserve the story of the attraction and allow Imagineers to update iconic scenes for the better or with fresher technology. That way the film and the attraction can remain a timeless classic.

What would you like to see in the new live-action Haunted Mansion movie? Let us know in the comments!