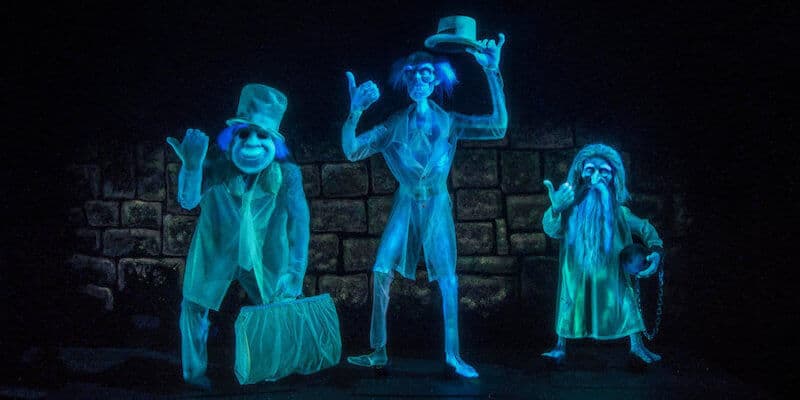 Welcome, Foolish Mortals to the Haunted Mansion. I am your host, your Ghost Host. And today, I will be telling you everything we know so far as well as the possibilities surrounding the previously announced Haunted Mansion film.

But first, we must go back to 2003, when Disney brought us a live-action film based on the popular and classic Disney Parks attraction, the Haunted Mansion. This film — which starred Eddie Murphy, Marsha Thomason, Terence Stamp, Nathaniel Parker, and others — wasn’t widely received. And now, we know that Disney decided to work on yet another live-action film based on this Disney Parks attraction.

What We Know About The Upcoming Live-Action Haunted Mansion Film

Fast forward to 2020 when Disney announced that they are finally moving forward on this brand new Haunted Mansion movie, getting Haunted Mansion fans everywhere excited for what’s to come.

We already know, thanks to The Hollywood Reporter, that Katie Dippold is set to write a feature based on the classic Haunted Mansion attraction at Disney Parks (the original of which is located at Disneyland). Given that the director is well-versed in comedy, perhaps the new movie is intended to be a comedy (or at least a funnier film than the original), but nothing seems to be set in stone.

Dippold was previously a writer on the popular TV comedy series Parks and Recreation before she started in the film industry. This is where she went on to work on the 2013 action comedy movie The Heat, which starred Sandra Bullock and Melissa McCarthy.  Dippold also worked on the all-female reboot of 2016’s Ghostbusters and wrote Snatched, the action-comedy which starred Amy Schumer and Goldie Hawn.

So, what could the storyline be for this new live-action film? Though not much other information has been released on the upcoming movie, here’s everything we know about the attraction, the 2003 film, and everything we are speculating as far as a possible plot!

Before finding out what possible storyline the upcoming film could follow, let’s take a look at what exactly the classic attraction is all about at the Disney Parks.

The Haunted Mansion is a popular attraction located in both the Magic Kingdom at Walt Disney World and inside Disneyland Park at Disneyland Resort. The popular dark theme park ride takes guests through a mansion of haunted characters while riding aboard a Doom Buggy.

As mentioned, spirited Haunted Mansion adventure is guided by the “disembodied voice of the Ghost Host” as he is your private tour guide “through the cadaverous realm of an eerie haunted estate, home to ghosts, ghouls and supernatural surprises.” Beware of hitchhiking ghosts!

As previously mentioned, in 2003 Disney brought us a live-action film based on the popular and classic Disney Parks attraction. However, this film did not receive the hype that the company expected. In fact, it received a ton of backlash.

The 2003 live-action movie is currently streaming on Disney+ so fans can catch up and watch the film before the new one comes out in the future. If you are not yet signed up for Disney+, you can get started here.

So, with all of this being said, what could the new live-action film be about? What storyline could it follow? Will we see the Ghost Host make an appearance? Or maybe even Constance Hatchway or Hatbox Ghost?

Though we don’t have these answers quite yet, we can expect the upcoming film to be much more like the Pirates of the Caribbean franchise rather than having it focus solely on comedy. With the upcoming Jungle Cruise live-action film, starring Dwayne “The Rock” Johnson and Emily Blunt, as well as a Space Mountain movie (which we also don’t know much about), it seems as though Disney is trying to really make a future with attraction-based films.

Well, The DisInsider previously reported that Disney has been trying to get a new Haunted Mansion film in the works for over 10 years. In fact, back in 2010, Hellboy director Guillermo Del Toro said he would be directing, writing, and producing the upcoming project. Additionally, Ryan Gosling, known for The Notebook and La La Land, was in talks to star in the movie.

As for what ghosts we would see, the live-action film was said to feature the now-iconic Hatbox Ghost, however, this was so long ago and so at this point, we really are unsure of what’s to come.

Haunted Mansion is currently being slated for a theatrical release, though it’s not yet clear if it will go to Disney+ instead.

Are you excited to see a new live-action Haunted Mansion movie in the works? What storyline do you think it will follow? Let us know in the comments below.