Do you have a favorite secret about the Haunted Mansion in Disney World? The recently revealed Haunted Mansion interactive queue features a spooktacular assortment of animated elements designed to allow Guests to stay entertained while waiting in the attraction’s line. The interactivity of some of the crypts is obvious, pressing instruments to hear their sounds or avoiding streams of water leaking from a sea-worthy sepulcher. But since the interactive queue first soft-opened on Monday, a puzzle featured on one of its new crypts has remained unsolved – until now. I will be your ghost host as we unlock the secrets of this attraction in the new interactive queue. The library crypt features two sides of stone books, pushing in and out on their own, appropriately arranged in groups of 13. (You can see them in action near the end of this video.) Most Guests passing these books find the need to push them back in as they pop out, with children finding extra joy in pounding on them, “Whac-a-Mole” style.

But inscribed on some of the books are a few sinister symbols that include a bust, an ax, a candlestick, a snake, and many more – 20 distinct symbols in all. Arranged in small groups with space between each, it becomes clear that these symbols are more than just decoration. In fact, they form a “cryptogram” (or is it “cryptogram”?) in which each symbol represents a letter of the alphabet, ultimately forming words and sentences.

With no key to the mystery offered, it is left up to Guests to figure out what each symbol means. It’s a daunting task when standing in person inside the new area, but after reviewing pictures of both sides of the library crypt, my wife and I have cracked the new Haunted Mansion code.

But I don’t want to spoil all the fun for you, so I will reveal the answer in stages below, allowing you to get as much or as little help as you’d like. First, I offer all 20 symbols, arranged in no particular order: 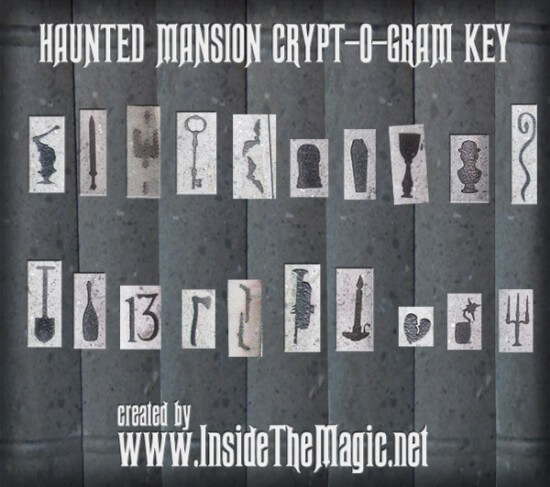 Can you figure out which symbol corresponds to which letter? It might help for you to see both sides of the library crypt (click to enlarge): 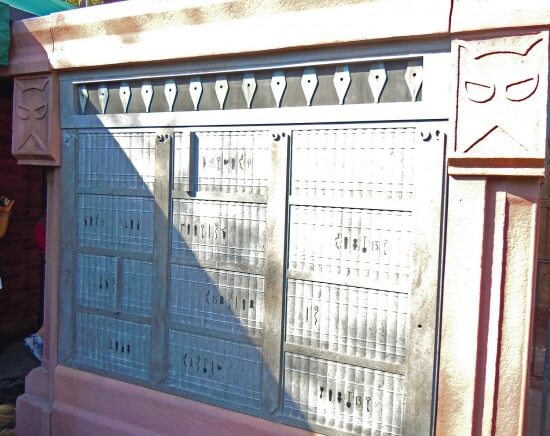 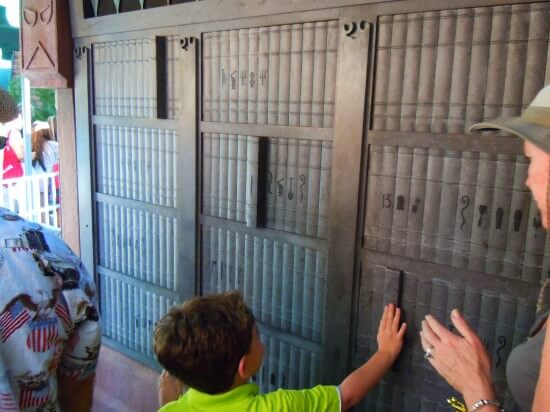 These, along with the wide-angle photo at the top of this article and a few from MouseSteps.com, were the best photos we had to work with while solving the puzzle. They were sufficient for us, so they should look for you as well.

If the photos above don’t help, but you’d like to solve the Haunted Mansion cryptogram by yourself in person, I’ve created a handy key that you can print and take with you to the Magic Kingdom, allowing you to decipher the code: 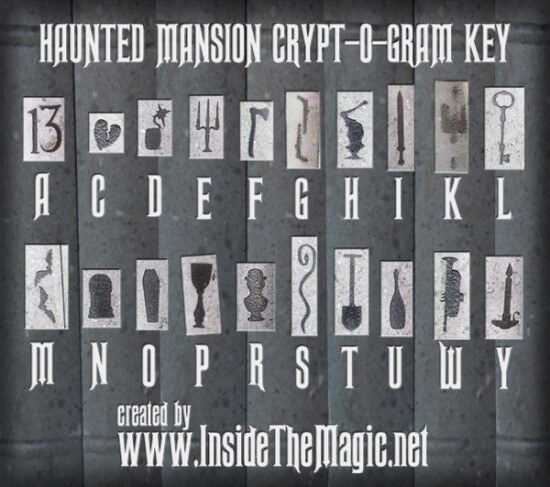 As you can see, not all letters of the alphabet are used in the encoded message, but each symbol clearly represents only one letter. Solving it from here should be pretty straightforward… and fun!

But if you’re not going to be at The Haunted Mansion any time soon and are dying to know what the message says, read on…

Needless to say, this section contains a major spoiler, offering the solution to the cryptogram, so read ONLY if you never plan on solving this puzzle on your own.

Using the key above, matching symbol to the letter, the message inscribed on the library crypt’s books is:

Welcome home you foolish mortal,
this mansion is your mystic portal,
where eerie sights and spooky sounds,
fill these happy haunting grounds.

Here are the letters overlaid onto the same photos above (click to enlarge): 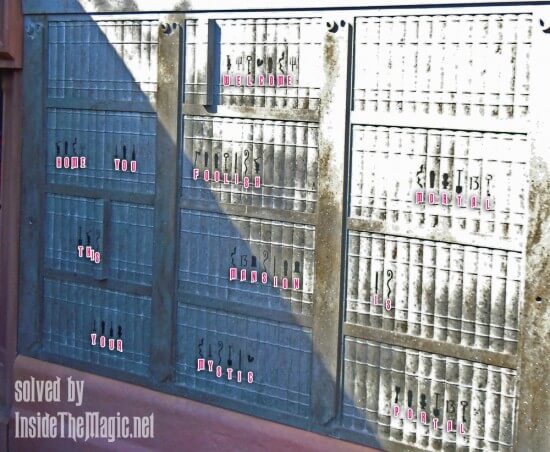 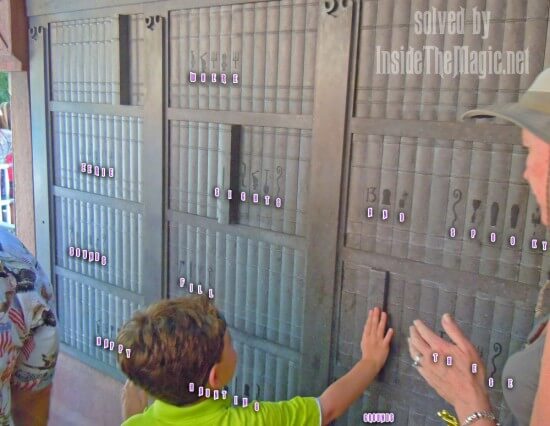 So how did we solve it using nothing but symbols? It all started with noticing that the series of symbols below had 3 of 5 letters the same, 2 of which were at the beginning. The only word I could think of that matched this pattern was “eerie”: 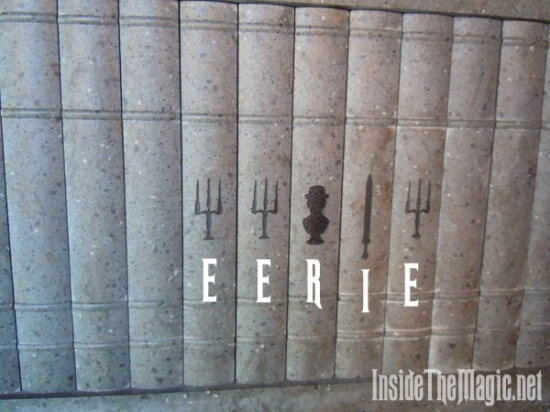 And it took off from there, using those letters as a base for deciphering the rest. Some were more obvious than others. (“Foolish” and “mortal” were bound to be in there somewhere.) Some of the symbols resemble the letters they represent (like a snake for “S”), while others seem to have no connection. But the task is done.

The new Haunted Mansion interactive queue features new tombs and crypts that are fun to look at and even interact with physically and further levels of interaction that require more than just pushing or pulling. The library crypt offers Guests a chance to solve a thinking puzzle, but first, they have to realize that what they’re looking at is even a puzzle at all and not just a random series of symbols. It’s not the first time Disney has featured a cryptogram in an attraction’s queue (the Indiana Jones Adventure at Disneyland has encrypted text throughout its long line). Still, it does show here that the new Haunted Mansion queue area does offer more than just music, water, and bubbles. It’s all part of an ongoing process for Disney to reinvent what it means to wait in line, beginning the fun of visiting an attraction before even stepping foot on the ride inside.

Will you play along next time you are waiting in line for the Haunted Mansion ride?