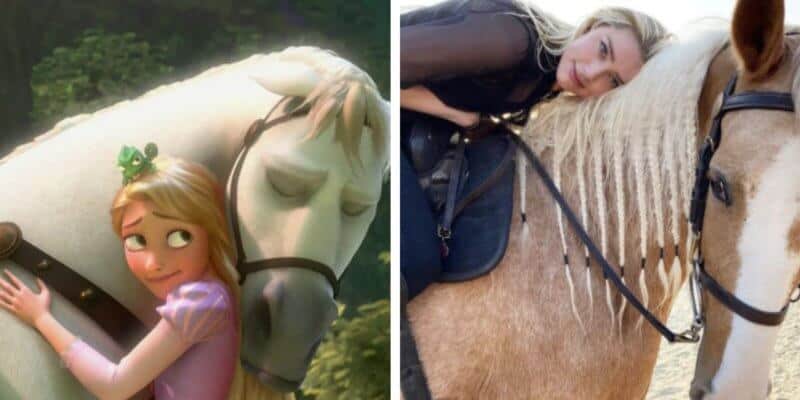 If there is a Disney star that has been in the spotlight lately, it is Johnny Depp. The Pirates of the Caribbean star who plays Captain Jack Sparrow has been in a $150 million legal battle against ex-wife Amber Heard (Aquaman). Out of the two, it is clear that Depp holds the title for the bigger Disney star, as he has played many iconic Disney roles such as the Mad Hatter in the live-action Alice in Wonderland (2010) and Alice Through the Looking Glass (2016). But now, it is rumored that Heard wants in on the Disney fandom action.

When Tangled (2010) came out, it was a smash hit. Holding a 90% on rotten tomatoes and grossing over $600 million at the box office, Disney fans couldn’t get enough from “the lost princess.” Disney has been on a roll lately pumping out live-action movies based on their animated hits such as Beauty and the Beast (2017), Aladdin (2019), Mulan (2020), and more coming down the pipeline, such as The Little Mermaid and Pinocchio. Now, it is rumored that Tangled could be the next live-action film — and that Amber Heard could be Rapunzel.

According to the rumor, which remains completely unconfirmed, it seems that the idea of Heard playing Rapunzel is something that is more the actress’s dream than Disney’s. Of course, anything can happen when it comes to casting — but for Amber Heard to be cast in any Disney film right now, never mind the lead of a fan-favorite — seems unlikely, given the circumstances.

As we briefly mentioned, Amber Heard has been entangled in a legal battle with actor Johnny Depp. Heard’s ex-husband Johnny Depp has taken quite the hit to his career due to this, and it is because of Depp’s fate, that we can assume Heard may experience something similar, though she has yet to be officially dropped from any projects.

The aforementioned libel case has turned into an intense legal battle that now has $150 million on the line after Depp’s counter lawsuit for defamation. Unfortunately for the Pirates actor, U.K. tabloid newspaper The Sun won their libel case when Depp sued for defamation, which set off a string of losses in terms of Depp’s career due to claims of domestic abuse.

Depp recently lost his role as Gellert Grindelwald in Warner Bros. Fantastic Beasts 3 (Mads Mikkelsen is currently set to take over Depp’s character in the Fantastic Beasts franchise). Disney then reportedly scrapped his return as Captain Jack Sparrow in Pirates of the Caribbean 6. Fan outrage quickly resulted in a petition to bring the actor back. Most recently, we wrote about an ongoing rumor that Disney is still in talks with Depp to reappear as Jack Sparrow based on a fan petition to bring the actor back to the franchise. This rumor began some time ago with a report that Disney would reconsider firing Depp from the Pirates franchise if he were to win a libel lawsuit retrial.

Finally, Margot Robbie has reportedly been cast as a female “Jack Sparrow”, in the sense that she will be the new captain of the franchise. The new Pirates of the Caribbean is set to be be female-centered, and Robbie stated that she wants her character to be apart of the LGBT community. Disney, however, has not confirmed anything about this. That being said, Depp has already admitted the Jack Sparrow was gay, so this really wouldn’t be anything new for the franchise.

Heard has actually involved Disney in the legal process of this case now, subpoenaing the company for information on Depp. According to Deadline, Heard’s lawyer team is looking to know, “’what really was going on with Mr. Depp during the ‘filming, including shooting and re-shooting, on Pirates of the Caribbean: Dead Men Tell No Tales.‘ They are also pressing for a February 18 virtual deposition from the House of Mouse on the matter.”

Amber Heard was seemingly set to lose her role in Aquaman 2, just as Depp had with his previous roles, but it has now been confirmed that she is set to reprise her role. That being said, considering Disney made the quick decision to cut Depp out, possibly due to the drama, it seems unlikely that they would rope themselves back in by casting Amber Heard as Rapunzel in a live-action Tangled.

As for Depp, it seems we will need to wait to see if he and Disney once again join forces, and how Depp’s lawyers will respond to the case. Depp also has a few other options and rumors circulating his next move. Some reports state that Johnny is looking to smaller production studios to get work, while others state that his pal Tim Burton is coming to the rescue. We do know that Depp is in talks to star as Gomez Addams in The Addams Family, Burton’s first television series.  Another project he is rumored to be part of is the long-awaited Beetlejuice 2, which Burton has repeatedly expressed interest in directing.

Who Do Fans Want to See in a Live-Action Tangled?

Looper.com reported that there are others rumored to play the golden-haired princess. Florence Pugh, Emily Browning, Amanda Seyfried, Sabrina Carpenter, and AnnaSophia Robb. Some fans would love to see Mandy Moore reprise the role, considering she is Rapunzel’s original voice actress.

Tom Holland (Spider-Man) has even been rumored to play Flynn Rider, but those rumors were quickly squashed after the actor said, “I really like that film. There’s a lot of these live-action versions of animated films that I loved as a kid and I’m like, ‘I don’t know if we need them.'” That doesn’t sound much like an actor who is ready to play a Disney prince — but you never know! At the moment, all casting is speculation.

There is no doubt that a live-action Tangled would do well. The film is highly popular among Disney fans, the music is great, and fans always love more versions of their favorite movie to consume. Amber Heard would also fit the profile of Rapunzel very well. Although a little older for the teenage role, she is a blonde beauty who would just need to add a few more locks to her hair. She also has an impressive resume, much like other actors who have taken on the lead role of a live-action princess such as Emma Watson playing Belle in Beauty and the Beast, and Halle Bailey who will play Ariel in The Little Mermaid.

After seeing how Disney is transforming all of their animated films into live-action, it seems it will only be a matter of time for Tangled to come about. That being said, Disney has not said that a live-action Tangled will be released anytime soon, and there are many other live-actions in the pipeline before we are likely to hear anything about this.

Stay tuned to Inside the Magic as we continue to update you on every Disney live-action film being made, as well as keep you updated on the drama regarding Mr. Depp and Ms. Heard.

Do you think Amber Heard would be a good Rapunzel? Who would be your ideal cast in a live-action Tangled movie?