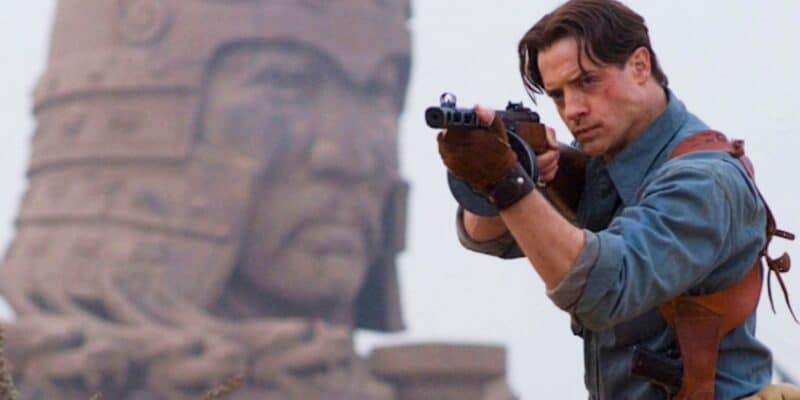 Whales, Mummies, and Stuntmen- oh my! Our favorite guy, Brendan Fraser, is back. After a break from Hollywood, Brendan Fraser is once again on the silver screen.

His newest movie, ‘The Whale’ , is currently in select theaters and will be released nationwide on December 21.

In the movie, Brendan Fraser stars as Charlie, a reclusive English teacher living with severe obesity. Throughout the movie, he is trying to reconnect with his estranged daughter Ellie, played by Sadie Sink (‘Stranger Things’).

‘The Whale’ is based on the play of the same name by Samuel D. Hunter. Earlier this month, Hunter, who also wrote the film’s screenplay, told “Good Morning America” that the movie took 10 years to make. He also said that the story is about “hard-won hope.”

While we all wait for Fraser’s highly anticipated movie, here are our top ten favorite Brendan Fraser movies (in no particular order).

The Mummy is a 1999 action-adventure horror film directed by Stephen Sommers and starring Brendan Fraser, Rachel Weisz, and Arnold Vosloo. The film is about an ancient Egyptian princess named Imhotep who is resurrected and unleashes a curse on those who disturbed his tomb.

The story begins in Egypt in the 1920s, where a group of treasure hunters led by Rick O’Connell (Brendan Fraser) discovers the lost city of Hamunaptra and the tomb of Imhotep (Arnold Vosloo). They accidentally awaken Imhotep, who was cursed and buried alive for attempting to revive his lover, the princess Anck-su-Namun, using the Book of the Dead.

Related: Brendan Fraser Open to Returning for Next ‘Mummy’ Movie

Imhotep escapes from his tomb and begins to search for the Book of the Dead, which he needs to fully resurrect Anck-su-Namun. He is pursued by Rick and his group, who are aided by a librarian named Evelyn Carnahan (Rachel Weisz) and her brother Jonathan (John Hannah).

As Imhotep’s powers grow, he unleashes a series of plagues on the city of Cairo and begins to transform into a monstrous creature. Rick and his group must stop Imhotep and prevent him from using the Book of the Dead to bring Anck-su-Namun back to life.

Encino Man is a 1992 comedy film directed by Les Mayfield and starring Brendan Fraser, Sean Astin, and Pauly Shore. The film is about a pair of high school friends, Dave (Sean Astin) and Stoney (Pauly Shore), who discover a frozen caveman (Brendan Fraser) in the backyard of Dave’s house.

Dave and Stoney decide to thaw out the caveman, whom they name Link, and introduce him to modern society. They enroll him in their high school and try to help him fit in, but Link’s primitive ways and lack of understanding of modern culture often get them into trouble.

George of the Jungle is a 1997 live-action comedy film based on the animated television series of the same name. The film was directed by Sam Weisman and stars Brendan Fraser as the titular character, a jungle-dwelling man raised by apes who must navigate the dangers of the jungle and the complexities of the modern world.

The film begins with a group of tourists, including heiress Ursula Stanhope (Leslie Mann), searching for a rare “white ape” in the African jungle. They come across George (Brendan Fraser), a strong and agile man who has spent his entire life living in the jungle and learning how to survive among the animals.

George is immediately smitten with Ursula. He follows her back to San Francisco, where he is introduced to the modern world and struggles to adapt to its many unfamiliar customs and technologies.

Looney Tunes: Back in Action is a 2003 live-action/animated comedy film directed by Joe Dante and starring Brendan Fraser, Jenna Elfman, and Steve Martin.

The film follows Daffy Duck (voiced by Joe Alaskey), who is fed up with playing second fiddle to Bugs Bunny (voiced by Jeff Glenn Bennett) and decides to quit showbiz. He and a down-on-his-luck stuntman named DJ (Brendan Fraser), discover his superstar father Damien Drake (Timothy Dalton) is actually a secret agent.

Together, they embark on a globe-trotting adventure to locate the Blue Monkey, and save DJ’s father from the evil Mr. Chairman (Steve Martin) and his organization.

Dudley Do-Right is a 1999 comedy film based on the animated television series The Rocky and Bullwinkle Show. The film was directed by Hugh Wilson and stars Brendan Fraser as Dudley Do-Right, a bumbling Canadian Mountie who must save his town from the clutches of the evil Snidely Whiplash (Alfred Molina).

Dudley Do-Right, a dim-witted but well-intentioned Mountie, is tasked with protecting the town, and he is aided by his trusty horse, Horse. While he is busy keeping the peace in his small mountain town, his old rival, Snidely Whiplash, comes up with a plot to buy all the property in town, then start a phony gold rush by seeding the river with nuggets

The two men compete for Nell’s (Sarah Jessica Parker) affections, leading to a series of comedic misunderstandings and mishaps.

Monkeybone is a 2001 fantasy-comedy film directed by Henry Selick and starring Brendan Fraser, Bridget Fonda, and Chris Kattan. The film is about a young cartoonist named Stu Miley (Brendan Fraser) who, after a near-fatal car accident, finds himself trapped in a wacky underworld called Down Town where he must confront his own creativity and find a way back to the real world.

Stu is the creator of a popular cartoon character named Monkeybone, a mischievous monkey who often causes chaos in Stu’s cartoons. When Stu falls into a coma after his car accident, Monkeybone escapes from the cartoon world and takes control of Stu’s body in the real world.

As Stu tries to regain control of his body and find a way back to the real world, he is aided by a quirky group of characters, including a love interest named Julie (Bridget Fonda) and a mischievous inventor named Hypnos (Chris Kattan).

Airheads is a 1994 comedy film directed by Michael Lehmann and starring Brendan Fraser, Steve Buscemi, Chris Farley, Ernie Hudson, and Adam Sandler. The film is about a struggling rock band called The Lone Rangers who, after being repeatedly rejected by record labels, decide to take extreme measures to get their music heard.

The Lone Rangers are made up of Chazz (Brendan Fraser), a guitarist and vocalist; Pip (Adam Sandler), a drummer; and Rex (Steve Buscemi), a bassist. Desperate to get their demo tape played on the radio, they hatch a plan to hold a radio station hostage and force the DJ to play their music.

However, things don’t go as planned and the band finds themselves in over their heads as the situation escalates and they are pursued by the police. Along the way, they encounter a variety of quirky characters, including a sympathetic police officer (Chris Farley) and a ruthless music executive (Michael McKean).

Journey to the Center of the Earth is a 2008 action-adventure film directed by Eric Brevig and starring Brendan Fraser, Josh Hutcherson, and Anita Briem. The film is based on the 1864 novel of the same name by Jules Verne.

The film begins with Trevor Anderson (Brendan Fraser), a geologist who is grieving the loss of his brother, who had disappeared while searching for the center of the earth. Trevor is joined by his nephew Sean (Josh Hutcherson) and a mountain guide named Hannah (Anita Briem) as they set off on a journey to the center of the Earth using an ancient map.

As they journey deeper into the earth, the trio encounters a variety of obstacles and dangers, including man-eating plants, glowing birds, and dinosaurs.

Blast from the Past is a 1999 romantic comedy film directed by Hugh Wilson and starring Brendan Fraser, Alicia Silverstone, and Christopher Walken. The film is about a man named Adam (Brendan Fraser) who has spent his entire life living in a bomb shelter with his eccentric parents (Christopher Walken and Sissy Spacek) after his father becomes convinced that the world is about to end due to a Soviet Nuclear attack.

After 35 years in the shelter, Adam emerges into the modern world and is taken in by his brother (Dave Foley) and his family. He meets a young woman named Eve (Alicia Silverstone) and is immediately smitten with her, but struggles to adapt to the many changes that have occurred in the world since he was last outside.

Inkheart is a 2008 fantasy adventure film directed by Iain Softley and starring Brendan Fraser, Helen Mirren, Eliza Bennett, and Paul Bettany. The film is based on the 2003 novel of the same name by Cornelia Funke and follows a young girl named Meggie (Eliza Bennett) who discovers that her father, Mo (Brendan Fraser), has the ability to bring characters from books to life by reading aloud.

Mo is a “Silvertongue,” a rare person who has the power to bring characters to life through the power of reading. However, this power also has a dangerous side effect: whenever a character is brought to life, someone else disappears into the book.

Mo has tried to keep his ability a secret, but he is pursued by a group of villains who are determined to use his power for their own gain. When Meggie’s mother (Sienna Guillory) is taken from the real world and trapped in a book, Mo and Meggie set out on a journey to rescue her and stop the villains from using Mo’s power to unleash chaos on the world.

Now and Then is a 1995 coming-of-age comedy-drama film directed by Lesli Linka Glatter and starring Christina Ricci, Melanie Griffith, Demi Moore, Rosie O’Donnell, and Thora Birch. The film is about four childhood friends – Roberta (Rosie O’Donnell/Christina Ricci), Teeny (Melanie Griffith/Thora Birch), Samantha (Demi Moore/Gaby Hoffman), and Chrissy (Rita Wilson/Ashleigh Aston Moore) – who reunite as adults and reminisce about their summer together in 1970, when they were 12 years old.

The film alternates between the present day, where the four friends are dealing with the challenges of adulthood, and the summer of 1970, where they spend their days exploring the woods, playing pranks, and dealing with the ups and downs of growing up.

What is your favorite Brendan Fraser movie? Let us know in the comments.