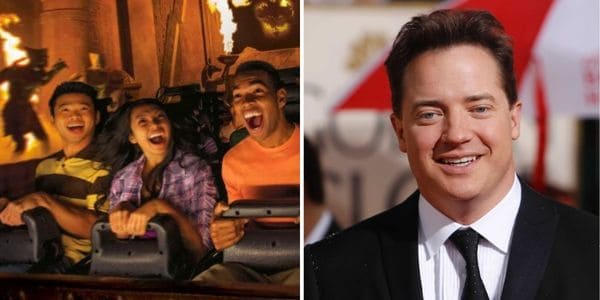 When riding Revenge of the Mummy at Universal Studios in Orlando, it’s hard to choose a favorite moment of the thrilling attraction. From creepy insects to the scary Imhotep, the ride is jam-packed with memorable moments.

But perhaps the most memorable comes at the very end of the ride.

As you’re making your way back to the unloading station, you see Brendan Fraser (Rick O’ Connell) in his interview chair. Frase (O’ Connell) passionately says the following:

“Hey, welcome back. I hope you enjoyed yourself. I would’ve enjoyed this interview more if I HAD GOTTEN MY CUP OF COFFEE!”

Imhotep, of course, is happy to make the delivery, and as his shadow falls over Fraser, the screen cuts to black, and we hear the iconic music from The Mummy (1999) franchise play over, clapping as we exit the ride vehicle.

However, with Universal confirming earlier this year that the dark coaster was set for a lengthy closure, many were worried Brendan Fraser would not make it past the refurbishment. The attraction has been listed to open “late this summer,” with still no word on when it will return as of August 10, 2022.

It wouldn’t be the most shocking decision for Universal to makle, as CinemaBlend writes:

There are certainly some reasons to potentially consider updating the ride’s story. The video component is shown in standard definition video, and so it shows the age of the attraction, which opened in 2004, probably more than anything. That and the fact that the Brendan Fraser Mummy franchise hasn’t seen a new entry since 2008.

However, one eagle-eyed Guest spotted Brendan Fraser still on the TVs inside the attraction building, hopefully indicating he is here to stay:

this is comforting. from UniversalOrlando

We are also comforted to know that Brendan Fraser is seemingly still part of the ride. We also can’t wait for this crucial experience to return to the Universal Studios Resort in Orlando and hope to see it reopen soon.

Have you missed this attraction?