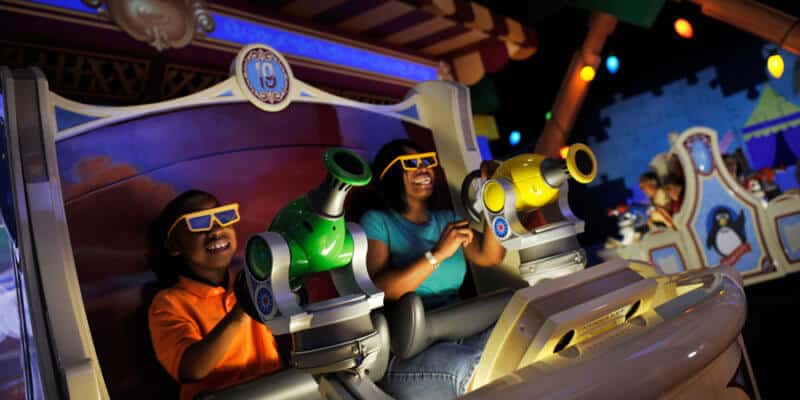 Few attractions offer as unique of an experience as Toy Story Mania at Disneyland. Located specifically in Disneyland California Adventure, this attraction is not only a fun ride but an engaging video-game experience where Guests can compete against others for the top score.

This could be Disneyland’s most interactive attraction in the entire Resort. At Toy Story Mania, Guests can “Grab your Spring-Action Launcher and shoot at moving objects with virtual darts, baseballs, eggs and other toy-jectiles. It’s a fast-paced, spinning trip around Andy’s room, complete with Toy Story friends Hamm, Rex, Trixie, Buzz Lightyear, Woody, Jessie and more.”

The ride is a lot less interactive when it breaks down, however, and according to several Guest reports, the ride has been going through a rough patch. We previously covered how the ride kept giving Guests an error message that instructed them to “activate Windows,” and it seems like this issue hasn’t been fixed by Disney just yet as shown in a post on Reddit:

Maybe this is why Toy Story keeps breaking down…

Maybe this is why Toy Story keeps breaking down… from Disneyland

The Guest goes on to say, “Yesterday, 8/8/2022 Toy Story at DCA kept breaking down and I was stuck looking at this screen. As you can see it has an old version of Windows that is both not activated and like over a decade old…flashing a 2018 date. 😳 Woah.”

We aren’t exactly sure what causes this message to show up on the screen during the ride, but we hope this issue gets fixed soon as Toy Story Mania is not just one of Disneyland’s most popular rides, but one of the most popular Disney Park rides in general. Along with Disneyland and Walt Disney World, the attraction can also be found at the Tokyo Disney Resort.

For tips on the attraction, check below!

Points pile up when you hit your mark. As any good cowpoke knows, hard-to-hit targets are worth more. Hit secret targets to unleash “Easter eggs” worth even more points!

Have you encountered this issue?