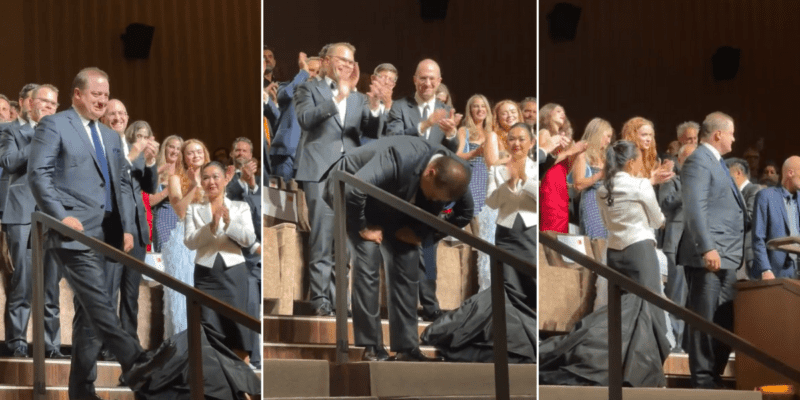 A beloved actor was moved to tears after his latest movie received a six-minute standing ovation during its premiere at the Venice Film Festival. We could not be more emotional after watching the scene.

After the shocking scene at this year’s Venice Film Festival after the world premiere of The Whale (2022), it is more than clear that the Hollywood return of the beloved actor Brendan Fraser will come flooded with cheers and even some tears. During the six-minute standing ovation of the latest Darren Aronofsky film, Brendan Fraser was moved to tears, with the actor showing joy and extreme gratitude.

Related: Brendan Fraser Could Be Returning For New ‘Mummy’ Movie

Variety’s Co-Editor-in-Chief, Ramin Setoodeh (@RaminSetoodeh), shared a video of the emotional scene on Twitter, and it still makes us tear up a little when we watch it.

Brendan Fraser is back — and he sobbed during the #Venezia79 six-minute standing ovation for #TheWhale.

Brendan Fraser is back — and he sobbed during the #Venezia79 six-minute standing ovation for #TheWhale. pic.twitter.com/y4l10ZFWQa

Fraser’s co-stars and Director Darren Aronofsky motivated him to stand up and embrace the massive appreciation the audience was showing towards the film and the actor, always showing a lot of emotion on his face and extreme gratitude towards the audience and his team.

Fraser hugged Aronofsky several times during the ovation. He tried to leave the theater at some point. However, the deafening acclamation wouldn’t allow him to, so Fraser took a bow and continued to be in the center of the massive ovation with great humor, showing humility and genuine gratitude during this overwhelming scene.

Ramin Setoodeh (@RaminSetoodeh) shared a video of this moment as well.

The standing ovation for #TheWhale was so enthusiastic, Brendan Fraser tried to leave the theater but the crowd’s applause made him stay. #Venezia79

The standing ovation for #TheWhale was so enthusiastic, Brendan Fraser tried to leave the theater but the crowd’s applause made him stay. #Venezia79 pic.twitter.com/ZZ0vbFX7Rl

Brendan Fraser’s role in The Whale depicts a man living with severe obesity who struggles to reconnect with his 17-year-old daughter, played by Sadie Sink, who debuted in Netflix’s Stranger Things. The supporting cast includes Hong Chau, Samantha Morton, and Ty Simpkins. The movie is based on the play of the same name by Samuel D. Hunter, who adapted the stage script into Aronofsky’s feature.

Brendan Fraser had a prolific career in the ’90s and early 2000s, starring in Disney’s George of the Jungle (1997) and Universal’s The Mummy franchise, even making an appearance on the popular attraction Revenge of the Mummy in Universal Studios Florida, proving the actor could play any role from comedy to action and drama. Fraser also starred in Bedazzled (2000), Journey to the Center of the Earth (2008), Looney Tunes: Back in Action (2003), and even in DC Comics’ Doom Patrol (2019), among many other films and series.

Seeing the actor return with such an impressive acclamation is heartwarming, and surely Fraser’s fans will continue to show their support and appreciation towards the actor.

Are you a fan of Brendan Fraser’s work? Will you be watching The Whale when it is released in theaters? Let us know in the comments below!