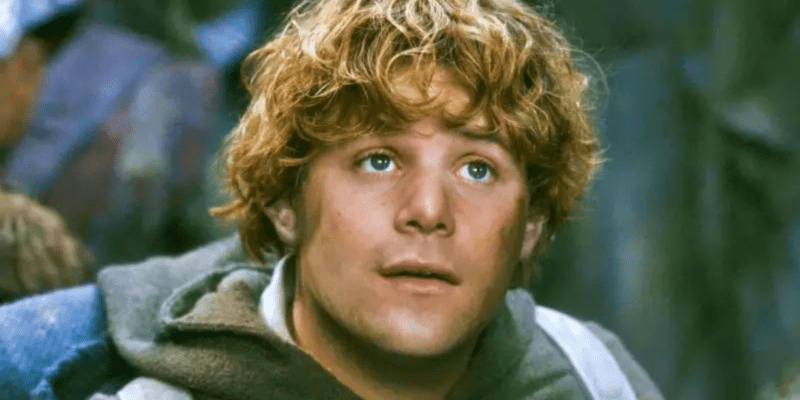 J.R.R. Tolkien’s The Lord of the Rings contains countless heroes and villains, many of which fans don’t even realize exist. From the revolutionary Rings trilogy by Peter Jackson to Tolkien’s classic novels, every Middle Earth fan wants to know the most about their favorite character, especially when they’re often considered the true “hero” of Tolkien’s universe.

Undoubtedly one of the most beloved and hilarious Middle Earth and The Lord of the Rings character, Samwise Gamgee (Sean Astin), is one of the most critical figures in Tolkien’s beloved story.

From literally carrying Frodo Baggins upon his back towards the entrance of Mount Doom in Mordor to destroy the One Ring to bravely fend off the evil Gollum while traversing the dark realms of Middle Earth, Samwise Gamgee carried the heaviest load out of the Fellowship.

Now, let’s take a closer look at who exactly this character is.

After dropping some eaves on the night of Bilbo Baggins’ 111th birthday, Gandalf the Grey enlists the Shire gardener to be the personal escort and protector of Frodo Baggins as the two hobbits travel to Rivendell with the One Ring.

The young hobbit comes from simple beginnings that ultimately build one of the most significant characters out of Tolkien’s catalog:

Sam was the youngest son of Hamfast and Bell Gamgee, and had many brothers and sisters. A gardener by trade, Sam seemed to be a simple Hobbit of plain speech. However, his love for Elves, his gift for poetry, and his belief that the world contained greater wonders than most hobbits were aware of (all nurtured by his tutor Bilbo Baggins) set him apart from the beginning. It was Sam who first introduced (in J.R.R. Tolkien’s novels) the theme of the Elves sailing from Middle-earth, a subtle foreshadowing of Bilbo and Frodo’s final journey across the sea from the Grey Havens. He lived with his father, Hamfast Gamgee, known commonly as “The Gaffer”, on Bagshot Row in the Shire, close to Bag End. He had five siblings: Hamson, Halfred, Daisy, May, and Marigold.

The Lord of the Rings wiki continues:

As “punishment” for eavesdropping on Gandalf’s conversation with Frodo regarding the dangers of the One Ring, Gandalf chose Sam to be Frodo’s companion on his journey to Rivendell. Sam saved Frodo’s life more than once during the quest to destroy the Ring, and would accompany him all the way to Mount Doom.

From Rivendell, Samwise Gamgee never leaves the side of Frodo Baggins, even when Frodo attempts to leave the Fellowship and traverses his way to Mount Doom and Mordor on his own. Countlessly risking his life against the forces of Orcs and the deadly Shelob spider-beast, Gamgee only grows in honor and integrity as their journey nears its end.

When Orcs took Frodo’s body, Sam overheard one of them saying that Frodo was still alive, so he followed them into the Tower of Cirith Ungol, determined to rescue Frodo. Once there he found that competing bands of Uruks and Morgul Orcs had rioted and killed one another over the possession of Frodo’s mithril coat, thus making it easier for Sam to get to Frodo and escape the tower with him.

Sam and Frodo made their way to Mount Doom, disguised as Orcs along the way. The way to Mount Doom was filled with fiery rocks and pillows of ash which made it almost impossible for the hobbits to pass. When Frodo collapsed from weakness, Sam carried him up the slopes of Mount Doom, only to be stopped by Gollum. Sam delayed Gollum while Frodo continued towards the Cracks of Doom. Sam then rushed to follow Frodo, only to see Frodo renounce the quest and claim the Ring as his own, putting it on his finger. Unbeknownst to Sam, Gollum had followed in his tracks, and attacked him from behind. In the moments while Sam was dazed, Gollum attacked Frodo, and after a brief struggle took the Ring by force by biting off Frodo’s finger. Gollum began to celebrate regaining the Ring, but in doing so slipped and fell to his death in the fiery chasm below, destroying the Ring in the process.

Did the One Ring Corrupt Sam

While J.R.R. Tolkien never explicitly details the possible temptations Samwise encountered to take the Ring for his own, especially when slipping it off the body of Frodo when the young hobbit believes his friend died at the stinger of Shelob, Gamgee throughout the novelization and Peter Jackson’s Rings trilogy appears to stay true to himself and the Fellowship, much like Aragorn.

Sam stayed loyal to Frodo Baggins until the end, even to potentially dying at the base of Mount Doom after destroying the Ring of Sauron.

After the Scouring of the Shire (only present in the novelization), Samwise Gamgee married Rosie Cotton and began a family in the Shire:

Following the Scouring of the Shire, Sam married Rose (Rosie) Cotton. They had thirteen children: Elanor the Fair, Frodo, Rose, Merry, Pippin, Goldilocks, Hamfast, Daisy, Primrose, Bilbo, Ruby, Robin, and Tolman. When Frodo Baggins announced that he was leaving to the Undying Lands, west of Middle-earth, he gave Sam the Red Book of Westmarch and Bag End where he and his large personal family, later called the Gardners, would live for many years. After Will Whitfoot resigned his post as Mayor of Michel Delving, in SR 1427, Sam was elected Mayor of the Shire for seven consecutive seven-year terms.

After his wife died in the year 61 of the Fourth Age (SR 1482), Sam entrusted the Red Book to his daughter, Elanor, and left the Shire. It was a tradition handed down from Elanor that he went to the Grey Havens, and because he was also a Ring-bearer (albeit for a short time), he was allowed to pass over the Sea to be reunited with Frodo in the Undying Lands.

Samwise would forever be remembered as one of the greatest heroes of Middle Earth and the War of the Ring, as well as one of Tolkien’s crowning achievements for character creation and more.

Taking place in the episodic Second Age of Middle Earth, Amazon’s The Lord of the Rings: The Rings of Power chronicles the construction of the One Ring worn by the evil Sauron under Mount Doom:

The near $1 billion series is set to focus on the rise of the Sauron, the historic alliance between Elves and Men (that transcended the entire franchise), the island of Númenor/Westernesse, as well as a look into Khazad‐dûm/Moria before the dwarven kingdom fell to hoards of goblins and the deadly Balrog/Durin’s Bane.