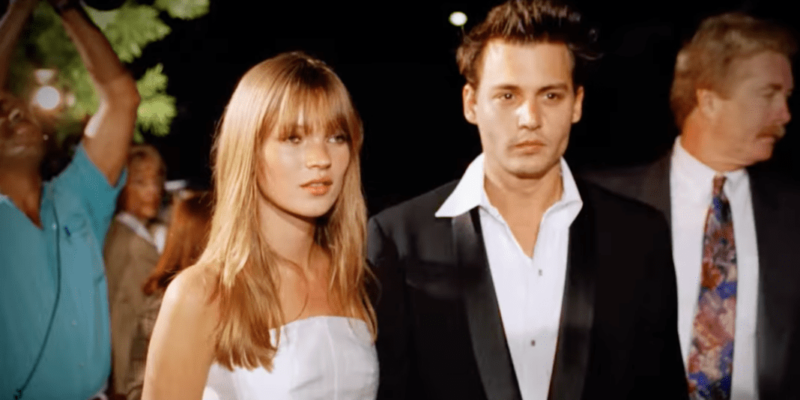 Pirates of the Caribbean actor Johnny Depp and supermodel Kate Moss dated between 1994 and 1998 and have remained supportive of one another even after the breakup.

In fact, Kate Moss testified during the Johnny Depp vs Amber Heard defamation trial via video to go n the record and say Depp never pushed her down the stairs — a rumor that has been circulating for years and that Amber Heard tried to use in her defense while on the stand.

Kate Moss recently reviewed some of her famous looks with Vogue, where they discussed some of the diamonds she wore. In fact, they were her first diamonds she ever owned and gifted by Johnny Depp.

When discussing what she wore to the 1995 CFDA Fashion Awards — a white John Galliano dress along with a diamond necklace, she recalled how exactly she got those diamonds, which was not gifted in a pretty box with a bow.

“That diamond necklace Johnny gave me,” Moss said. “They were the first diamonds I ever owned.”

“He pulled them out of the crack of his a**,” she continued. “We were going out for dinner and he said, ‘I’ve got something in my bum,'” demonstrating how he put his hand into the back of his pants. “‘Can you have a look?’ I was like: ‘What?’ I put my hand down his trousers and I pulled out a diamond necklace. That diamond necklace.”

Johnny Depp recently sued his ex-wife Amber Heard for defamation after she wrote an Op-Ed for The Washington Post, where she referred to herself as a “public figure representing domestic abuse.” Ms. Heard countersued Mr. Depp, claiming that he “defamed her when his former lawyer released statements saying her allegations of abuse were a hoax.”

While Ms. Heard was on the stand, she brought up the alleged Kate Moss and staircase incident, which opened the door to allow Mr. Depp’s team to call Kate Moss to the stand.

The supermodel dated Mr. Depp between 1994 and 1998 and was allowed to testify to help Mr. Depp’s case because Ms. Heard mentioned her name while on the stand during her testimony earlier this month.

During the Aquaman actress’s testimony, Heard brought up a 2015 altercation between her younger sister, Whitney Heard, and Mr. Depp. Heard explained that her sister was standing at the top of the stairs when Depp approached and allegedly swung at her, which she then proceeded to talk about the rumored incident that Johnny Depp once pushed Kate Moss down a flight of stairs.

Because Heard referenced Moss on the stand, Depp was allowed to call the supermodel to testify, which arguably helped his case tremendously.

Kate Moss testified via video as a rebuttal witness on Wednesday, May 25. 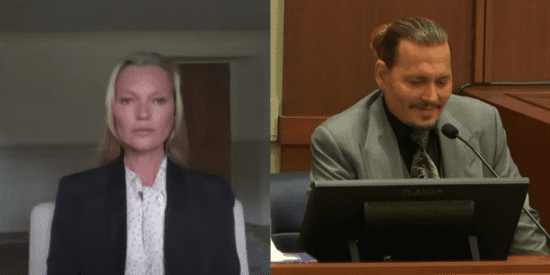 Are you a fan of Johnny Depp? Let us know in the comments below.