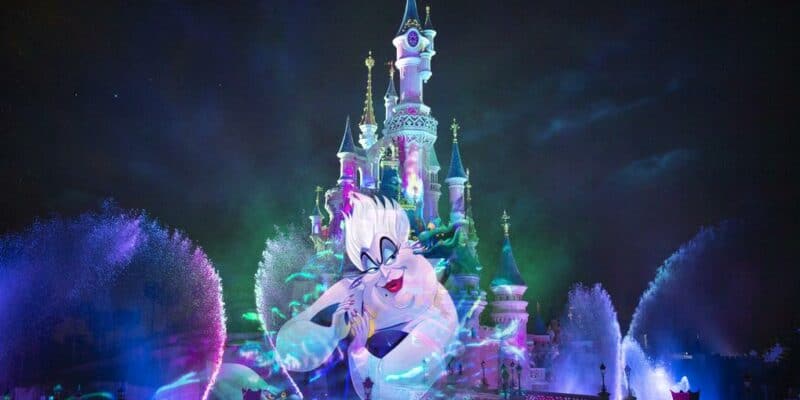 As summer slowly fades away and the Halloween season closes in, Disney fans are eager to feel the spooky spirit taking over the Parks around the world. With Oogie Boogie Bash at Disney California Adventure in Disneyland Resort, Mickey’s Not So Scary Halloween Party at Magic Kingdom in Walt Disney World, and even “Disney Halloween” returning to Tokyo Disney Resort this year, there is so much to look forward to this Halloween!

And, of course, Disneyland Paris will not be the exception, as the Halloween Festival is coming to the Parisian Park very soon! Are you ready to see Disney Villains taking over the Park?

Does Disneyland Paris have a Halloween Celebration?

Disneyland Paris joins Disney Parks worldwide in celebrating Halloween at the Park with seasonal decorations that adorn the Park from Main Street U.S.A. to Sleeping Beauty Castle, including smiling pumpkins, garlands with lights, lanterns, friendly spooks, and joyful skeletons that are up to 3 meters high! Plus, make sure you sneak across to Frontierland for a vibrant Mexican festival complete with live music and prancing dancing skeletons! Guests will also be immersed in the Halloween spirit in Disney Hotels, as they will be adorned with fall decorations for the very first time.

What date does Halloween start at Disneyland Paris?

After patiently waiting for several months, Disney Villains will finally come out of the shadows to take over Disneyland Paris’ 30th Anniversary celebrations. Their spooktacular takeover will begin on October 1, 2022, and continue through November 6, 2022.

Disney Halloween Parties bewitch Disneyland Park on 29 and 31 October 2022 until 2am!​
​
Disney Villains are back! Enjoy access to attractions until 2am, an exclusive parade, wickedly festive entertainment and much more. Don’t miss the most spooktacular night of the year. It’s the best of the bad!​

The magic takes a bewitching turn as Disney Villains roam the streets of Disneyland Park amid a mist of spooky fun!

Navigate with family or friends through thrilling, mysterious and monstrously fun atmospheres, where activities tinged with mystery and bewitching surprises await.​

​And for the brave, will you dare to explore an island invaded by pirate zombies in Adventureland? ​

Do you need a separate ticket for Halloween at Disneyland Paris?

Guests visiting Disneyland Paris can enjoy all the spellbinding encounters, mischievous atmosphere, terrifyingly-fun shows, and attractions that will haunt the Parisian Park without a need for a separate ticket, meaning more Guests can enjoy the spooktastic offerings at Disneyland Paris this Halloween season. You can click here to check the Park’s operating hours during the Halloween season to have the latest information when planning your trip.

However, Guests who want to experience the two Disney Halloween Parties that will take place at Disneyland Park on October 29 and 31 must purchase a separate ticket, as these parties are exclusive events. Purchasing a ticket for these special events will allow Guests to enjoy access to the Park during the hours of the event, from 9 pm to 2 am, with early access starting at 6 pm for those with valid tickets to this special evening.

How much are Halloween tickets at Disneyland Paris?

Tickets for this year’s Disney Halloween Parties will be priced as follows, per Disneyland Paris’ website:

Tickets are priced equally for children (ages 3-11) and adults (ages 12 and up).  You can click here to check availability and purchase your tickets for the exclusive Disney Halloween Parties.

Can you dress up for Halloween at Disneyland Paris?

Disneyland Paris follows Disney Parks’ dress code, which restricts Guests 14 years of age or older from wearing costumes. This policy includes the Halloween season at the Parks, meaning adults may not wear costumes to Disneyland Paris during regular operating days.

However, Guests can wear their favorite costumes to the Disney Halloween Parties that will take place on October 29 and 31, as long as they have a valid ticket for these special events.

Are attractions open during Halloween celebrations?

All available attractions remain open during the Halloween Festival at Disneyland Paris. Guests of all ages can test their courage in the different attractions at the Park, such as Blanche-Neige et les Sept Nains, Alice’s Curious Labyrinth, and La Tanière du Dragon for the youngest Guests, Phantom Manor for the entire family, and the infamous Twilight Zone Tower of Terror for the bravest thrill seekers in the family.

During the two Disney Halloween Parties that will take place this year on October 29 and 31, Guests can enjoy a selection of attractions that will remain open until 2 am, including Phantom Manor, Big Thunder Mountain, and Pirates of the Caribbean.

What are the entertainment offerings during Halloween?

This year, Mickey’s Halloween Celebration will return triumphantly after a two-year absence. Disneyland Paris describes this spooktacular cavalcade as follows:

Related: Beloved Disney Parade to Be Replaced Until Next Year

This year, at nightfall, Disney Villains will have one last mesmerizing surprise in store for Guests: Nightfall with Disney Villains, which will take place before Disney D-Light – the 30th Anniversary celebration’s successful preshow that includes a drone display and Disney Illuminations. Their devious plan will consist of coming out of the shadows and temporarily take over Sleeping Beauty Castle, during a dancing fountain display combined with projections.

Related: A Significant Improvement Is Coming to This Disneyland Paris Nighttime Spectacular

Guests will also be able to meet their favorite Disney characters dressed for the occasion in their bewitching best outfits. Per Disneyland Paris’ website:

Put on your most menacing smile and show your fangs for a BOOtiful selfie! Disney Characters dressed in their most wickedly colourful Halloween costumes are waiting to share a spooky moment with you throughout the Parks. Mickey & Minnie, Donald & Daisy, Goofy… who will you be lucky enough to meet for yours?

And. of course, Guests will also be able to meet Captain Hook, Cruella de Vil, Maleficent, and the Queen of Hearts, among others, who will be sneaking around, waiting for Guests to conjure up the courage to approach them – if they dare! Per Disneyland Paris’s website:

Disney Villains always have more than one prank to pull on Guests… who dare to meet them! Plus, it just so happens that this year, the Royal Castle Stage will become the Disney Villains’ regular haunt. They will use this location to put themselves in the limelight for better… or for laughs! After making a noticeable appearance on stage, they will meet and interact with Guests.

Does the Park offer special merchandise?

Guests can stock up on ghoulish gifts as miraculous mementos from their trip, as the shops throughout Disneyland Paris will have a wide range of exclusive souvenirs dedicated to Mickey and his Friends, Disney Villains, and Tim Burton’s The Nightmare Before Christmas available.

Are there special dining options for this event?

Yes! Guests can indulge with some delicious Halloween-themed treats for the most monstrous of appetites throughout the Park’s restaurants. From scary seasonal snacks to special potions to quench a devilish thirst, the Halloween Festival at Disneyland Paris will have all the tricks and treats Guests could wish for! Disneyland Paris describes some of these offerings as follows:

Guests of all ages will also be able to fill their gr-h-owling stomach by tasting mouthwatering new treats, including the Wicked Whip, a surprising cone, an incredible Maleficent Sundae at the Lucky Nugget, a “Mickey Mummy” lollipop and many other products! Fang-tastic beverages will also be added to select bar and restaurant menus, including the Little Devil Cocktail*, the Poisoned “Apple”* and the Oogie Boogie mocktail.

But that’s not all. There is still a witch’s hatful of surprises for Guests to discover in the Parks. Can’t wait to visit Disneyland Paris this Halloween season? Neither can we!

Will you visit Disneyland Paris this Halloween season? Let us know in the comments below!