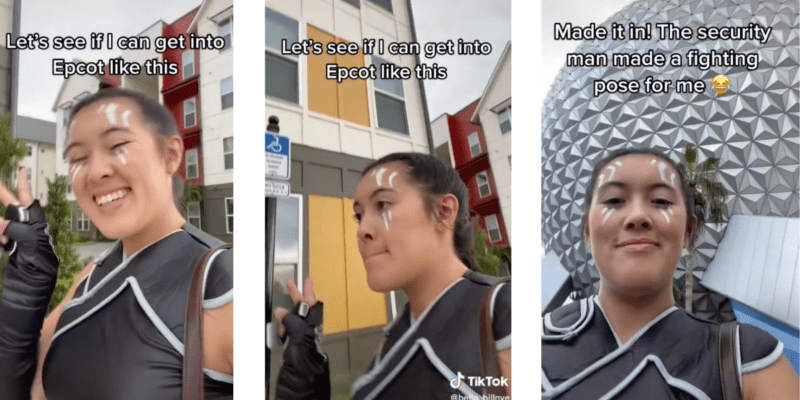 The Disney dress code has been a hot topic over the last year. It started with a TikTok trend that encouraged Walt Disney World Resort and Disneyland Resort Guests to wear inappropriate tops to receive a free tee shirt. The movement got so popular this spring that Disney Park Cast Members were instructed to stop giving out free clothing.

Over the past month, multiple Guests have gone viral for breaking the Disney dress code in different ways. One influencer wore a floor-length ball gown that she had to remove because it was dragging on the ground. A male Guest went viral for wearing a profane AR-15 shirt, though it’s uncertain if he was asked to change.

Now, yet another TikTok creator is turning heads. @bella_billnye shared a video of herself dressed as Marvel’s Valkyrie, writing, “Let’s see if I can get into EPCOT like this:”

Later, the TikToker shared another video of herself at EPCOT in costume, writing, “Made it in! The security man made a fighting pose for me 😂:”

On another day, the same TikToker wore her Valkyrie costume to Magic Kingdom and shared a video of herself on Mad Tea Party:

Though security allowed this Guest to enter the Disney Parks, adults are only allowed to wear costumes at Mickey’s Not So Scary Halloween Party and other special events. Disney Bounding, a trend in which Guests wear clothing inspired by their favorite characters, is permitted.

Because Valkyrie is a lesser known Marvel character, Disney Security Cast Members simply may not have recognized that this Guest was in costume.

More on the Disney Dress Code

For your safety and the safety of other Guests, it’s best to follow the dress code when visiting the Disney Parks.