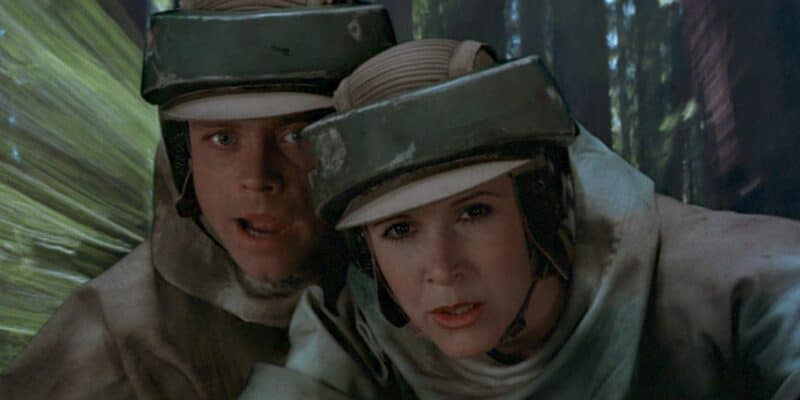 Arguably, one of the most iconic moments in all of cinematic history occurs in Star Wars: Episode V – The Empire Strikes Back (1980) when Luke Skywalker (Mark Hamill) is fighting Darth Vader (David Prowse/James Earl Jones) on Bespin.

Over the course of the scene, the Sith Lord infamously cuts off Skywalker’s hand and utters one of the most legendary lines in movie history — “No, I am your father.”

Luke, whose twin sister, Alderaan’s Princess Leia Organa (Carrie Fisher), is not present during the scene, is still blissfully unaware of the duo’s parentage. She does, however, ultimately discover who her biological father is — she was adopted by Bail Organa (Jimmy Smits) — after the Rebels win the Battle of Endor in Star Wars: Episode VI – Return of the Jedi (1983).

The scene in which Leia discovers she is the daughter of the Dark Lord of the Sith is not actually shown onscreen, however. Now, though, the Star Wars franchise has officially canonized the moment when Luke tells Leia who their father is.

In a lenghty excerpt from upcoming novel “The Princess and the Scoundrel,” which is set just after the events of Return of the Jedi, Star Wars has finally shared exactly how the young royal learned about her parental figure.

“”How are you?” Luke’s voice was sincere, but Leia wasn’t sure how to answer him. This was supposed to be a triumph, but all she really felt was confused. Not just about what Luke had told her about her lineage – their connection was something she’d felt for some time, and it had been easy to accept Luke as her brother. She would not think about what that meant of her biological father. No – it wasn’t just that.

Leia nodded. She had told Luke that she didn’t – couldn’t – understand the power he had, but he seemed eerily calm and confident that she could actually wield the Force as he did. Leia might not have any real experience with the Force, but there was no denying the power Luke had… the power she felt, too, like a fluttering of flitterfly wings just on the edge of her consciousness. Waiting for her to seize it.

“He told me to tell you -” Luke started, but Leia’s head whipped up, eyes fierce as she glared at him.

“They were his last words. He wanted me to tell you -“

“He was good,” Luke insisted. “There was still good in him, after all…”

My father was good, Leia thought, but in her mind she pictured Bail Organa, not Darth Vader. Thinking of Bail made her think of Breha, her mother. Of her home. Of everything she had lost.

When she had spoken to Luke earlier this night, Leia had told him that she remembered the mother they shared, their birth mother. It had been vague images, feelings, really, nothing more. But she did have a memory – of love, of closeness, of things she could not describe. It was impossible to put her feelings into words, but there was no denying their truth. It felt like… a connection, a bond made of light.

Yet Luke, who was a Jedi Knight, strong in the Force, had no memory of the woman who had birthed them both.

When 25-year-old Hamill was cast in George Lucas’s Star Wars: Episode IV – A New Hope (1977), he could never have imagined what the Star Wars franchise would become. Alongside Fisher and Harrison Ford (Han Solo), Hamill skyrocketed to stardom, ultimately turning into a pop culture icon.

Ford and Hamill’s futures in the Star Wars universe remain uncertain at this time, although a CGI de-aged version of Skywalker features heavily in Jon Favreau and Dave Filoni’s The Mandalorian saga on Disney+.

What iconic Star Wars moment would you like to see canonized?