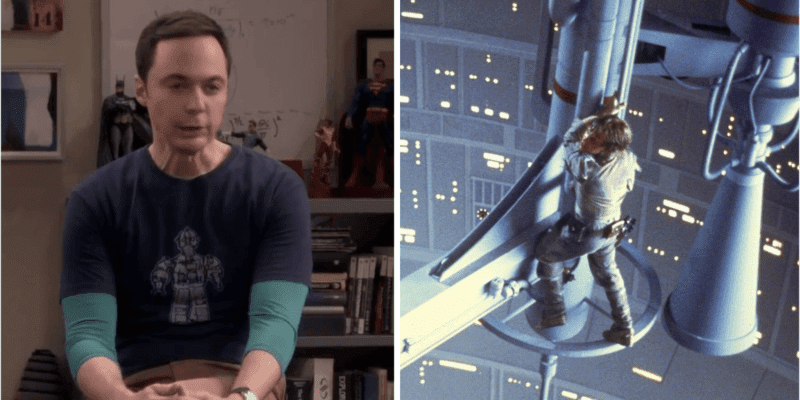 If you’re a nerd, you probably watched The Big Bang Theory. The long-running television series aired on CBS from September 2007 to May 2019.

In a particular Season 11 episode, “The Relaxation Integration,” Sheldon refers to himself as the “caucasian James Earl Jones” — you know you just read that in his voice — before saying “Luke, I am your father.”

As most Star Wars fans already know, this iconic cinematic moment, which occurs in Star Wars: Episode V – The Empire Strikes Back (1980), actually features the line, “No, I am your father.” Now, the Big Bang Theory error has resurfaced online.

This is a prime example of the Mandela Effect, which occurs when a collective misremembers an event, idea, or, in this case, line from a movie…

Ever since the episode aired, fans have posted about the Big Bang Theory Star Wars mistake on social media.

Shame on the @bigbangtheory writers. Sheldon would’ve known that “Luke, I am your father” is a misquote, and used the right one

Shame on the @bigbangtheory writers. Sheldon would've known that "Luke, I am your father" is a misquote, and used the right one. #StarWars

Related: Laugh It Up, Fuzzball: A “Star Wars” Comedy Might Be in the Works

Disappointed @bigbangtheory. Sheldon would never say “Luke, I am your father” because it is not in any of the Star Wars movies.

Disappointed @bigbangtheory. Sheldon would never say "Luke, I am your father" because it is not in any of the Star Wars movies.

So Sheldon just misquoted Star Wars: Empire Strikes Back by saying “Luke I am your Father”. Yes I know I’m an uber dork.

So #Sheldon just misquoted #StarWars #EmpireStrikesBack by saying "Luke I am your Father". Yes I know I'm an uber dork. #BigBangTheory

The original trilogy blunder, however, didn’t deter The Big Bang Theory’s success moving into it’s final season. Main character Sheldon Cooper even has a spinoff, Young Sheldon, that is still on the air.

As Deadline shared in an article about HBOMax obtaining exclusive streaming rights for the show:

The Big Bang Theory, created by Lorre and Bill Prady, premiered on CBS in September 2007. It ranks as the longest running multi-camera comedy series in U.S. TV history and ended its 12-season run as the most watched 2018-19 entertainment series, the first show to be able to make that claim in 21 years.

As far as Star Wars goes, George Lucas’s Empire Strikes Back remains one of the most popular movies in the Skywalker Saga. Featuring Mark Hamill, Harrison Ford, and the late Carrie Fisher reprising their Star Wars: Episode IV – A New Hope (1977) roles as Luke Skywalker, Han Solo, and Princess Leia Organa, the film is one of the rare sequels that just might be even better than the original.

Did you notice this Big Bang Theory Star Wars blunder when the episode originally aired?