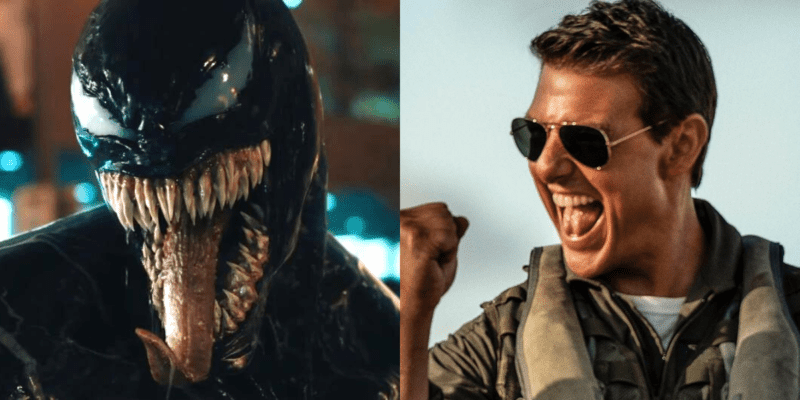 Hollywood is back! The world of cinema is rebounding with historic success for virtually every movie released after Top Gun: Maverick (2022) following the COVID-19 pandemic, but Sony claims they’re the ones to thank for saving “the movie business.”

Venom: Let There Be Carnage (2021) was released in theaters on October 1, 2021, after numerous theatrical delays due to the COVID-19 global pandemic, but it ushered in the re-emergence of moviegoing for countless audiences. Paving the way for Spider-Man: No Way Home (2021), the movie theater slowly began to feel like home again for many.

In the wake of Top Gun: Maverick grossing over a reported $1.1 billion at the box office and breaking domestic records, Sony Motion Group President Sanford Panitch has come forward to claim that Venom: Let There Be Carnage is to thank for saving the cinema:

“In a weird way, I would say #TopGunMaverick is benefitting from us taking our shot. Venom 2 is the start of that story.”

“In a weird way, I would say #TopGunMaverick is benefitting from us taking our shot. Venom 2 is the start of that story.”

What some may not realize is that Marvel Studios beat Sony Pictures to the box office with Shang-Chi and the Legend of the Ten Rings (2021), which hit theaters on August 21, 2021, marking the first Marvel Cinematic Universe film to release theatrically since the COVID-19 pandemic.

Nonetheless, without Shang-Chi ushering in audiences and helping weary viewers feel a bit safer in a movie theater, Marvel and Sony couldn’t have released Spider-Man: No Way Home and received such historical success.

Quickly becoming one of the most profitable Marvel movies to date, No Way Home became the highest-grossing movie of the pandemic era, busting open the door for Top Gun: Maverick, Everything Everywhere All At Once (2022), Jurassic World: Dominion (2022), Elvis (2022), Doctor Strange in the Multiverse of Madness (2022), Minions: The Rise of Gru (2022), The Northman (2022), and more.

But, a considerable portion of this success belongs to The Batman (2022), Matt Reeves, and Robert Pattinson’s game-changing superhero partnership that grossed over $770 million—without audiences flocking to the theaters worldwide in March 2022, much of the Hollywood success seen today for virtually every new film — such as Ethan Hawke’s Black Phone (2022) film that’s recently earned over $100 million worldwide (made on a reported $18 million budget).

Never in my life I would expect Venom 2 and Top Gun Maverick in the same sentence pic.twitter.com/raq0LopUjZ

This is what we call a load of crap. Venom has nothing to do with Top Gun’s success. Completely different audiences

This is what we call a load of crap. Venom has nothing to do with Top Gun’s success. Completely different audiences

Godzilla did it first, sorry everyone

Godzilla did it first, sorry everyone pic.twitter.com/j5lW5dczfX

It’s worth noting that the first big blockbuster to hit theaters was Warner Bros.’s Godzilla vs. Kong (2021), which scored an impressive $468 million, considering a majority of worldwide theaters were still closed.

On top of that, Christopher Nolan’s jaw-dropping and instantly iconic TENET (2021) lit the fire for movies to return to the big screen after debuting in a still closed world.

Nonetheless, it’s clear that without the Venom sequel, every Marvel fan may have had to wait longer for Spider-Man: No Way Home to hit theaters.

Do you think Venom 2 saved the cinema? Comment below!