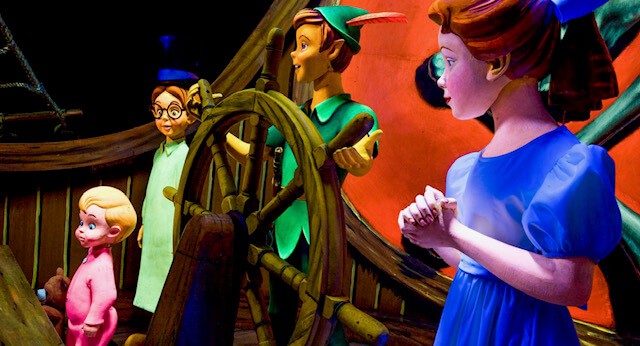 Disneyland is home to many beloved classic attractions, including Pirates of the Caribbean, The Haunted Mansion, “it’s a small world,” Matterhorn Bobsleds, and so many more!

Perhaps one of the most popular attractions at Disneyland is Peter Pan’s Flight, which opened in 1955 and is operational to this day. On it, fans of the Peter Pan (1953) movie can travel to Neverland with Peter, Tinkerbell, Wendy, John, Michael, The Lost Boys, Captain Hook, and Mr. Smee. However, this beloved attraction recently fueled a terrifying episode for one Guest.

Redditor u/kaylie_strongs posted about their experience during a malfunction while riding Peter Pan’s Flight in Fantasyland. Kaylie was even able to take a few pictures during the time she remained stuck on the attraction and commented it had been “a cool feat,” except for the fact that she constantly had to calm down her three-year-old niece. The latter was terrified by the idea they could fall off the flying boats and needed constant reminders that everything would be okay.

The original poster didn’t comment on the result of this sudden stop. Still, the most probable scenario is that the ride resumed its normal operations after a short time, and these Guests didn’t need to be evacuated.

u/agardengirl commented that she had experienced the same breakdown and probably even was there at the same time as Kaylie. u/Yeahimo added that, the previous week, they had experienced the attraction with none of the dialogs operating and that it was highly off-putting.

Unfortunately, ride breakdowns are not uncommon at Disneyland. We recently reported on one lucky Guest who was able to find a beloved Disney character inside this attraction, apart from the hidden Mickey on the clock tower at the London scene of the ride. You can read more about that experience here.

It’s bedtime in the Darling children’s nursery, but Wendy, Michael, and John have some unexpected visitors! Join them on a high-flying adventure—with the help of a little pixie dust—through scenes and songs made famous in Disney’s animated film, Peter Pan.

Disneyland Park is currently making significant improvements to several attractions, with Pirates of the Caribbean closed for refurbishment and Tarzan’s Treehouse waiting for a complete reimagining. Toontown is also gearing up for a massive change that will be revealed in 2023 with the reopening of the land and the debut of Mickey and Minnie’s Runaway Railway. However, there is still so much for Guests to enjoy! Walking up to Sleeping Beauty Castle is always a dream, especially when you get to go inside and relive the story of Aurora and Maleficent. Riding classics like “it’s a small world,” Mr. Toad’s Wild Ride, The Haunted Mansion, Matterhorn Bobsleds, Splash Mountain, and more will have you feeling the magic and craving a churro!

Comments Off on Guest Terrified During Disneyland Ride Breakdown