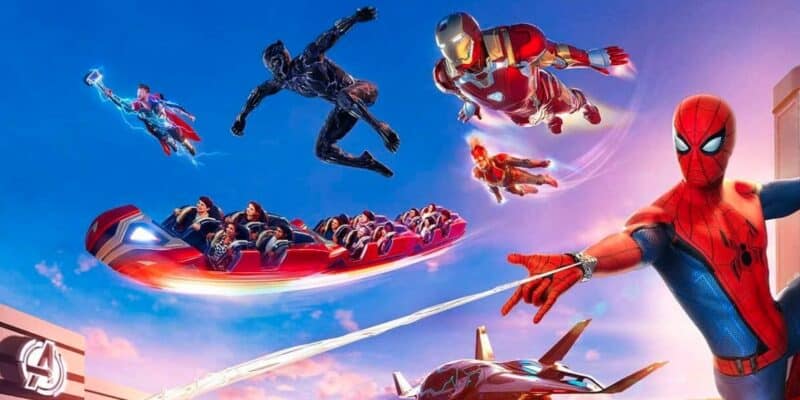 When Avengers Campus opened at Disneyland in California, Guests were welcomed into a world of Marvel, complete with fan-favorite characters and incredible experiences. One of the most talked-about features of this new land was, without a doubt, the Spider-Man “stuntronic” that flies high above Avengers Campus.

Avengers Campus is home to the Earth’s Mightiest Heroes, including an all-new, groundbreaking attraction centered on your friendly neighborhood Spider-Man. While WEB SLINGERS: A Spider-Man Adventure features revolutionary technology that’s creating new, immersive experiences, the Spider-Man stuntronic is stopping people in their tracks!

Unfortunately, this incredible work of Disney Imagineering is missing from the latest version of Avengers Campus at Disneyland Paris as reported by Pixiedust.be. Early previews have been underway the last few weeks at the new land, with Paris’ version officially opening tomorrow, July 20, 2022. The Spider-Man “stuntronic” has been M.I.A. the entire time, and considering many think the new Avengers Campus had a lower budget and fewer resources than Disneyland’s version, this omission makes some sense.

A behind-the-scenes look at this incredible animatronic can be seen below from the official Disney Parks YouTube channel: