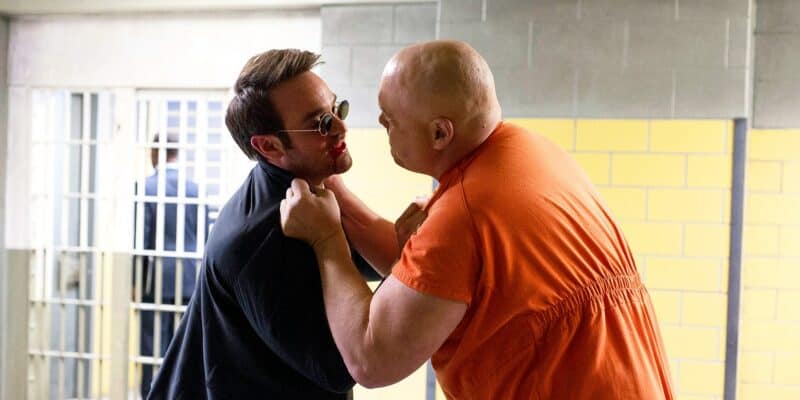 The Marvel Cinematic Universe got a whole lot bigger with the addition of Daredevil and the Defenders franchise on Disney+, bringing over Hell’s Kitchen into the Marvel collection. Now, Daredevil and Kingpin are officially returning in the upcoming Echo series.

Marvel Studios was never the same after the landmark addition of Daredevil on Netflix. Though not officially a part of the Marvel Cinematic Universe until 2021, with the addition of Matt Murdock (Charlie Cox) in Spider-Man: No Way Home (2021), virtually every Marvel fan considered Daredevil the most excellent Marvel project to date.

With Matt Murdock being a “really good lawyer” to Peter Parker (Tom Holland) in No Way Home and Wilson Fisk/Kingpin (Vincent D’Onofrio) making his MCU debut in Hawkeye, fans were itching to know when the Man Without Fear would faceoff against Hell Kitchen’s big boss once again.

After months of speculation and some pretty intense rumors, The Hollywood Reporter has confirmed that actors Charlie Cox and Vincent D’Onofrio are returning to the Marvel Universe as their iconic roles in Echo, a brand new streaming series hitting Disney+ in 2023.

It’s official, Daredevil and Kingpin will be sharing the screen in Echo:

Charlie Cox and Vincent D’Onofrio are now confirmed to return as Daredevil and Kingpin in #Echo.

Charlie Cox and Vincent D’Onofrio, who portrayed classic Marvel Comics characters Daredevil and The Kingpin, respectively, have joined the series, which stars Hawkeye breakout Alaqua Cox as Maya Lopez. Marvel had no comment.

The move is the latest sign of Marvel Studios’ efforts to weave in popular characters from Netflix’s now-defunct Marvel shows such as Daredevil into the fold. Sources say Echo will include a plotline in which Daredevil, whose alter ego is blind attorney Matt Murdock, is searching out a former ally. Podcast The Weekly Planet has reported that ally is Jessica Jones, another Marvel character who toplined her own Netflix series and was played by Krysten Ritter. If Ritter as Jones does indeed make an appearance in Echo, that would leave Luke Cage, Iron Fist, and the Punisher as the street-level crime-fighters still left to be re-introduced into the Marvel Cinematic Universe.

While Marvel Studios has not released an official statement concerning The Hollywood Reporter stating that Cox and D’Onofrio returning as their respective roles in Echo, it’s clear that Daredevil is coming to Disney+ in a bigger way than originally believed (nonetheless, take this news lightly until Marvel makes an official announcement).

With reports of a “soft reboot” of the Netflix Daredevil streaming series coming to Disney+ with Charlie Cox at the lead, it’s unclear which version of these beloved characters fans will see.

Could Echo be the first mature and truly violent Disney+ superhero series? Given that removing the brutal violence from Daredevil would be like taking all of Frank Castle’s guns away, fans will want their character up on the streaming screen as he undoubtedly goes toe-to-toe with Kingpin.

Kingpin’s involvement in Echo could center around recent reports of the crime boss potentially running for New York City mayor in an upcoming Marvel project. Could Echo be the catalyst of change for new MCU stories? The Hawkeye spinoff is sure to pack a massive punch for Daredevil fans.

New reports suggest that Charlie Cox is not only appearing in Echo, but also in the upcoming She-Hulk series as attorney Matt Murdock as the Hell’s Kitchen pro takes on lawyer Jennifer Walters (Tatiana Maslany) in Marvel’s New York.

Whether or not the character will appear as Daredevil in She-Hulk is unclear, but with rumors suggesting that Murdock will share the Hulk screen, fans couldn’t be happier.

Now, Cox is returning for Daredevil season four, which is currently in pre-production at Marvel Studios.